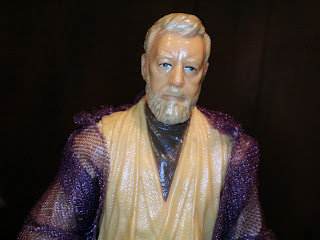 We're now less than a month away from the release of Star Wars Episode VIII: The Last Jedi! I don't know about you but I'm insanely excited. I read all of the new canon books and having just recently finished The Legends of Luke Skywalker by Ken Liu, I'm even more excited to how the new film truly portrays the aged Jedi master. Today's toy review isn't about Luke, though; it's about his original mentor Obi-Wan Kenobi. For the past few years Walgreens has had an annual Star Wars: The Black Series exclusive figure and this year's figure is the Force Spirit version of Obi-Wan Kenobi. While this is largely a repaint of the previously released Obi-Wan Kenobi figure that first showed up at SDCC 2016, the paint work here really helps this one to stand out. I still remember receiving my Spirit of Obi-Wan action figure from Frito Lays in 1997, so this one feels a bit nostalgic to me. Hasbro has tried different methods of capturing the Force Spirit versions of Obi-Wan, Yoda, and Anakin over the years this might be their best attempt. More after the break... 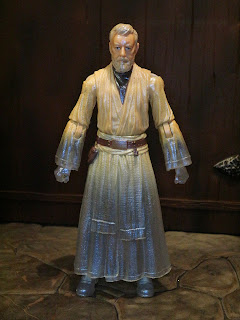 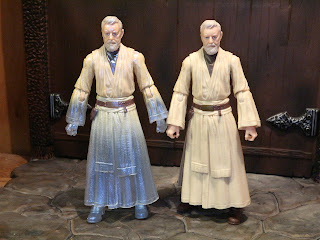 * Here's a side by side shot of the standard Black Series Obi-Wan Kenobi (right) and the new Force Spirit version (on the left). As you can see, they are the exact same sculpt. For more details on the sculpt and articulation, check out my review of that figure. Today I'm only going to be covering what is new and different. 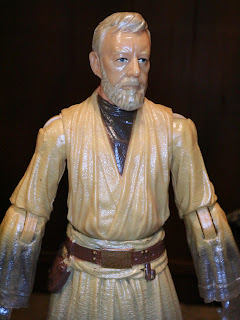 * To give Obi-Wan a ghostly appearance Hasbro has utilized two different techniques: Molding the figure in translucent blue plastic and giving the figure a heightened, glossy sheen to make the figure appear more spirit-like. The upper half of Obi-Wan's body features the glossy paint that almost gives the figure a holographic-like appearance. It works well, though, and makes for an impressive appearance that mimics the film version quite well. 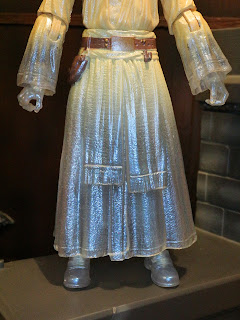 * The lower half of the body borrows the translucent body technique from the 1997 figure and adds some paint over it to give Obi-Wan a very spectral appearance. 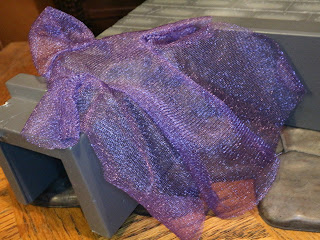 * I don't think it's the most accurate way to handle Obi-Wan's Jedi cloak but I will give Hasbro credit for crafting a new, unique fabric accessory fro Obi-Wan Kenobi. This robe is made from a sheer, somewhat sparkly fabric and it definitely conveys the appropriate incorporeal appearance when on the figure. When off the figure, it looks like part of some sort of space lingerie. 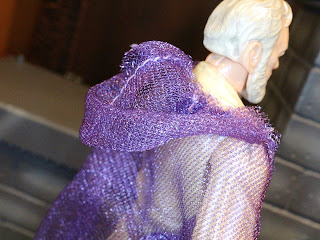 * Considering that Hasbro crafted a new robe for this version of Obi-Wan, I do wish they would have found a way to make the hood lay flatter. I don't recall Obi-Wan wearing his hood in this form, so the hood really could have been just part of the design rather than needing to be functional. 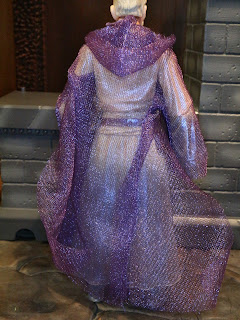 * From the back, Obi-Wan's robe looks less impressive. You can really tell that this is a sheer material rather than part of his spectral form. This definitely is a bit off looking, isn't it? 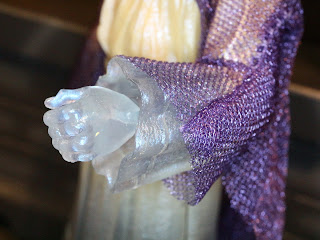 Note!: Be careful if you take the robe off. It is removable but the sleeves are very night. It seems possibly to rip the sleeves of the robe when pulling it over Obi-Wan's forearms. 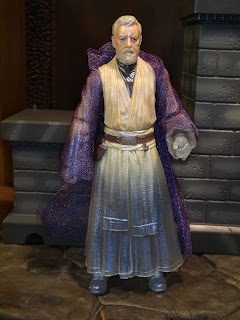 I really like how this figure turned out. He's not the most exciting figure in the world but he's still a Good and a 1/2 addition to the ever growing 6-inch Black Series line. Hasbro used a few different tricks in attempting to capture the glowing, luminescent appearance of Obi-Wan Kenobi as a Force Spirit and I think they did a pretty nice job. If you liked the previous Obi-Wan Kenobi figure, I can't imagine you'd find much fault with this one. Considering they've given us the Prototype Armor Boba Fett, Emperor's Wrath Darth Vader, and the first release of the standard C-3PO, Walgreens has truly become a friend to Star Wars collectors. I'd love for them to get more exclusives as no matter what company or property, they seem to be really good at keeping their aisles stocked.