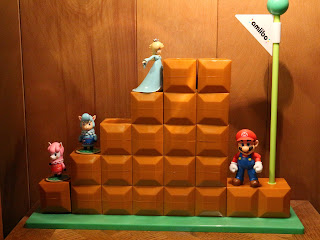 Recently I picked up a Nintendo Switch. I'm really enjoying it as it's a system with plenty of high quality games that I can play along with my four year old. Right now we're mostly playing Super Mario Odyssey and the game takes advantage of Nintendo's amiibo collection to allow you to obtain a bonus power-up, unlock special costumes early, or even obtain hints on where to find the games numerous hidden moons. I picked up a few of the Animal Crossing amiibo figures earlier this year both due to playing Animal Crossing: New Leaf and my desire to add them to my World of Nintendo collection, and now I've picked up a few more to add to the collection. Today I'm looking at a cool display base for the amiibo figures that is modeled after the flagpole and stairs that appeared at the end of the levels in the original Super Mario Bros. videogame. While it is branded as an officially licensed Nintendo amiibo product, it was actually produced by the company PowerA. Does that make this a second party item? I actually picked it up more to use with my World of Nintendo figures rather than to use with my amiibos, but it works great with both collections. Let's take a look at it after the break... 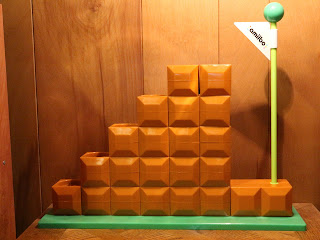 Includes: Base, 20 single blocks, flagpole block, and a flag pole. 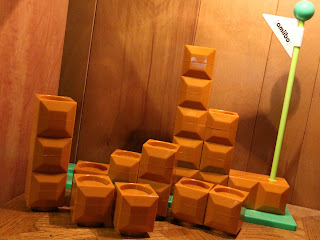 * The first thing that's really cool about this set is that it is very modular in nature. Besides the two connected blocks that hold the flagpole, the rest of the blocks are single, allowing you to creature your own displays if you want to. While the intended display is meant to look like the end of level staircases from Super Mario Bros., you really can build a number of different things set ups with these. 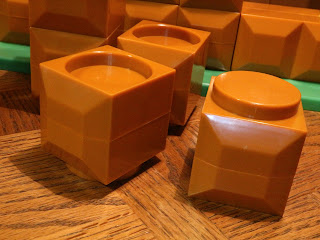 * The blocks are very high quality. they're not super heavy but they feel sturdy and well made, kind of like a Duplo Lego brick. There are two textured sides, two flat sides, a bottom male plug, and a top female socket which can hold another block or an amiibo. 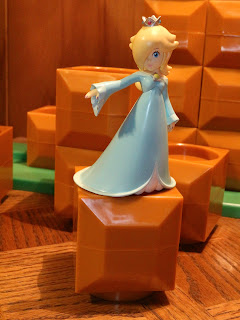 * The amiibos can slip right in since they have large rounded bases that easily fit into the top of these blocks. They look nice on display here and can easily be removed and put back. Note that the depending on how you organize the blocks, some larger amiibos may not be able to fit next to each other. 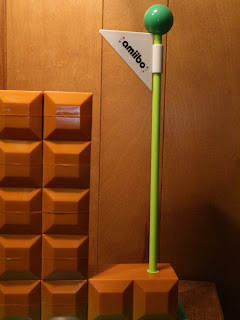 * The flag is a really cool touch. It's a simple green flagpole with a top and a triangular flag branded with the "amiibo" logo. It looks nice on display and should be instantly recognizable to any fan of vintage NES games. 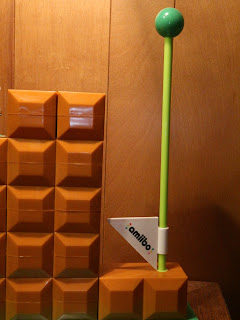 * Another really cool feature is that the flag can actually be lowered to the ground just like at the end of a Super Mario Bros. level. I love it! 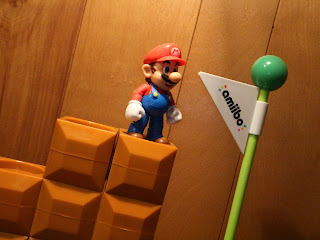 * I showed how the set is designed to work with amiibo figures above but here's a look at the End Level Display with the World of Nintendo Mario from series 1-1. This set looks great with those figures (and that the main reason I purchased it). 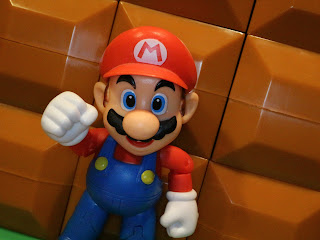 * The blocks look great, too. They make a perfect Nintendo styled backdrop for pictures or just displaying your figures. 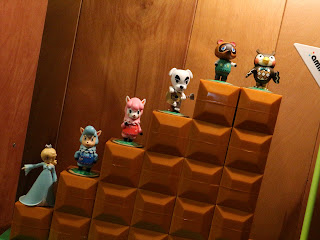 * The only thing I'd really consider a negative is that if you're really going to use this to display amiibos, it really only holds six. That's a pretty small amount of figures for such a large set. of course, you could always reorganize the blocks and do your own thing to try something that holds more. 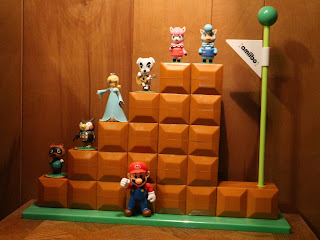 I actually picked this up at GameStop for $9.99 and, for that price, I'm not disappointed at all. It's a really fun display piece and a fun playset for action figures. It's well constructed, has a few fun features, and should be instantly recognizable to anyone who is even the least bit familiar with Super Mario Bros. This is a Great set! If you find it for the $10 price tag I found it at it's even better! The End Level Display was originally released in 2015 but it still seems to be fairly easy to find.