Unite the League: The Flash: From Page to Screen from DC Comics Multiverse by Mattel 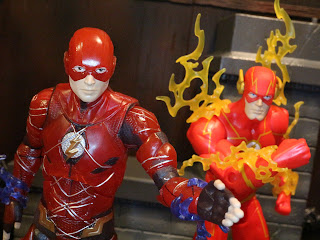 We're only a few days away from the release of Justice League and I, for one, am getting pretty excited. I think I have my expectations set at a reasonable level but I'm also getting pretty enthused that there is some good feedback coming from early showings of the film. Of course, whether the film is good or bad we're still getting toys and plenty of them. Overall Mattel's offerings for Justice League have been pretty bad but today I'm looking at a set they've released as a Target exclusive that is quite cool. It's called "The Flash: From Page to Screen" and it features both a comic version of the Flash and the film vision of the Flash. While this set features a good deal of reuse, there are also a few cool new parts, too. I've had this set since the end of October but I figured it might be a cool set to get us all pumped up for Justice Legaue. More fast fun coming after the break... 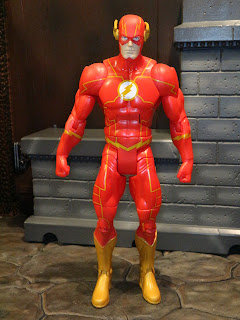 Accessories: Three lightning effects, a display stand, and a backdrop. 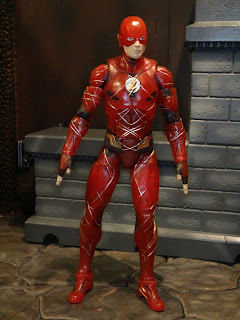 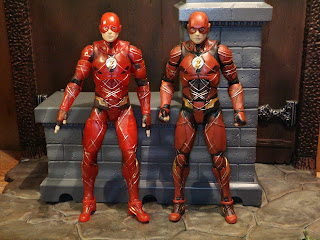 Other than the hands, the movie based Flash is a recast of the single packed figure that was part of the Steppenwolf Collect & Connect series. Rather than having a standard paintjob, this figure is molded in a translucent red plastic. It's actually a pretty cool look and nicely offers up something new for the set. Overall the figure has the same strengths and weaknesses of the standard release, so check out that review for the full scoop. 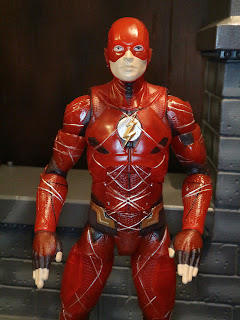 * Here's a look at the translucent body of the Ezra Miller version of the Flash from the Justice League film. The translucent plastic body actually makes for a very cool effect although it does look better in person than in pictures. The headsculpt doesn't look as sharp on this one but overall the quality is about the same as the basic figure. 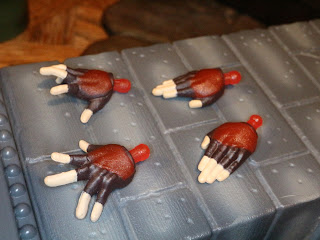 * Another really cool aspect of this figure that distinguishes from the standard release is the presence of two sets of unique, expressive hands. Rather than the fists on the standard release, this version of the Flash includes a pair of flat, "running" hands and a pair of open palms with fingers splayed apart. They swap easily and can even be swapped out with the hands on the standard figure. That's a pretty cool feature, right? 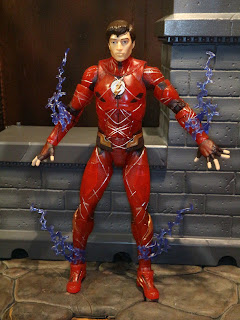 * Another cool feature this figure includes are some lightning crackle effects. The Flash includes four of them; one for each limb. They're molded in a soft, translucent blue plastic and easily fit around his arms and legs. I love these! They're reused from some older DC Universe Classics figures (Red Superman and Blue Superman, right?) but still work just fine! 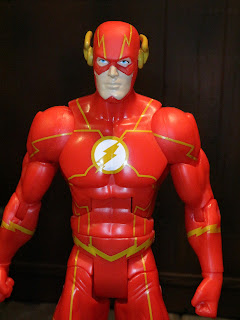 * The second figure is a Rebirth version of Barry Allen as the Flash. Like so many comic based figures, Barry features a body reused from an older DC Universe Classics figure. To be honest I'm still OK with this. While I don't like Mattel's standard movie/ TV series bodies, I like the DCUC style quite a bit. The build works pretty well for the Flash and the paintwork (there is little sculpted detail) is excellent. 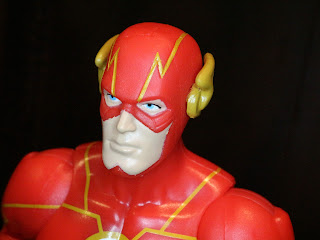 * The headsculpt is very classic looking (despite being from Rebirth) and fits right in with the DCUC line. The paint work is neat and clean and the wings on the sides of the hood are excellent. 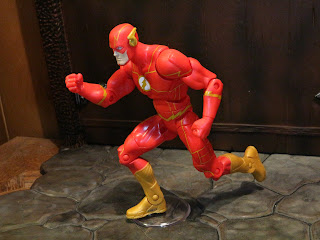 * The articulation is definitely a bit outdated but it still works pretty well. You can get some fine poses out of the figure and you'll enjoy playing around with the Flash. He's a durable, sturdy action figure. 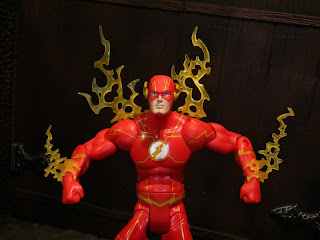 * Like the movie version of the Flash, this Rebirth version includes some lighting effects to simulate Barry hitting the Speed Force, too! These effects are yellow rather than blue and you get two for his hands or legs and one that plugs into a hole in his back. The lightning is all reused from the DCUC Red and Blue Superman figures although the "S" logo has been removed from the lightning bolt. 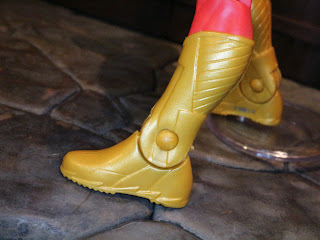 * The Flash actually has some unique boots that help to capture his Rebirth look a bit more faithfully. They're pretty slick and even have sculpted soles. 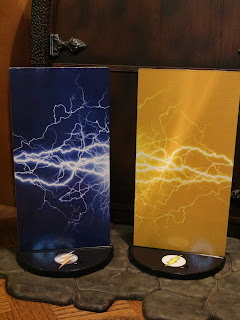 * The set includes two display stands and two backdrops. The movie Flash's base has the film styled Flash logo while the Rebirth Flash gets a classically styled logo. Both come with a 2-sided backdrop: One side with blue lightning and one side with yellow lightning. 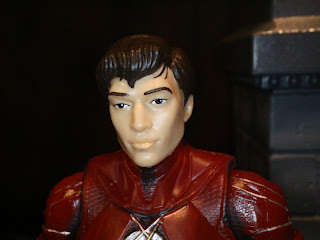 * The film based Flash includes an unmasked Barry Allen head that looks absolutely nothing like Ezra Miller. Honestly, it looks more like a young George Takei. Just a heads up: The head on the single packed Flash isn't removable so you can't put this head on the normal body. 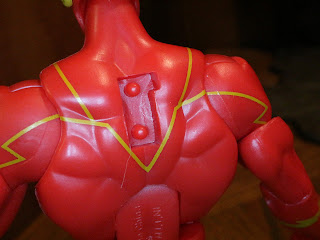 * Due to the removable lightning effect there is a fairly large indention on the back. It's not too big of a deal but some folks will be turned off by it. 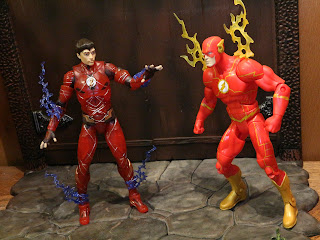 Honestly, this is a pretty Great set. It's not perfect but for fans of the Flash it's really quite cool. Usually only Batamn seems to get something like this so seeing the Flash with a cool evolutions styled set is a real winner. Both figures have some minor flaws but there is also a lot of good stuff here too, particularly the cool lightning effects and the new paintsjobs on the figures. These are well worth picking up on your way to or from the theater to see Justice League this Friday! Let's all cross out fingers and hope for the best!

If you're looking for more reviews featuring the Flash, I've looked at the standard Justice League Flash, the Mezco One:12 Collective The Flash, the DC Comics Multiverse DK2 Flash, the Lego DC Universe Riddler Chase which comes with a minifigure Flash, the Lil Bombshells Flash (Jesse Quick), and the Nano Metalfigs Flash by himself or as part of Five Pack A!