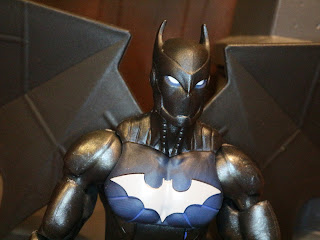 I have been anxiously anticipating this Batwing figure ever since Mattel announced it. I am still absolutely flummoxed by the fact that DC Collectibles was consistently releasing figures from the New 52 and yet they never got around to releasing Batwing. The dude is a member of the Batman family who had his own title. How could that not be a winning choice? It's possibly due to the fact that since Batwing's introduction two different individuals have worn the suit. David Zavimbe was the first Batwing who was part of Batman Incorporated. The second, and current, Batwing is Luke Fox. the son of Lucius Fox, Luke stepped into the Batwing role in issue #19 of the Batwing series and became a major player throughout the Bat-family stories. In Rebirth he has stepped into the Detective Comics team and continues to be a major player. Sadly, this isn't a very good figure. It's incredibly disappointing and has some truly strange manufacturing issues that have me worried for what Mattel might release in the future. Read on and learn more after the break... 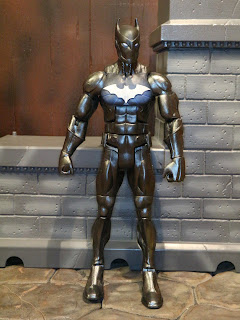 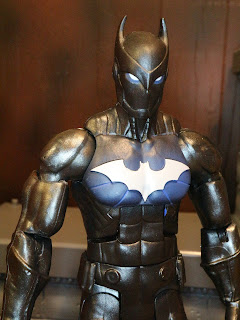 
* From the waist up Batwing looks pretty cool. The head sculpt is solid and the chest plate is actually raised with some nice paintwork to give off the impression that the Batsymbol is lit up with LED lighting. Mattel has definitely been upping he number of unique sculpts in the Multiverse line and it is definitely appreciated. 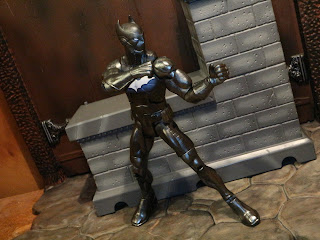 * While Batwing has the standard DCUC styled articulation that is pretty outdated at this point, he still does have a fair range of motion. The shoulders work really well and the balljointed head has a great range of motion. 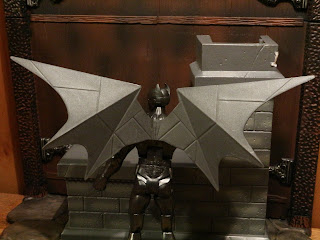 * Rather than a cape Batwing sports some massive... bat wings. These wings are one single solid piece that plugs into the figure's back. It stays put solidly and looks pretty cool on the figure. It's also fairly light weight, meaning the figure isn't just going to tip over backwards. 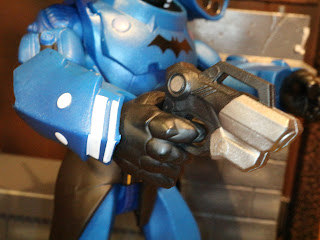 * Batwing includes both arms and the taser pistol for the Rookie. I'll review this guy fully once I review all of the other figures but, for now, let's just say he looks pretty cool. 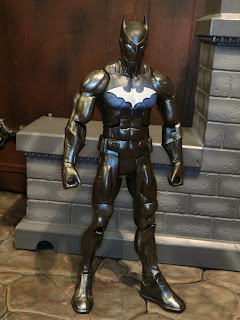 
* Here my biggest problem with this figure: He feels like he's made from a very light, very cheap plastic. Whenever you go to move a joint the plastic feels like it has too much give to it. When you just pick this guy up, or even look at the figure more closely, the plastic just seems to be overly light and of an inferior quality. It's tough for me to convey the problem in writing but if you picked this guy up without knowing what line he was from, I doubt you'd guess he was a Multiverse figure from Mattel. 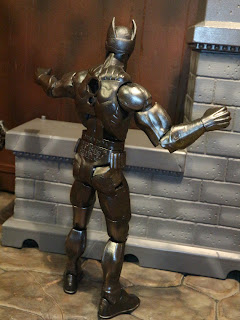 * Batwing really doesn't have much paintwork. Other than the chest symbol and his eyes, he's just the same color of plastic as he's molded in. Some highlights or something would have definitely helped improve the figures appearance. 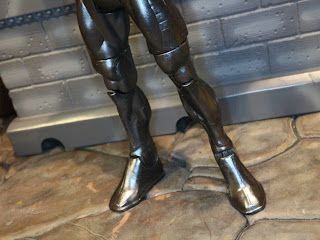 * The legs and boots look so, so plain. Very boring stuff here. Plus, the boots look a bit too oversized. 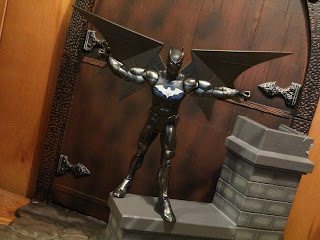 While I'm rough on Mattel's DC offerings, I am absolutely cheering for them to succeed. I definitely think they are currently the only company on the market who is willing and able to give us a diverse roster of figures from both past and current comics. They've got some great stuff coming out but they have to pay a bit more attention. Batwing should have been an absolute knockout. Instead, he's an Eh figure. Unless you're building the Rookie or desperately need a Batwing (this is the only version of him out there, too), this guy is a pass. That breaks my heart, too. Luke Fox deserves better than this.

This is the first Batwing figure I've reviewed. If you're looking for more DC Comics Multiverse figures, check out the following: