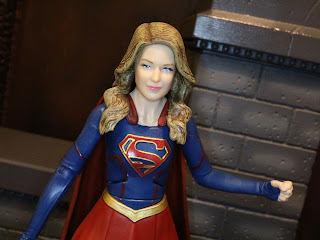 Last week while doing a little Christmas shopping with my daughter we stumbled upon a store called Bargain Hunt. It's a retailer that deals in closeout merchandise, kind of like an Essex, Ollie's, or Big Lots. They had a great selection of toys, however, and I ended up finding a DC Comics Multiverse Supergirl from the Supergirl TV series for $8 bucks. I readily admit that I'm terrible at keeping up with TV shows and thus I've never seen a single episode of the new Supergirl series starring Melissa Benoist. I think I'm going to have to change that as doing some research on the show in order to review this figure has me pretty intrigued. Supergirl was part of the Doomsday series of figures that were released last fall. I reviewed about half of that series at the time (Armored Batman, Robin, and the Mutant Leader) but I didn't pick up Supergirl, Superman: Doomed, or Lex Luthor in his prison duds. Now that I have Supergirl, let's check her out after the break... 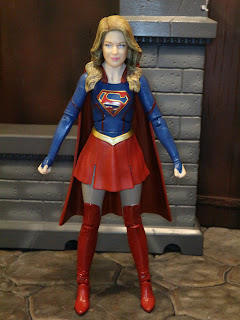 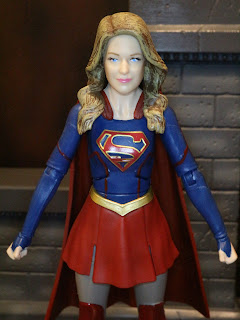 * Due to their use of unique sculpts on most of the DC Comics Multiverse figures, Mattel at least does each character's costume justice. This is a great looking rendition of the Supergirl costume! The red piping on the chest and arms might be a bit more prominent than it is on the show but everything else looks great. The paint colors are spot on and the paint applications are incredibly neat and clean. 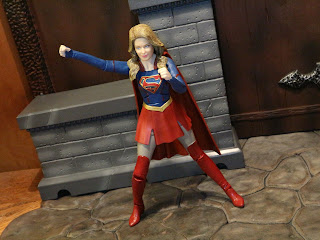 * The articulation is quite good. Actually, it's a bit better than usual due to the presence of some degree of swivel/hinge ankles. The ankles do rotate a bit, allowing for more stable poses that just look better. I wish every DC Multiverse figure had those. 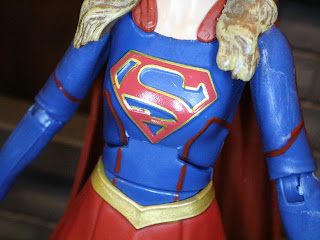 * The "S" logo and the piping are actually sculpted element s(not just painted on) and they look great. 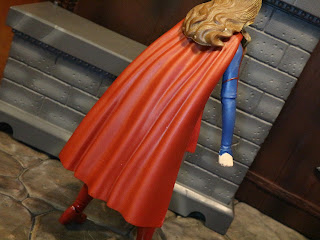 * Supergirl's cape turned out really good. It's a flexible plastic piece that isn't too large, doesn't jut out at an unusual angle, and has a nice level of detail. 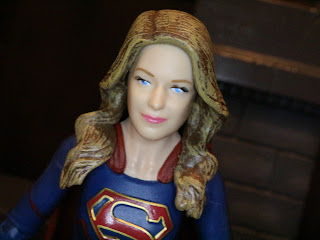 * This is Melissa Benoist who plays Supergirl.  Does this figure look like her? Kind of. First of all, the picture to the right is probably showing the figure much larger than it actually is. In person I think Mattel did a decent job of capturing Melissa Benoist. Not good enough that you would recognize this headsculpt on its own but definitely good enough that with the Supergirl body or if someone told you who it was, you'd say "Oh, I see it." 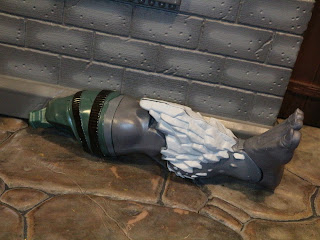 * Supergirl includes the left leg of Doomsday from the Collect & Connect figure. I actually sold my Doomsday parts last year, thinking I'd never build the figure, but now I kind of want to build him. 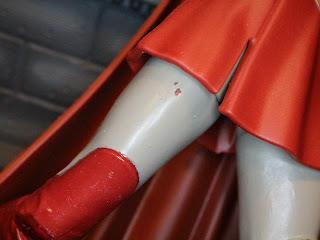 * There are definitely some instances of paint rub on Supergirl's tights. These seem to come from the skirt. Just a simple QC issue but a bit annoying. 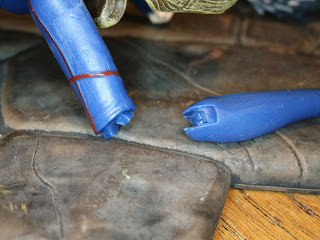 * I was all ready to declare Supergirl as one of the best DC Comics Multiverse figures out there and then something happened: Her right arm snapped at the elbow. This is the first DC Comics Multiverse figure I've had break and I haven't hear much about any widespread breakage, so it beats me why this happened. Fortunately, the way the hinge joint broke does allow for the lower arm to reattach just fine. Over half of these pictures were of the "broken" figure. Frustrating but since she's an older figure from a bargain bin store, not much I can do. 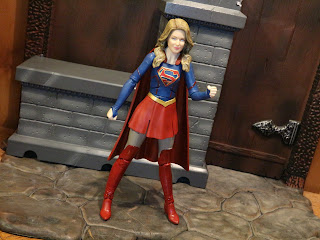 Despite the breakage (which I'm leaning towards being a one off QC issue or a simple stuck joint), Supergirl is still a really Good figure. The work on the costume and the articulation makes this seem like one of the best DC Comics Multiverse figures I've owned. Fortunately I can still display her and pose her to some extent, so I'm probably being a bit more lenient than usual. Still, if you missed this figure and collect DC Comics figures try to track her down. She's quite good!