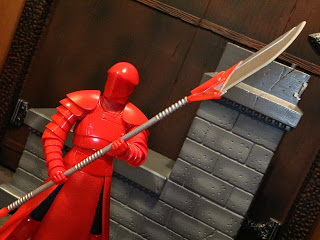 Like the First Order Stormtroopers for The Force Awakens and the Scarif Stormtroopers/ Shore Troopers for Rogue One, the Elite Praetorian Guards seem to be Hasbro's go to faceless minions for creating multiple variants for this year's Star Wars merchandising bonanza. Set to appear in The Last Jedi, we currently don't know much about the Elite Praetorian Guard other than there are eight of them, they use martial arts styled weapons, and they guard Supreme Leader Snoke while clad in red, just like the Emperor's Royal Guard.  The latest Elite Praetorian Guard variant is given the designation of coming with a heavy blade and is an Amazon exclusive. He just started shipping within the past week or two and you should still be able to pick him up. Let's take a closer look at what makes this guy unique after the break... 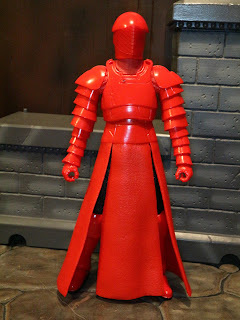 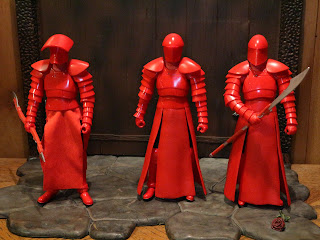 *Since this guy is largely the same as the previous to releases, for the full details check out my reviews of the standard Elite Praetorian Guard (right) and the Elite Praetorian Guard with Double Blade (left). The only difference between this figure and the standard Guard are the weapons, the had, and the neck. This figure comes in a standard Black Series box with a white cardboard box protector/ shipping box over it. 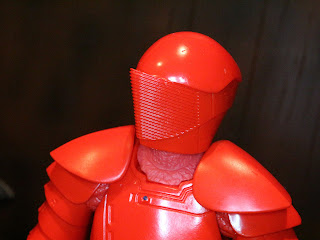 * This guard's helmet has a smaller round domed helmet and a grated mask that protrudes at the brow while tapering to a smaller size around the jawline. It's tough to capture the details in a picture due to the shiny, red glare but it's a cool looking sculpt. Oddly enough, the neck sculpt does appear to be different from that of the other two figures. 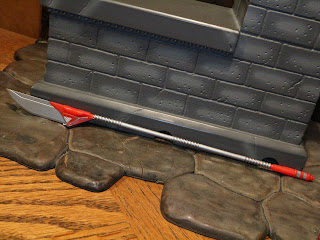 * The Elite Praetorian Guard/ EPG includes his titular heavy blade. It's a massive blade on a staff (8 3/8ths inches long!) that features some nice sculpted detail. It'll be interesting to see how these guys fight in the movie. I wonder if the weapons will be crafted of a lightsaber proof metal, perhaps an alloy along with something like cortosis. 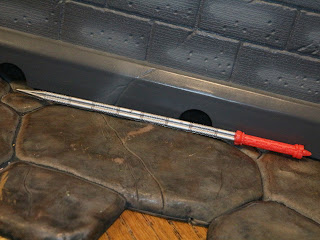 * This EPG includes a second weapon which I'm not sure if it's a version of the whip staff or a standard styled sword. It's a cool looking accessory and adds something else to the package. 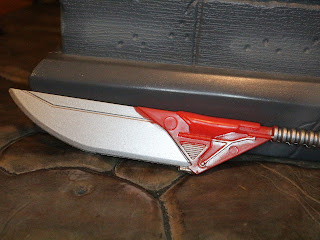 * The Heavy Blade has some much appreciated paint applications but the silver and red details on the blade are a bit messy. 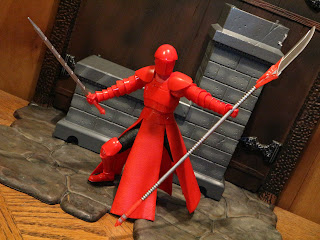 One of the odd things about this figure is that it costs about $5 more than your standard Black Series figure. I don't see the two weapons adding that much value, so this feels like a case of the dreaded "exclusive tax" rearing it's ugly head. Still, the Elite Praetorian Guard is a Good figure although one all but the most fervent collectors will probably be just fine skipping. Of course, if there are eight of these dudes in the film you know that collectors will want them all. After the visual dictionary for The Last Jedi comes out we'll see if we need to pick up duplicates to complete the team.

For more Star Wars: The Black Series figures check out the following: