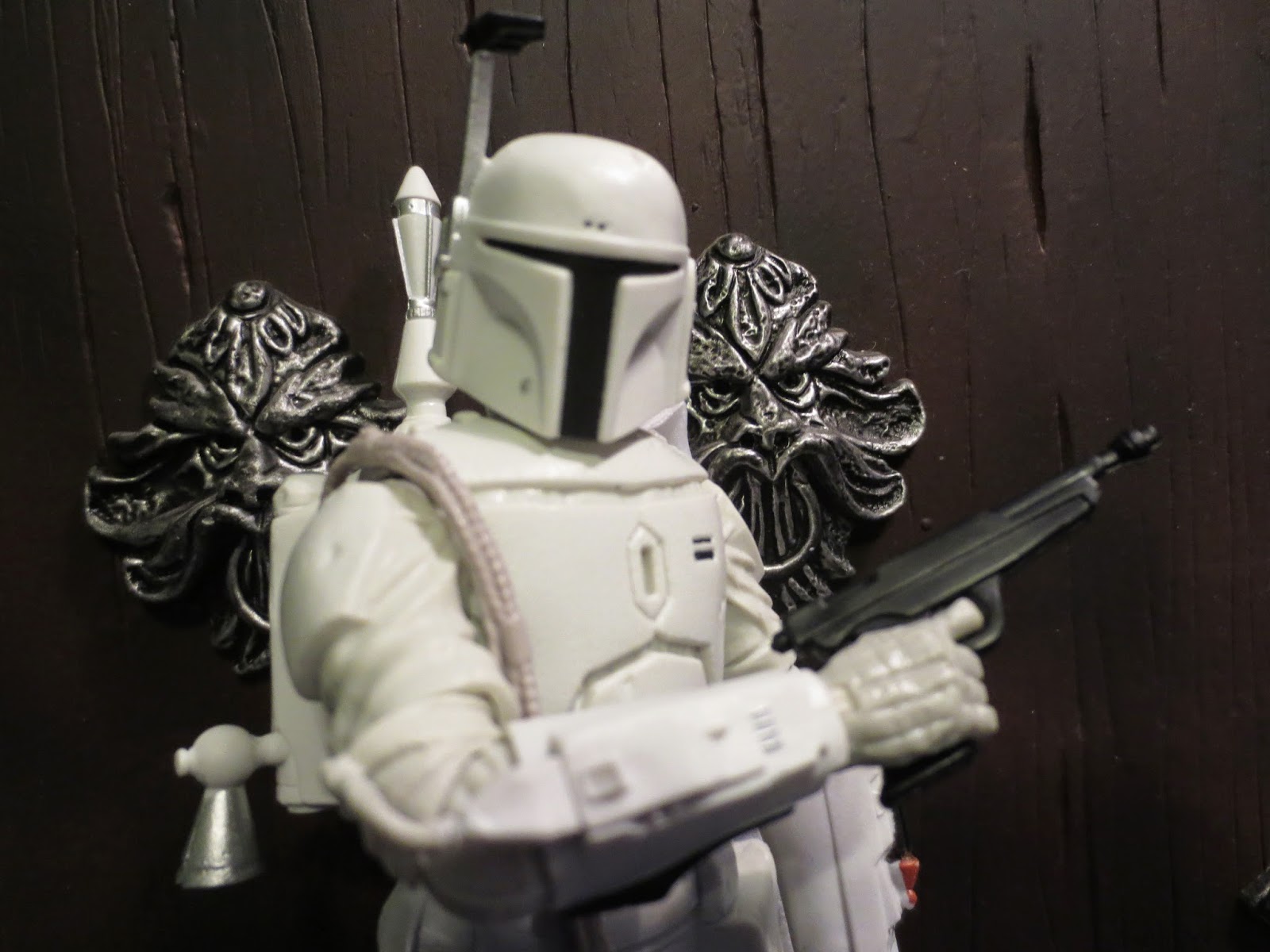 If you've read a few of my Star Wars: The Black Reviews or have heard me talk about the line on any episode of the Confirmed Epic Podcast, you'll know I'm pretty torn on the line. While I've loved all of the armored characters like the Sandtroopers, Stormtroopers, and Biker Scouts, I've been less then enthused by figures like Obi-Wan and Slave Leia. When this line is good, it's really, really good, but the rest of the time it just seems fairly mediocre. Fortunately, this Boba Fett in his Prototype Armor is quite good. He's a Walgreens exclusive and while he's been difficult to find for the past few months, stores are now starting to stock him in significant numbers. Packaged in The Black Series Phase II packaging (taller box with blue highlights instead of orange), Boba Fett in Prototype Armor is a great exclusive that also manages to be a fun figure. More after the break... 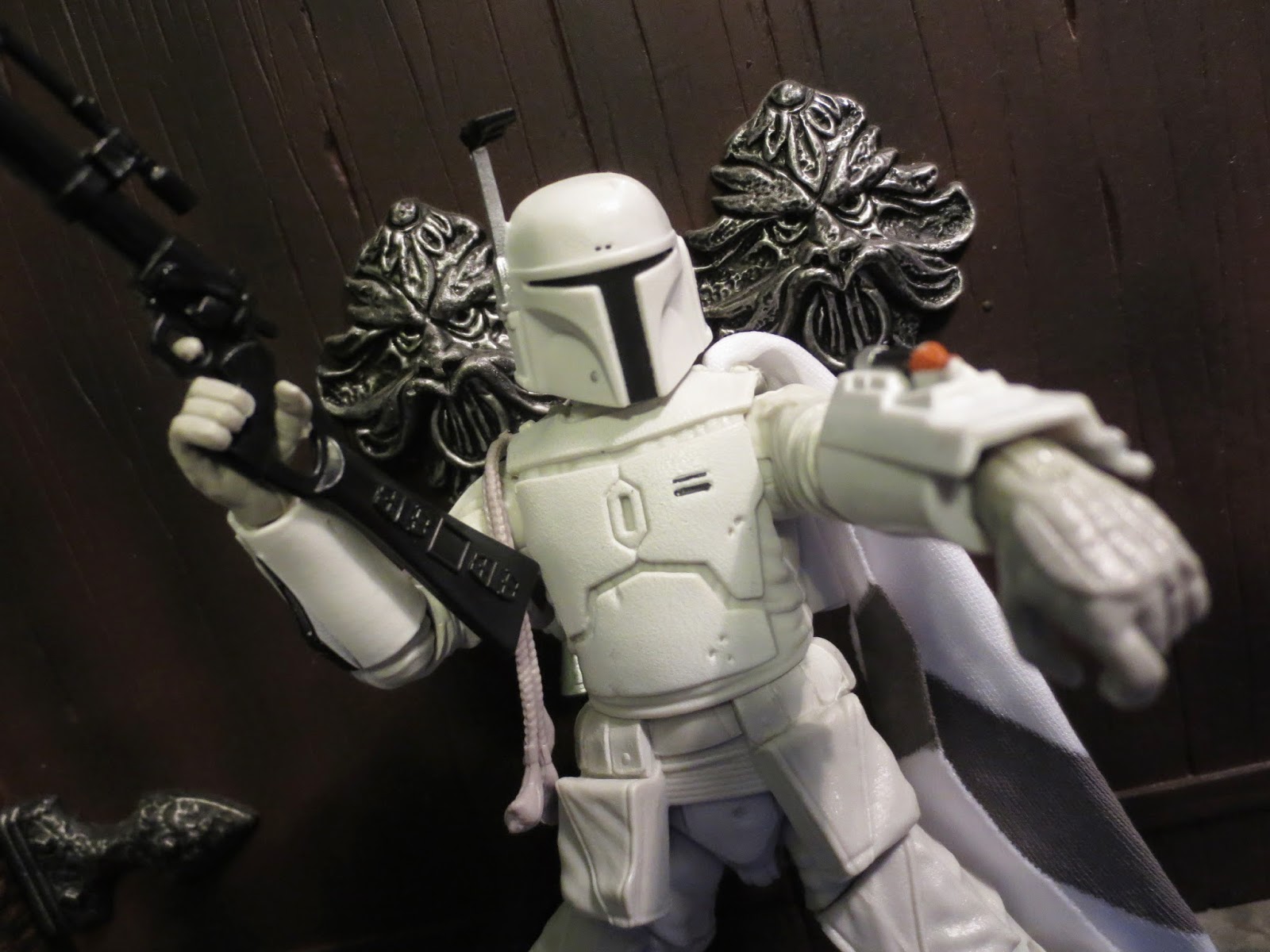 *As I mentioned in my review of the original The Black Series Boba Fett, this is a really fun figure. The articulation is well thought out and sturdy meaning that you can pose this guy over and over without any feat of breakage. I'm the kind of person that always loves to mess around posing and reposing an action figure while I'm watching a move, sitting on a conference call, or just killing time, and Boba Fett certainly is both durable and entertaining.

*The paint job is really striking and appealing here. While the subdued white color contrasts well with the black packaging, a closer examination reveals lots of nicely painted minor details such as all of the doodads that Fett keeps in the pouches on his legs. The cape is also well done and, while it's not the Star Wars towel that the real prototype armor used, it probably looks better for the action figure. 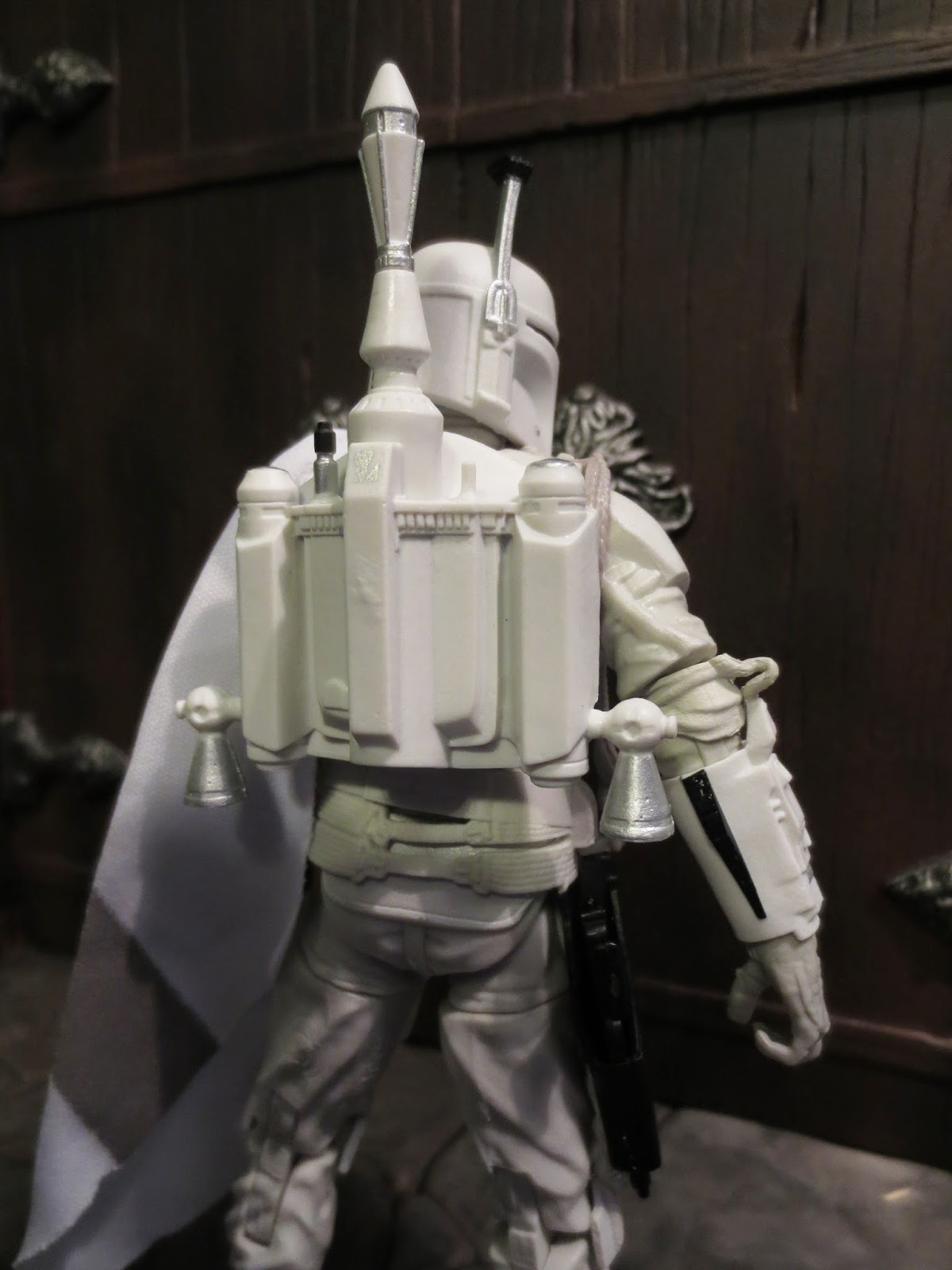 *The accessories really add to the figure, particularly the Sacros K-11 blaster stowed in the holster on Fett's right hip. The jetpack looks great and stays on nice and tight. Fett is one of the better equipped figures in the line which is a real plus.

*While Boba Fett's film armor appeared to be heavily dented and scarred, the prototype armor looks to be clean and new. Unfortunately, since this is just a simple repaint of the previously released Empire Strikes Back Boba Fett, Hasbro didn't go the extra mile. Maybe some new parts could have been created that would eventually be used for a Jango Fett figure down the road? Anyways, not a major issue, but this figure doesn't capture the shiny, sterile look of the concept armor that we've seen. 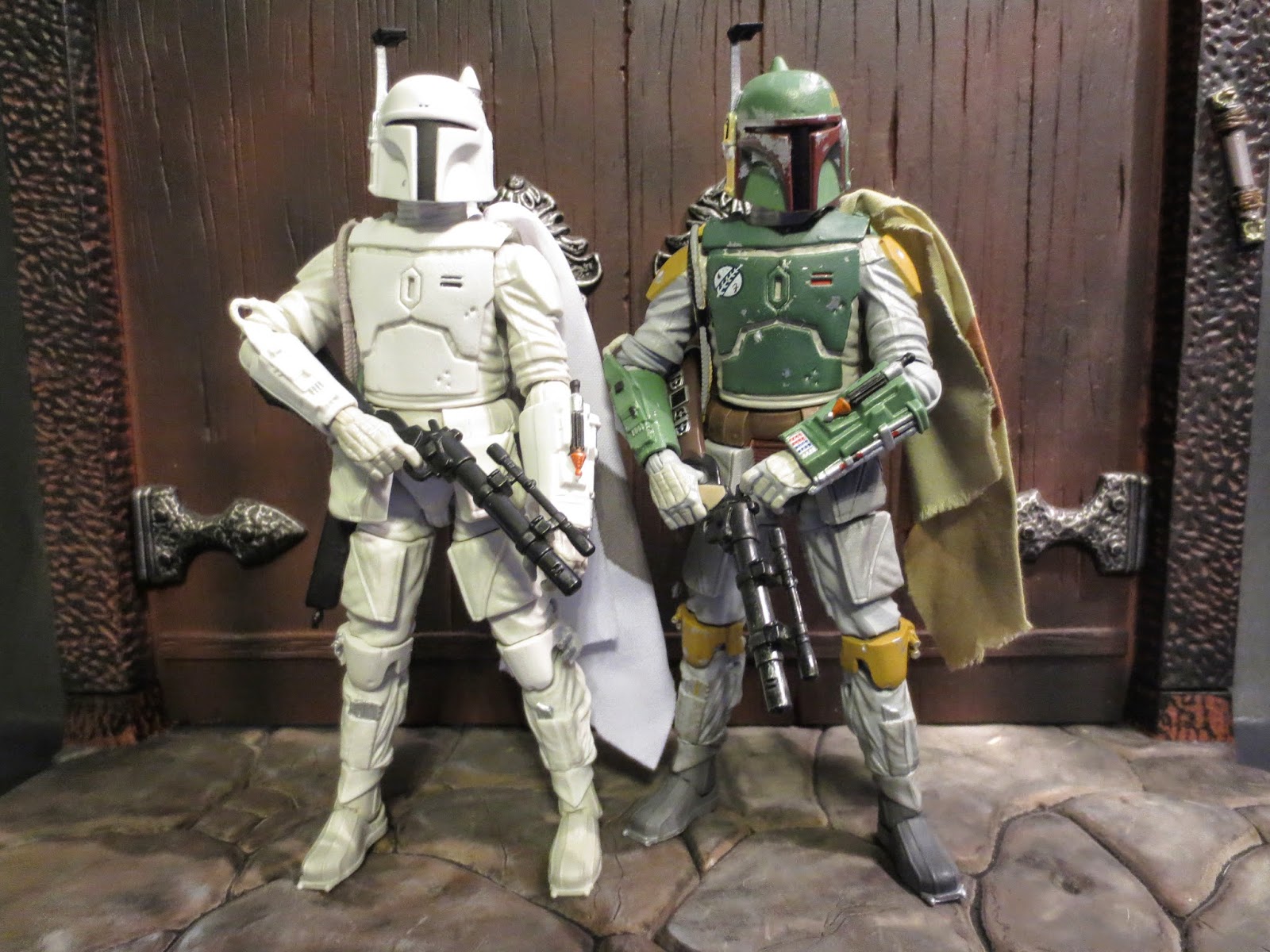 *Rather than create a new weapon for the figure that accurately matched the prototype armor images that have been shown, Hasbro simply reused the EE-3 carbine rifle again. Since this figure is really just a repaint, a new accessory really would have been nice. 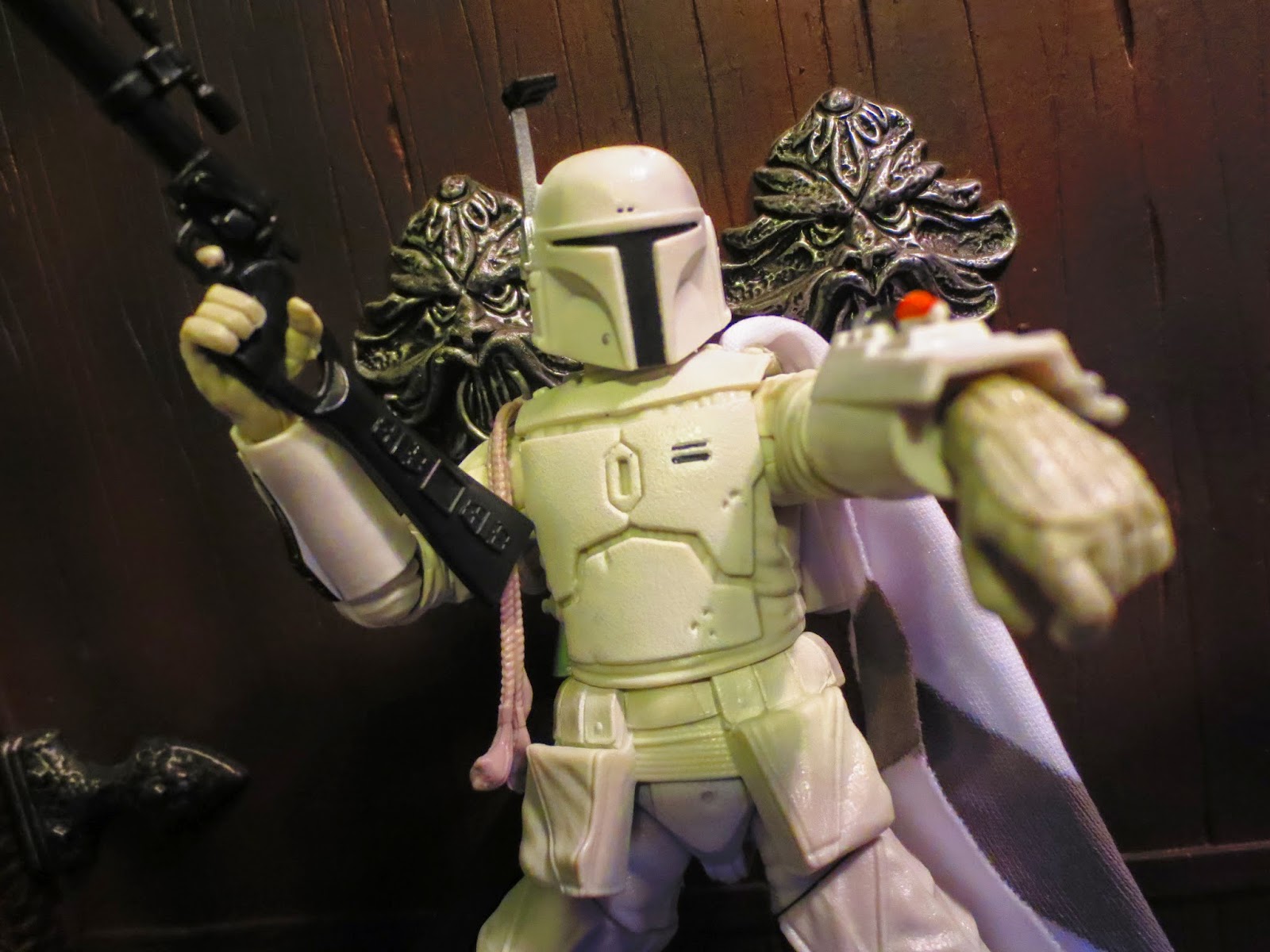 I really like this figure. It's unique, eye-catching, and makes for a great exclusive release. While I wish Hasbro would have added a new helmet or a new gun to give the figure a bit more value, I can't say I'm disappointed by it. This is a straight up repaint, but a rather good one. I'm content giving this figure a Great rating. He's definitely one of the better Black Series figures released and an incredibly fun toy. Now, let's hope Hasbro gets us a Return of the Jedi Boba Fett and a Jango Fett as soon as possible! I'll buy them all!
Posted by Barbecue17 at 12/10/2014