Unite the League: Rookie from DC Comics Multiverse by Mattel 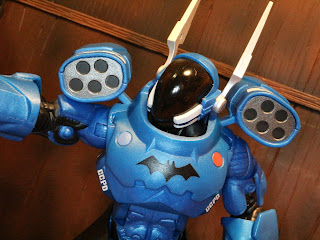 The most recent series of DC Comics Multiverse figures only requires five figures to complete the Collect & Connect figure: The Rookie. Well, the Rookie is what the packaging calls the figure, anyways. This is the GCPD Batsuit/ Batbot from Scott Snyder and Greg Capullo's run on Batman during the New 52. There are plenty of positive things to say about that series, one of them being that there was no shortage of unique ideas. Having James Gordon fill in as Batman during Bruce Wayne's absence was a pretty interesting concept and really helped to further the story while highlighting what makes Batman so unique. Anyways, while Mattel seems ready to move forward with lots of Rebirth themed action figures the release of the Rookie seems to be kind of a last hurrah for Mattel's involvement with the New 52. They started doing some New 52 stuff early on, largely ditched the 6 inch scale, and then for most of it, and only jumped back in just prior to Rebirth with a few Batman related releases. They released the GCPD Batman/ Gordon that goes along with this release in the King Shark series, which now seems kind of off. Why not release these two in the same series? This series is a pretty Bat-centric series (out of the figure figures, two are Bat-family members, one's a Batman villain, and one is Batman himself) so the inclusion makes sense here, too. Let's check this big guy out after the break... 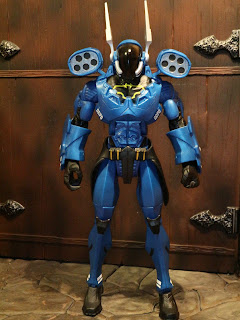 Figures Needed to Complete the Rookie: The Atom, Batman (Rebirth), Batwing, Duke Thomas, and the Reaper.

DC Collectibles released their own version of the Rookie/ GCPD Bat-bot last year as part of a two-pack with the Jim Gordon Batman. It's a nice looking figure but the articulation was definitely below average. Mattel's release is a little shorter but it's also a bit bulkier and includes the Rookie's pistol which DC Collectibles didn't include. Honestly, I find myself preferring Mattel's version better. 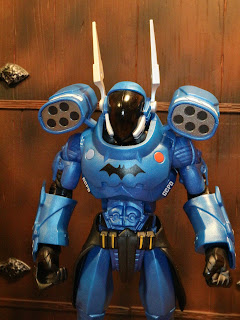 *  Mattel did an impressive job of capturing the look of the Rookie. It’s a somewhat bulky and tough looking mech that nicely shows off the design aesthetic of being both a law enforcement tool and a Batman inspired device. Looking at this, you can really believe that an action figure could conceivably fit inside of it due to the proportions. It's a decent sized build-a-figure and the fact that you only need to purchase five figures to build it is a real plus. 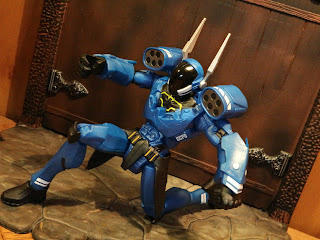 * The articulation is surprisingly good. While it's only as articulated as your average Mattel Multiverse figure, the articulation works well for a mechanized bot like the Rookie. He can take quite a few poses and feels very sturdy and well made. While he may have fewer joints, he definitely seems much more poseable than the DC Collectibles version due to having actual hip motion. 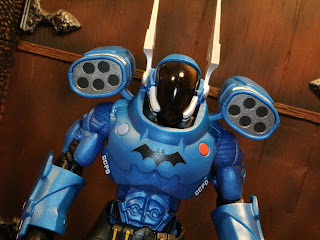 * The upper body looks great! I love the large weapons launchers on the shoulders, the glossy black visor, and the Bat logo across the chest. I also like the white "GCPD" markings on the chest. 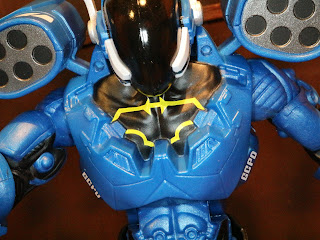 * The chestplate is removable so you can see the chest of Gordon in his GCPD Batsuit underneath. It's a cool feature that becomes useful if you have the Gordon Batman from Mattel. More on that in a moment, though. 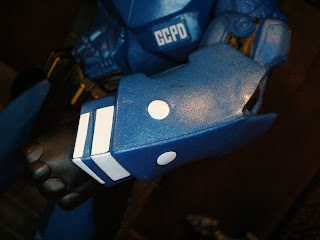 * The arms feature these bulky gauntlets that look both menacing and very, very cool. I like the size and the white paint applications over the metallic blue body. 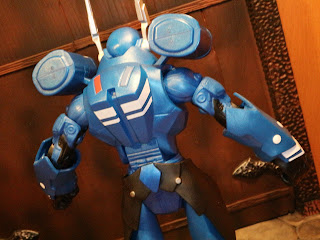 * On the back you can see what might be a huge power pack for the Bat-bot as well as some painted on red and blue lights. * The Collect & Connect Rookie comes with a pistol that fits it's massive hands. It's a cool looking weapon that the Rookie can hold easily. It's a cool accessory. 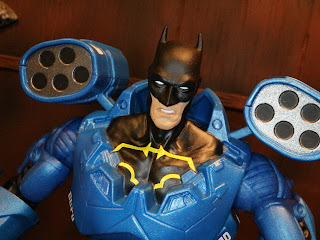 * The Rookie's head is removable allowing you to place on the head of the Jim Gordan Batman figure if you own it. Again, this alternate head does not come with any of the figures in the series but was one of the two interchangeable heads included with the Gordan Batman from the King Shark wave. Still a cool feature, though. 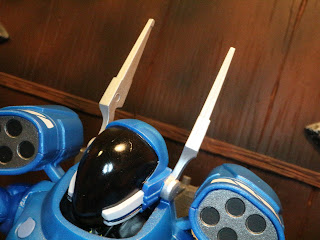 * The bunny ears on the Rookie's head came out of the package a bit bent. They're a little rubbery which is good because it keeps them from breaking but they still look just a tad off. 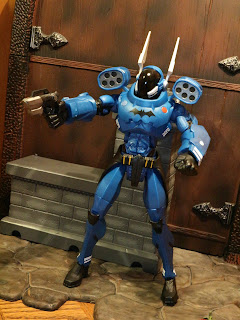 I'm really, really pleased with Mattel's version of the Rookie. This is a fun figure with a great sculpt, some nice paint applications, and a lot of playability. It's a fun toy that fits in nicely with Mattel's Multiverse offerings. While it certainly wasn't one of my most requested figures from Mattel, it turned out great. This is a Great and a 1/2 figure and quite possibly worth picking up the set of five figures for, particularly for Batman fans. Overall, it's easily the best figure in this series. If I had to rank them from best to worst, I'd go:
Rookie > The Reaper > Duke Thomas > Batman > The Atom> Batwing