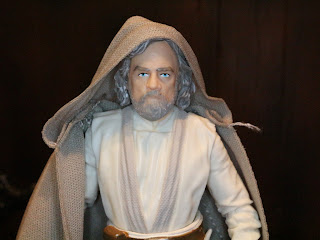 It's time for another pickup from Force Friday II: Luke Skywalker (Jedi Master)! Yes indeed, it inexplicably took Hasbro nearly two years to release a figure of Luke Skywalker based on his appearance in The Force Awakens. I know Luke only had a brief appearance in the film, but how the heck did Hasbro not get this ready sooner? According to Hasbro sources, they didn't get to see Luke in his Jedi Master robes until the film hit theaters. What gives? It seems like Disney is so intent on keeping Star Wars stuff "secret" that it's even affecting their relationships with their licensees. I really hope Hasbro and Disney work something out as it would suck to have to keep waiting upwards of two years to receive action figures of prominent characters revealed in each film. Luke is supposed to play a much larger role in The Last Jedi, so his inclusion here certainly makes sense. I doubt that there was any action figure from a sequel trilogy character more anticipated than Luke Skywalker, so it's kind of cool that it's finally here. How does it fare, though? Find out after the break... 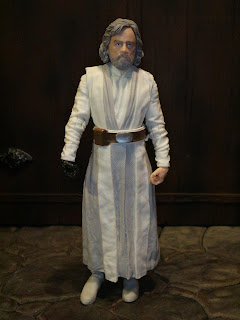 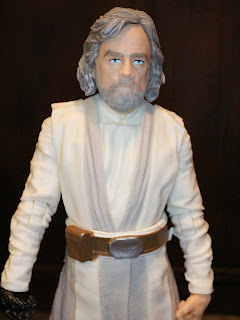 * First of all, a big positive is that we finally have an official action figure of Jedi Master Luke Skywalker! That's pretty exciting in and of itself. It's also welcome that this is a pretty good looking figure. Luke's outfit is fairly simple with a mixture of off-white and grayish-tan robes and a simple brown belt, but it's cool. There's something almost jarring with seeing Luke wearing an outfit that seems so much more at home in the Prequels.

*There are actually a lot of different textures on this figure. While the off-white segments are smooth and flat, the grayish-tan parts have a more textured design. Heck, the leather belt even looks pretty solid for such a simple piece. 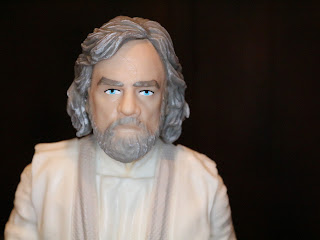 * In person, this is an incredible sculpt. I'm not used to seeing Mark Hamill looking like this but Hasbro captured the haunted look of the character perfectly. The paintwork is quite neat and clean, Luke's blue eyes are piercing, and the hair is excellent detailed. 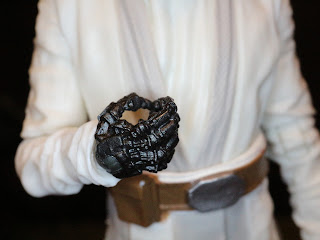 * I love Luke's mechanical right hand. The sculpt is very cool. I cannot wait to see this thing in action more in the film. 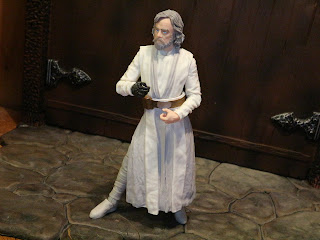 * Luke's articulation is a bit bland. It's not terrible, but the plastic robes do inhibit leg motion a bit. Unless he actually had cloth robes I'm not sure what else I should have expected, though. He still feels sturdy and well made and I can't help but pick him up. I'm honestly resisting giving him a lightsaber until we see what he wields in The Last Jedi. We'll see how long I can hold out. 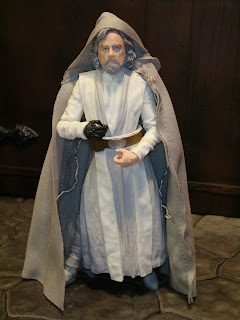 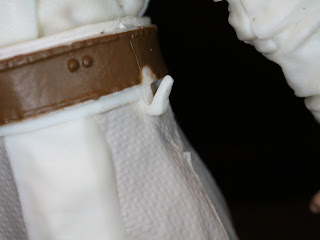 * On the left side of his belt Luke is sporting this little slip. I assume it's to hold a lightsaber but A. Luke doesn't come with one and B. It looks pretty flimsy. I really wish Luke had come with anything. A staff, cane, anything, really. 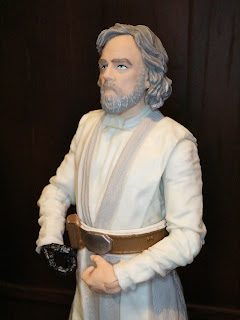 Luke Skywalker (Jedi Master) is a nice looking figure that I guarantee every Star Wars fan alive probably wants, but unfortunately he's kind of dull. I don't know, maybe it's because the robe isn't as dynamic as it should be or because he's lacking a lightsaber or cane of some sort. I don't regret this figure at all, because c'mon: It's a new variant of Luke Skywalker. I just wish that he had some little extra that made him a bit more exciting. My speculation is that he'll have some cool lightsaber or staff revealed during The Last Jedi, and then Hasbro can sell us the figure again. What do you think?