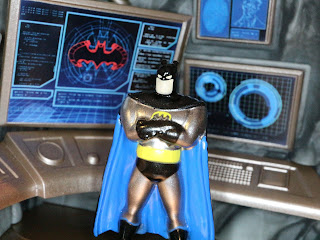 I've got friends in town this weekend, plus I've been going crazy picking up The Last Jedi merchandise, so today is a short one: It's the DC7 Batman from Jada Toys' DC Nano Metalfigs. DC Nano Metalfigs thus far has features a variety of comic characters from different eras as well as DCEU characters from BvS and Suicide Squad. They look to have a 1966 Batman on the way as well, so it's a fairly robust line, and now you can add Batman: The Animated Series to the list. This Batman is based on the classic B:TAS model and makes a nifty little collectible for under a dollar. More words and pictures after the break... 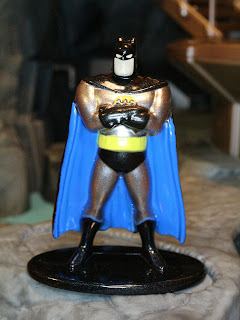 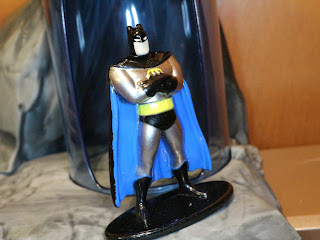 * From the front this is a great sculpt of Batman. It's pretty simple, but the style of the animated series was fairly simple, too. This is a very traditional looking Batsuit with the yellow utility belt and the yellow oval around the bat logo (although most of it is covered by Batman's arms). By the way, I really like the cross armed pose. It's quite different than what we usually see. From the side the figure looks a bit too thin, but my guess is you're displaying him facing forward anyways. 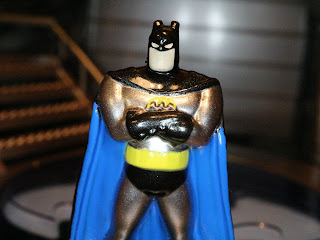 Like any other DC based line, DC Nano Metalfigs features plenty of Batman variants. This one is one of the best, though, and really offers up a cool tribute to one of the greatest cartoons of the 1990s (if not all time). The sculpt is easily recognizable in this small scale while the paintwork looks quite clean. I love the presence of the blue cape interior, as it adds another splash of color to make this figure stand out. This is a Good and a 1/2 minifigure and a worthy addition to the DC Nano Metalfigs line.

If you're looking for more Batman reviews, check out the Dark Knight Gallery for dozens of them!

If you're looking for more DC Nano Metalfigs reviews, here's a bunch for you to browse: