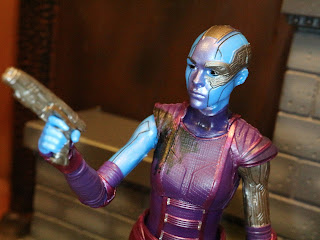 It's time for another Marvel Legends review from their Guardians of the Galaxy Vol. 2 series and this time it's a kind-of-villain: Nebula! Nebula and Ronan the Accuser were the two characters from the first film that I cannot believe Hasbro didn't produce (let's be honest: Hasbro seemed to have an aversion to making Marvel Cinematic Universe villains for a few years) so I'm glad that Nebula received a figure for the second film. Not only is Nebula a very cool and very inspired looking character but she's also played by the incredible Karen Gillan. Nebula is another one of those Marvel Legends that just shows how good of a job Hasbro's Marvel Legends team is really doing. Let's take a closer look at this very slick figure after the break... 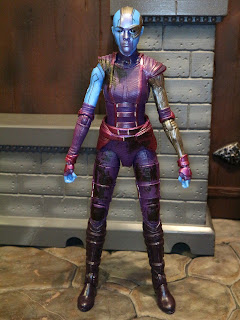 Accessories: Pistol, alternate left forearm, and the left leg of the Manits Build-a-Figure. 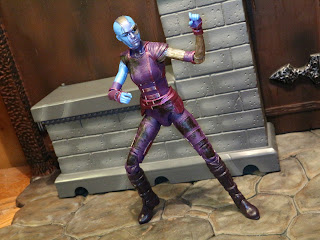 * Nebula is another example of the near perfect articulation scheme Hasbro has going on in this line. She's also a completely unique sculpt, so it's extra cool that everything works perfectly. Nebula is a solid, durable toy that you will have a blast posing over and over. 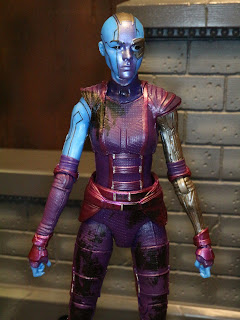 * Nebula looks like the walked right off of the screen. If I had to pick one mass market action figure this year to show off the most impressive combination of sculpt and paintwork, Nebula would probably be it. The mixture of beautiful metallic paint tones over an incredibly impressive sculpt makes Nebula a highlight of the year. For $20 dollars, this is about as good as you can get. 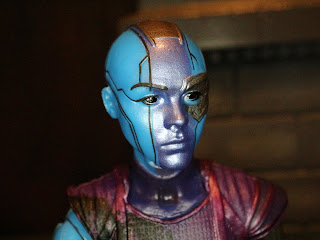 * This headsculpt is impressive. This isn't just Nebula; this is Karen Gillan as Nebula underneath some heavy makeup. You can see how many different paint applications there are alongside of plenty of augmented cyborg bits, but you can see the likeness of Karen Gillan. It's a gorgeous sculpt that truly captures her likeness. 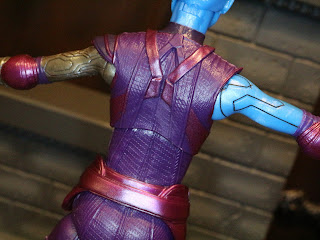 * Here's a close-up of Nebula's back so you can see the variety of textures and details on her body. Her main bodysuit has some cool texture details while her left arm looks cybernetic (with plenty of mechanical detail) and her right arm features some fine black lines running up and down the length of the limb. 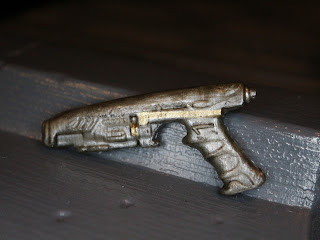 * Nebula is a incredibly skilled hand to hand fighter but that doesn't mean she also doesn't like to use a pistol every now and then. This blaster is a cool looking, small accessory for the figure that features a few extra paint applications (the gold edging along the trigger). 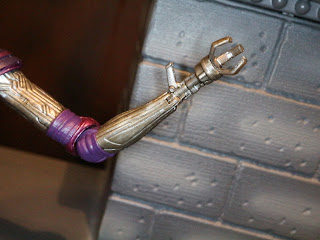 * Nebula also includes an interchangeable left arm. Her forearm disconnects at the left elbow easily and they both swap back and forth like a breeze. 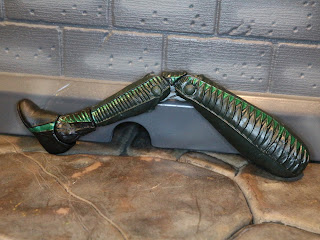 * I'm not sure that I'm going to build Mantis yet but I'm always happy when a series of figures include a Build-a-Figure. If I build Mantis, you know I'll review her. 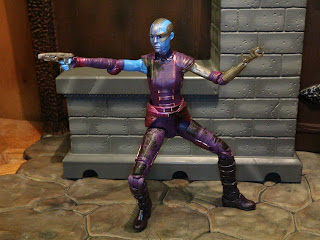 The Marvel Legends: Guardians of the Galaxy Vol. 2 series just keeps getting better and better. Hasbro has done an incredible job with these figures. I will dare say that Nebula has a better sculpt and more elaborate paintwork than most other figures that cost 2, 3, and even 4 times as much as her. She's one of the best action figures I've reviewed this year and her presence on my end of the year lists for best figures is a shoe-in. Confirmed Epic with a capital E! This is the best action figure of a bald, blue Karen Gillan you could hope for!


I haven't reviewed any other Nebula toys! I have reviewed plenty of other Guardians of the Galaxy based Marvel Legends figures, though, including: