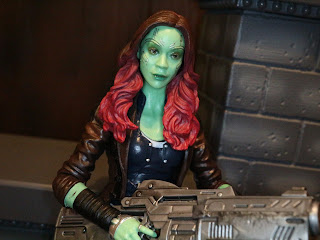 While I'm am absolutely many, many, many times a DC fan more than a Marvel fan, I know it's no contest as to who has the best ongoing action figure line: It's Marvel Legends, hands down. With every new series of figures Hasbro just seems to keep improving the Legends line. The sculpts and likenesses get better, the accessories seem to actually be improving and becoming more numerous, and the character selection keeps going deeper. Despite how awesome they are I don't actually collect that many Marvel figures but I do make an exception for the Guardians of the Galaxy. I've been looking for the series 2 figures for months and I finally found them last month. First up in a trifecta of GOTG reviews is Gamora. Let's take a closer look at this incredible rendition of the Most Dangerous Woman in the Universe after the break... 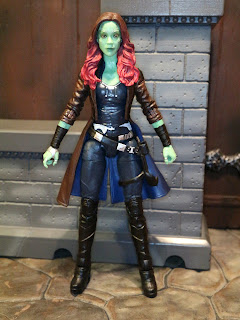 Accessories: Rifle, sword, folded up-sword, and the right leg of the Mantis Build-a-Figure. 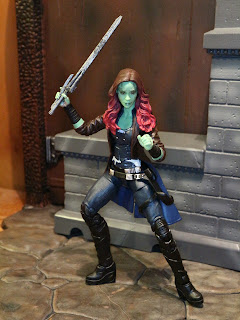 * I can't think of a single Marvel Legends figure from the past few years that has had less than stellar articulation and Gamora certainly doesn't break that trend. The range of motion and quality of her joints is impressive. These are really fun figures, no doubt about it. 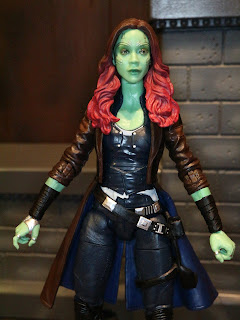 * Gamora's outfit is very cool. She's wearing a blue jumpsuit with a knee length leather coat. It's a great outfit and it's expertly sculpted and painted. While the sleeves of the coat are sculpted as part of Gamora's arms, the body of the coat is a separate piece that adds more depth to the figure's appearance. 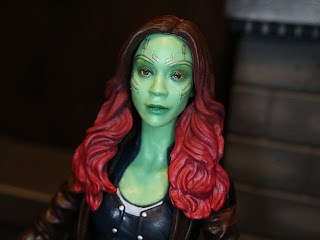 * This headsculpt is amazing. This doesn't just look like Gamora or like someone cosplaying Gamoral; it absolutely captures Zoe Saldana as the character. The portrait is beautiful and captures a very lifelike expression. The hair is perfect, too. 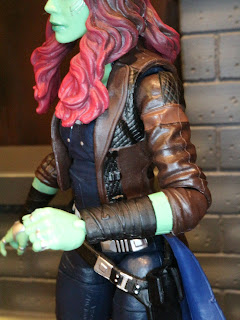 * Here's a shot capturing a few of the finer details on Gamora's outfit including the textured bits of her jacket, her wrist wraps, and the various rings on her fingers. 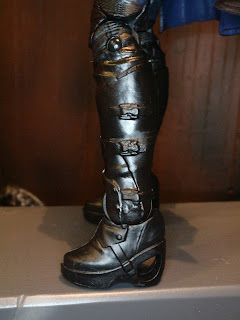 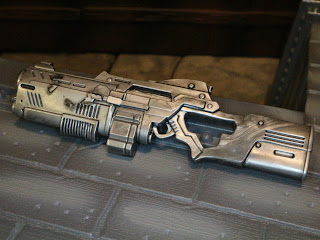 * Gamora comes with one of the coolest rifles I've seen in quite some time. Not only is this very impressively sculpted but it also has a subtle but killer paintjob. 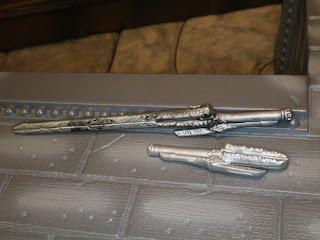 * Need Gamora to get up close an personal? She comes with her cool sword. Oh, and she also comes with a smaller, folded up version of her sword. The paintjob on the folded up sword isn't as cool as the normal version, but it's still a neat extra. 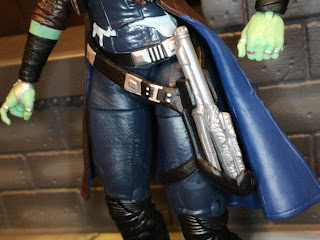 * There's even a sheathe on Gamora's belt to hold the folded up sword. It plugs right in and stays in fairly well. 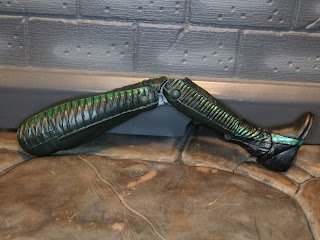 * The second series of Guardians of the Galaxy Vol. 2 figures features the Build-a-Figure of Mantis from the film. While I'm not yet sure I'll be building the figure (there are a few figures in this series I really am not interested in) I doubt I'll have any problem selling the parts off if I need to. I still am always happy to have a Build-a-Figure included. 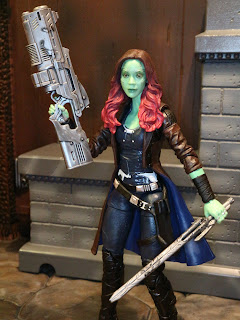 Hasbro has delivered yet another Marvel Legends figure that has knocked it out of the park. They're on a roll, folks, and I really wish other companies working in this scale and style would pay attention to what they're doing. Whether the success of Marvel Legends can be attributed to the long history of the brand going back to the Toy Biz days, the current dominance of Marvel Studios, the great Marvel Comics source material, Hasbro's excellent work on the line, or a mixture of the above, there is no doubt that they're putting out figures that quite possibly rival the releases of companies asking three and four times as much per figure. Gamora here is an Epic release and easily worth the $20 bucks you might pay if you manage to track her down.

If you're eager to check out more Gamora reviews, I've also looked at the smaller scale Star-Lord and Gamora from the 2014 movie toyline and the comic inspired Gamora from the Guardians of the Galaxy boxed set.

If you're looking for more Marvel Legends: Guardians of the Galaxy figures, check out the following: