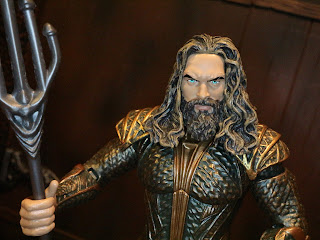 Of the six main members of the Justice League that appear to be showcased in the upcoming film, Aquaman is the one whose appearance varies the most from his comic counterpart. While we've definitely seen Aquaman depicted with a giant beard and longer hair, Jason Momoa's portrayal of the character definitely looks different. That's not a bad thing, though; I'm pretty pumped to see Aqaman make a real on-screen debut (you know, besides his cameo in BvS). Aquaman is part of the first series of DC Comics Multiverse figures based on Justice League so he includes the expected Collect & Connect piece for Steppenwolf. Let's take a closer look at Aquaman after the break... 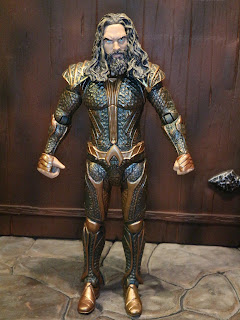 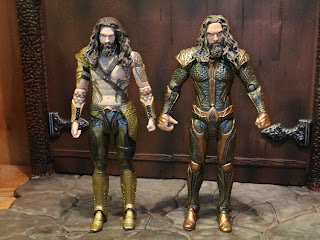 * While they don't share any parts (other than the trident), I did want to show off a comparison between the BvS Aquaman (on the left) and the Justice League Aquaman (on the right). As you can see, not only are the outfits completely different but so are the headsculpts. It's nice to see how much effort Mattel put into this figure. 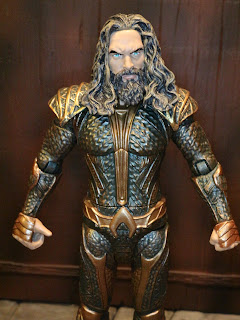 * Starting with the Wonder Woman series of figures I think Mattel has really been improving the headsculpts and detail work on their Multiverse figures. Not all of them, but you can definitely see some more impressive figures in this line. Aquaman is one of them. His armored look is incredible. Mattel really captured this outfit (from what I can tell, anyway) and did an excellent job into making it look impressive. 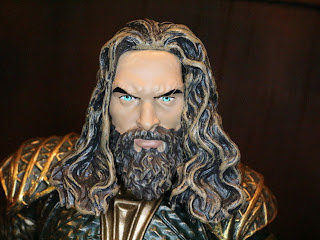 * This headsculpt is pretty sweet, too. Check out those eyes and the detail work on the beard. Mattel absolutely nailed Jason Momoa's portrayal of Aquaman here. This is probably the best headsculpt in this series, hands down. 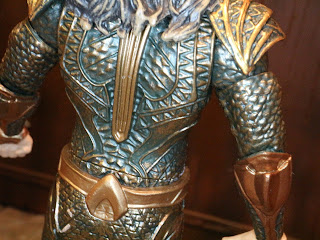 * Here's a closer look at the paint and sculpting detail on Aquaman's armor. I like the mixture of gold and green here. It's certainly scale like and definitely seems fitting for Atlantean royalty. 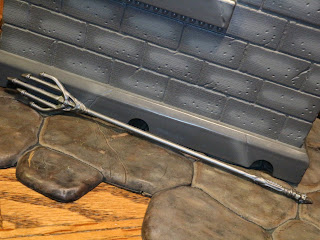 * Aquaman does come with the same trident that the first figure came with only now it's molded in a silver colored plastic rather than gold. It looks a bit better this way. It's still not the most impressive accessory, but I'll take it. 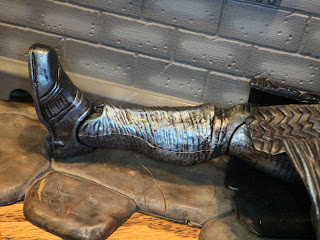 * Each figure in this six figure series includes a piece of the Collect & Connect figure Steppenwolf. Steppenwolf's right leg comes with Aquaman. I'm still in the process of building mine, so I'll review it once it is complete, but for now I'll just say that I always appreciate when a Collect & Connect piece is included. 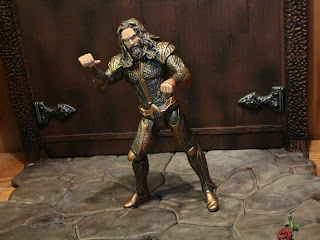 * Unfortunately, Aquaman's articulation is pretty weak. The movie and TV based Multiverse figures don't always have the best articulation but I'm feeling like Aquaman's is a bit weaker and more restrictive. The elbow and hip joints just don't offer up much motion, meaning the poses this guy can take are pretty static. 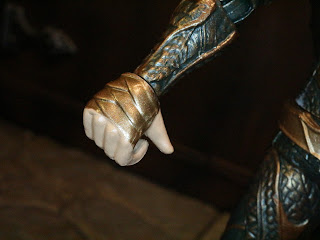 * Quality control alert! My Aquaman's right hand is very loose. It actually kind of spins around in the socket. I was actually afraid it was going to fall off when I first took him out of the package and put the trident in there. 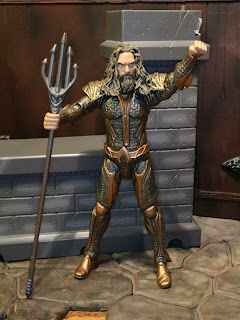 Aquaman is an impressive looking figure with some very, very weak articulation. Mattel has shown some great strides in creating better head and body sculpts but they still seem to be very inconsistent in their articulation schemes. Factor in the problematic right hand my Aquaman has and this guy definitely takes a hit. He's a Good figure, but some improved articulation and a better accessory would have made him something truly special. He's one of the better figures in the Justice League line so far but that may not be saying much; thus far this line hasn't been terribly impressive. Let's hope the movie is much, much better!