Road to the Last Jedi: Aayla Secura #217 from POP! Star Wars by Funko 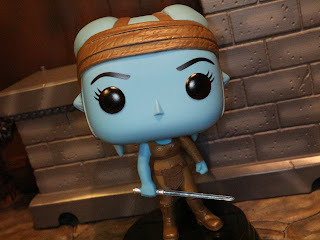 The latest Smuggler's Bounty crate just arrived and this month it included two POP! vinyls. This month's theme is "Jedi" and it includes two Jedi Masters: Obi-Wan Kenobi and Aayla Secura. I'm going to review Aayla Secura first because I have a somewhat interesting (but not really) Aayla Secura story. About 6 or 7 years ago my wife and I were very active in fostering dogs. Most of the dogs came from shelters and rarely had a real name. One time we fostered a beautiful German Shepard who came to us wearing a teal blue color that reminded me of the color of Aayla Secura's skin, so we decided to call her Aayla! I know that has nothing to do with the character at all, but I figured you might like that little nugget of joy for your day. Otherwise, I'd just be telling you that Aayla Secura is a Twi'lek Jedi Master from Ryloth who was murdered on Felucia after the issuance of Order 66. That's kind of a bummer, isn't it? Wasn't my story cheerier? Let's take a look at this super cool Star Wars POP vinyl after the break and try to raise our spirits... 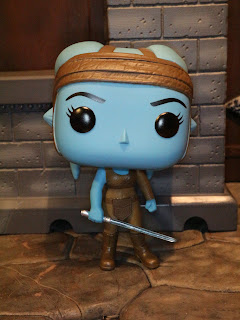 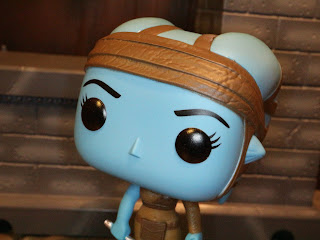 
* Aayla Sscura's face is quite nice. I now it looks like the rest of the POPs, but they light blue skin tone is very nicely done. Furthermore, the leather pattern on her head and lekku wraps is pretty impressive. 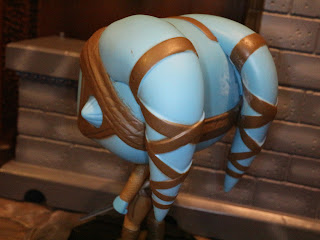 * Aayla's lekku look great as well. They're covered by strips of leather cord that wrap around the side of her head. 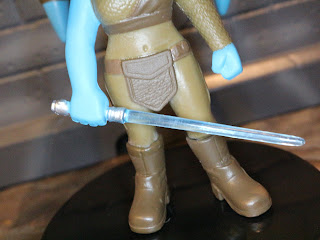 * While it isn't a removable accessory, Aayla Secura is wielding her lightsaber. The blade is molded from a translucent blue plastic and has a nice, realistic quality to it. You know, for as realistic as a fictional toy lightsaber can look. 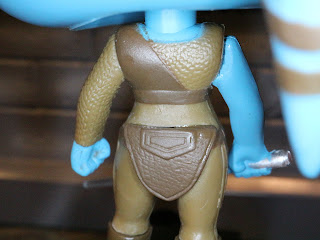 * Aayla's outfit is made from various types of material and Funko gave these different pieces differing textures as well. 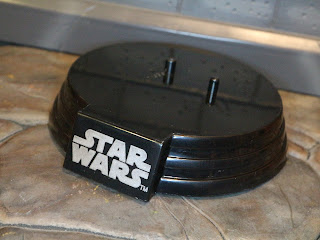 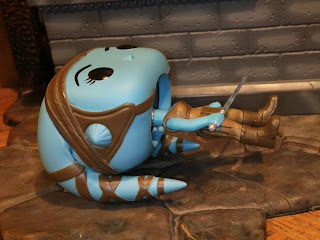 * Maybe there isn't much that could have been done but, like Hera Syndulla, Aayla Secura doesn't stand up well on her own. If you keep her on her stand she should be just fine but you might want to be aware of this if you plan to display her not on her stand. 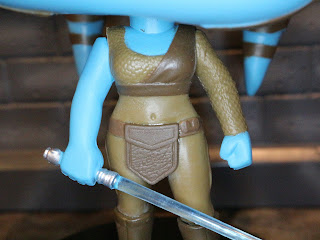 * As I was photographing Aayla I immediately noticed something very wrong with the figure's paintwork: Aayla's stomach is not painted blue! Aayla Secura usually sports a outfit that shows off her midriff, but Funko neglected to paint it the proper blue. Instead, it's left the same color of brown as her pants. Whether this is an oversight or a quality control issue, it's kind of annoying. 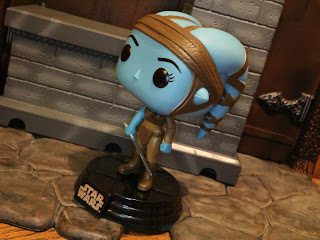 I expected Aayla Secura to be one of my favorite Star Wars POPs, but I'm a bit disappointed by the missing paint application on her stomach. The heaviness of her Lekku seems unavoidable and since she can stand using her display base, I'm a bit more forgiving there. Aayla is a Good figure, but she should have been checked over once or twice to make sure nothing was missing. Star Wars fans notice stuff like this!

I haven't reviewed any other Aayla Secura figures. I have reviewed plenty of other POP! Star Wars figures, though, including: