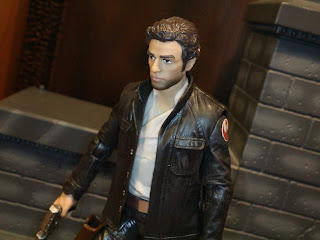 What makes a Star Wars costume iconic? That's tough to say. It's easy to point to incredibly well designed costumes like Darth Vader and Boba Fett and point out how incredible they are, but why is there so much love for a simpler outfit. Say, something like Han Solo's simple outfit with a dark jacket from The Empire Strikes Back? It's tough to quantify, really. Today I'm looking at the new Black Series Captain Poe Dameron figure from Hasbro and I'm still trying to decide what I think of Poe's new outfit. If you remember from Episode VII that Finn took Poe's jacket after he thought Poe was killed in the crash on Jakku, then you know that Poe just had to find something new to wear. Plus, new costumes sell more toys, right? Poe has a very simple, very basic outfit here, but there's something very classic about it too. Let's check this new Black Series release out after the break... 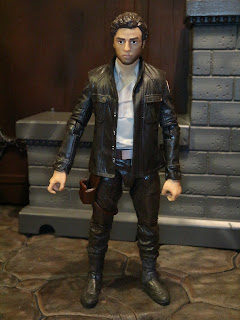 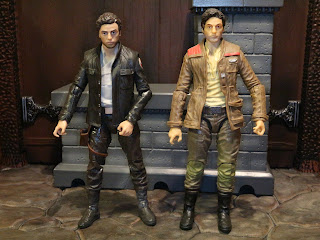 * Here's a a quick comparison of the new The Last Jedi version of Poe (left) with the Episode VII version (right). As you can see, both figures are completely different with no shared parts. Oddly enough, the The Force Awakens version of Poe is a bit taller. 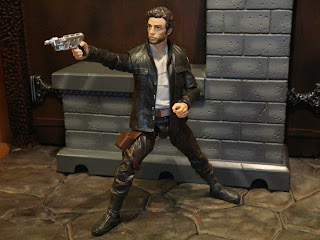 * I really think Hasbro has improved the articulation on these figures. The articulation scheme is the same but the range and quality of the joints is so much better. Once you give him his blaster, Poe is a really fun figure to pose and play around with. 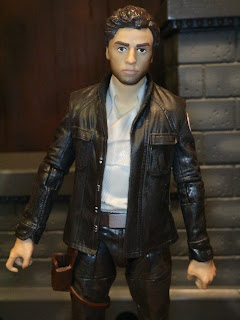 * I've seen quite a few comments from collectors who initially thought Poe was wearing Han Solo's Episode VII outfit. That's not true, although they do have a very similar sense of style due to the brown pants and brown leather jacket. Poe's shirt also looks very Han Solo-ish. It kind of reminds me of his shirt after being released from Carbonite in Return of the Jedi. 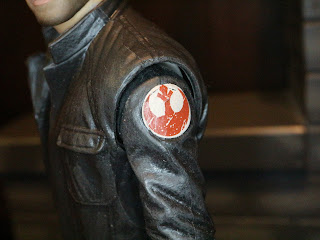 * On the left shoulder of Poe's jacket you can spot this really cool Resistance symbol. I love the weathering effect on both the patch and on Poe's jacket. 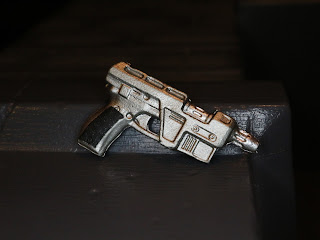 * Poe's Glie-44 blaster pistol is much improved from the model included with the Episode VII single packed pilot Poe. The sculpt and paintwork on this piece is quite impressive. 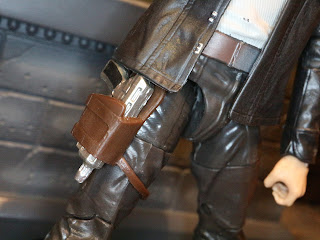 * To store his pistol you can make use of Poe's holster. The belt is a separate piece and it is flexible, allowing you to pose the figure without  the holster interfering. 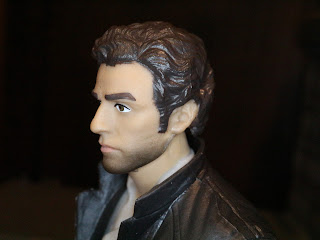 * I'm torn on this sculpt. Poe's headsculpts have only ranged from decent to unrecognizable, so almost anything should be an improvement. From the side, particularly the hair and face, look very much like Oscar Isaac. 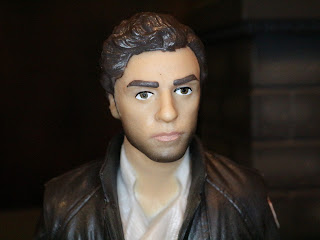 * Head on, however, I think Poe just looks too young. The shape of the face ceases to look like Oscar Isaac to me. 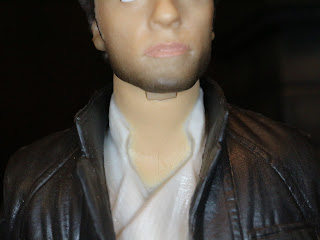 * One of my pet peeves with this line is whenever I can see the hinged neck peeking out from underneath the figure's head. Poe suffers from that unfortunate condition here, unfortunately. 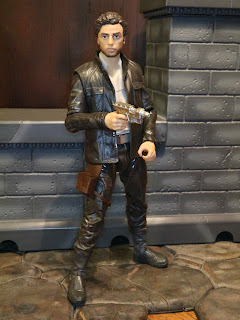 While he's not one of the most exciting figures released in the most recent Black Series offerings, Poe Dameron isn't by any means a bad figure. He just feels kind of subdued compared to other releases, maybe due to the limited accessories, somewhat off headsculpt, and a somewhat less "fresh" feeling outfit.  This is a Good and a 1/2 figure with plenty of good points, but it's not going to ignite a fire under everyone to get out and snap him up.


If you're looking for more Black Series figures, check out the following: