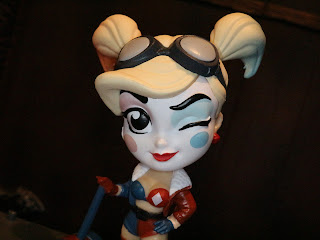 Did yesterday's review of Batwoman leave you wondering the identity of the second figure I pulled from series 1.5 of Cryptozoic's DC Comics Lil Bombshells toyline? It was Harley Quinn! How crazy that I pulled my two favorite characters from the series, huh? I was pretty pumped about that. Like with Batgirl, this Harley is the same sculpt as the series 1 version with a different paintjob. While the first Harley Quinn's paintjob captures the look of the Bombshells statue, this one has a paintjob that is reminiscent of Harley's modern comic outfits. Let's take a short look at this minifigure after the break... 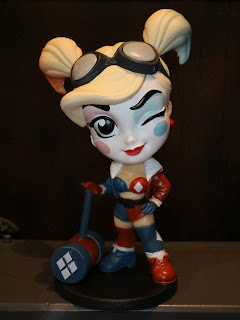 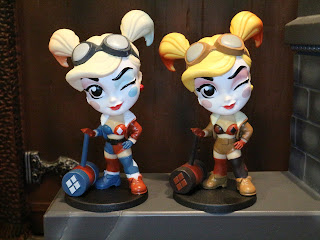 Here's a look at both figures (series 1.5 on the left and series 1 on the right). As you can see, the series 1.5 version has lighter hair and an alternating red and blue paint scheme. I like the more vivid colors and the red and blue dyed tips and makeup. I think I still like the series 1 version better, but this one definitely adds something fun and unique that is legitimately based on a recognizable character variant. 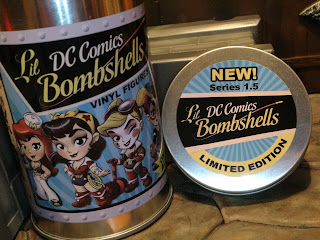 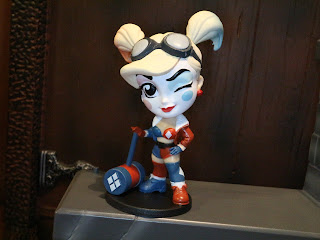 I really think this Harley is just as good as the series 1 version. She's noticeably different and not just a palette swap from series 1; the red and blue alternating scheme really does resemble the design of her outfit from the New 52 that has influenced so many Harley looks since. While the price on these definitely seems a bit high, they really are some of the nicest minifigures out there. Harley is a Great miniature Bombshell figure and well worth tracking down. I'll be reviewing all of series 2 soon and guess what? We get yet another Harley variant there!

If you're looking for more Lil Bombshells reviews, check out the following: