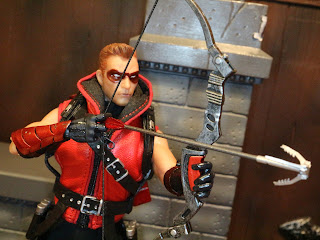 Over the past few years Roy Harper has absolutely become one of my favorite DC characters. While Red Hood and the Outlaws may have started out a bit rough it quickly became one of my favorite books of the New 52 era and was followed up by the excellent Red Hood/Arsenal. Whether you call him Speedy, Red Arrow, Arsenal, or just Roy, Roy Harper has carved himself out a place in the DC Universe. He's not A-list, but he certainly belongs. That's one of the things that makes Roy's inclusion in Mezco's One:12 Collective line; he's definitely the most "wildcard" member of the One:12 Collective heroes right now. Of course, the reason for this is that Arsenal is a slightly elaborate variant of the previously released Green Arrow. Released near the end of last month as a Previews Exclusive, Arsenal uses all of Green Arrow's accessories and most of his body and outfit to deliver a unique character. He also comes packaged in one of those deluxe metal storage tins rather than the standard Mezco 5-panel box. Let's check this guy out and see how he stacks up to the other figures in this series after the break... 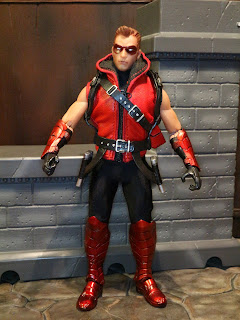 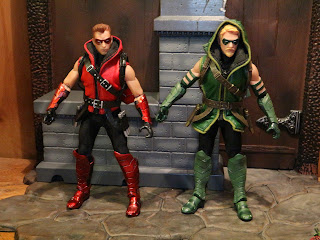 *Here's a look at Arsenal (left) and Green Arrow (right). They're very similar and mostly share the same body and outfit. The tunics are different, but otherwise you really would be fair in saying that Arsenal is a glorified variant of Ollie. Check out my review of the Green Arrow if you want more comparisons or for a fuller look at some of the finer shared details. I did rely heavily on that review when writing this one, just FYI. 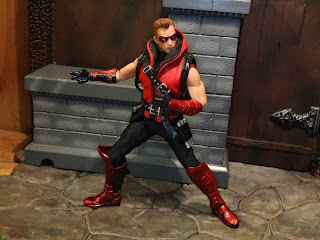 * The articulation on the One:12 Collective line is just fantastic and is, quite possibly, the best and sturdiest 1/12th scale articulation on the market. The joints feel designed and crafted to perfection; you'll really be amazed by how sturdy the figure feels and how easy it is to put it in the poses you want to see. Roy's tunic feels much less bulky than Ollie's tunic, meaning his articulation seems even better. He can also hold a fairly legitimate archery pose, too. 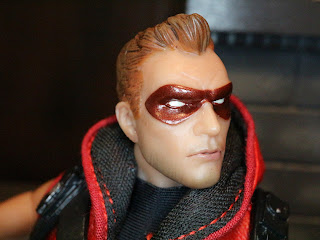 * The biggest difference between Arsenal and Green Arrow (besides the color) is the headsculpt. Arsenal includes an all new headsculpt and it's quite impressive. This version of Roy definitely seems to borrow more from the TV show Arrow and later Post-Crisis depictions of the character rather than anything from the New 52. I gotta admit, I'm a fan of the New 52 Arsenal, but this is still a strong look. The hair is impressive and the metallic looking mask is pretty sweet. 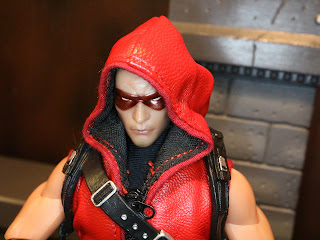 * One of the coolest elements of this figure is the hood. In every picture it seems oversized but, in person, it looks fantastic. The hood is attached to the pleathery tunic (which I'll get to in a minute) and folds up and down neatly thanks to some hidden internal wires. You really can set this hood almost perfectly in a variety of poses, giving you the chance to combine the head and hood articulation for some incredibly expressive poses. I think Arsenal's hood is even more well crafted than Ollie's. 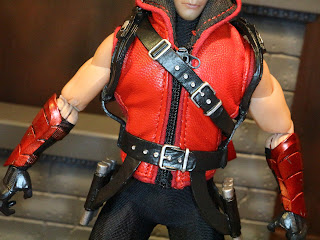 * Here's the tunic I just mentioned. It does have a functional zipper, but it's not really designed to be taken off. Underneath is a black spandex body suit.  I love how this tunic/ hoodie sets over the figure's body, capturing a layered look that plastic just couldn't achieve. Unlike Green Arrow, Roy's tunic/ hoodie ends at the waist rather than draping down. It feels a bit more modern. 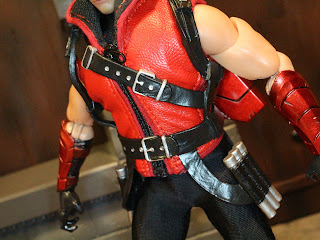 * The harness is not removable and adds to the complexity of Roy's outfit. Rather than a leather-like appearance, this one seems more like it's meant to be crafted from a synthetic material. I'm not quite sure what the round tubes on the sides are for, though. Anyone know? They look kind of cool. Maybe they hold the arrowheads for the more high-tech arrows? 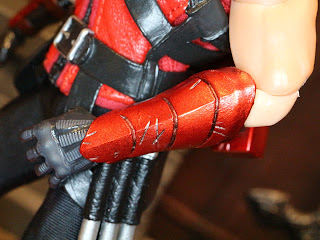 * Roy's wearing standard looking gloves (but no arm wraps) and some more heavy duty forearm guards. The paintwork is really cool on these, particularly the attention paid to all of the little dings and scratches something like this would acquire. They don't swivel like most other arm guards in this line, but I haven't experienced any distress because of that. 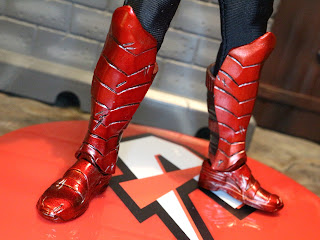 * Roy is also wearing some cool boots with armored greaves strapped over them. They too are sporting the intricate wear and tear that the arm guards show. Oh, and the soles of the boots have a very cool traction pattern. Maybe these are some sort of specially designed sole for parkour and other free running activities? 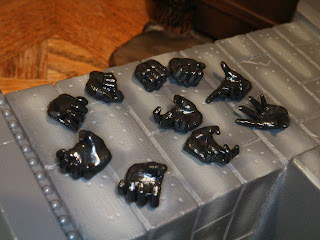 * Arsenal comes with the same 10 hands that Green Arrow included. They switch out easily and feature somewhat rubbery fingers to help aid in holding accessories. You get a set of fists (for punchin'!), a set of grips (for grabbin'!), a set of arrow clasping hands (for arrowin'!), a right hand designed to grip a knife (for stabbin'!), a right hand designed to hold the tip of an arrow when drawing from the quiver (for drawin!, and a pair of arrow releasing hands (for releasin'!). 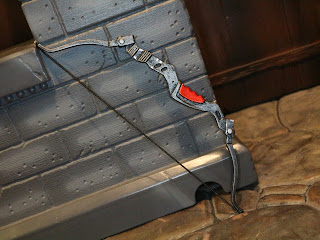 * This is a very modern looking bow which goes well with the Roy's costume. It's nothing insanely fancy but it definitely seems better than what your average street archer might carry. And no, I have no idea what an average street archer is. The bow has a nice paintjob and comes pre-strung with a pretty tight string. The string is much improved from Ollie's and has more flexibility to it! Nice to see that Mezco did improve this figure! 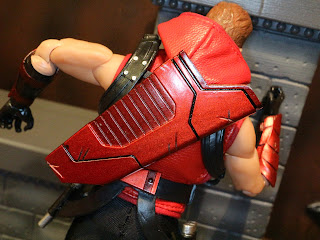 * To carry his arrows around, Arsenal is toting a pretty heavy duty quiver. This looks like a custom piece rather than something "bought off the rack" and it also looks nicely armored. It's also covered in dents and scratches, showing off Roy's numerous brushes with danger. 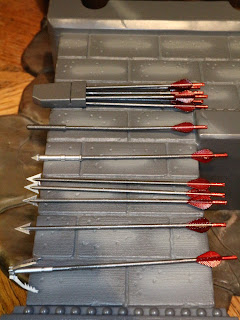 * Arsenal includes the same arrows that Green Arrow comes with: A grappling hook arrow, a single arrow, a set of three arrows together, an explosive arrow, a blunt arrow (on Green Arrow this was painted green to be a Kryptonite arrow), and a set of arrows meant to be tucked into the quiver. 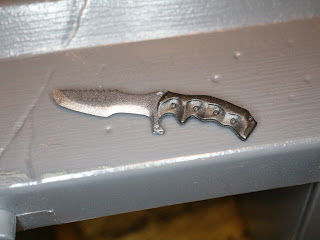 * For when an arrow just won't do, Roy's also packing a combat knife for close quarters. It's got a really nice grip and a serrated edge along the top of the blade for making more random arrows on the fly. 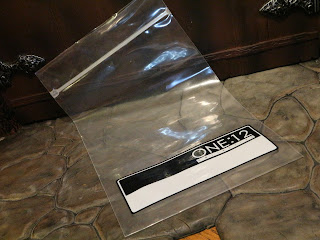 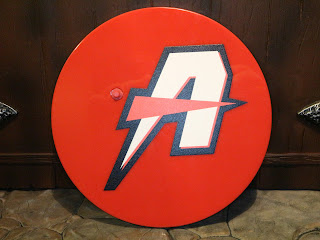 * Like the other One:12 Collective figures,Arsenal features a round display base featuring a logo. The Arsenal "A" is emblazoned on the base and an off-centered peg helps to keep the figure standing nice and secure. 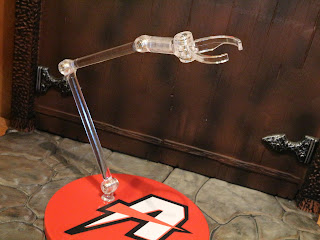 *  There is also an articulated display arm that can be inserted where the peg is (you just have to remove the peg). You can get some great, secure poses here as the joints are very nice and tight on the display bar. It can absolutely support the figure's weight if you want to depict Roy leaping in the air while firing off some wild trick shots. 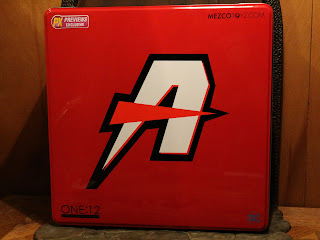 * Like the Fully Loaded Punisher figure, this exclusive figure comes packaged in a metal tin with a hinged lid. It's nice looking, although I do admit that I miss the consistency of the traditional 5-panel boxes. 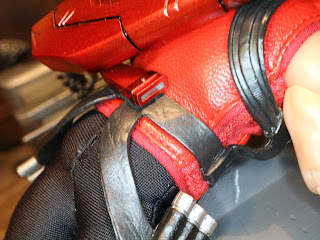 * Roy has a sheathe on the back of his belt but it doesn't hold the knife very tightly. It's a loose fit and the knife tends to slip out pretty easily. Be careful! 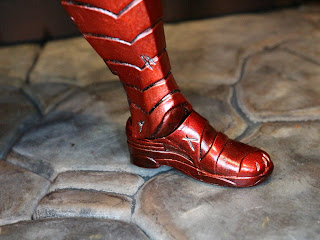 * Like with Captain America and Green Arrow, the ankle joints don't have a lot of pivot to them. The hinge works OK, but I'd really like to be able to have some lateral movement. Mezco seems to be addressing this on newer figures but since this is a repaint of a previously released figure, the problem hasn't been rectified. 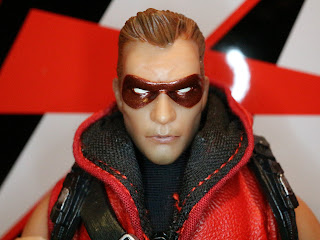 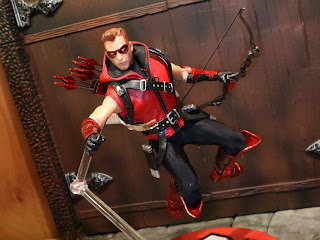 Like Zoom, Arsenal is a One:12 Collective exclusive variant that is actually a completely new character. While Arsenal is in many ways the same figure as Green Arrow, he's also pretty different due to a new headsculpt, his hoodie, and the red and black color scheme. Overall, I feel like Mezco fixed a few problems that Green Arrow had here (the better bow string and some better tailoring) but didn't offer up a whole lot new. Arsenal is a Great figure, no doubt about it, but he just isn't exciting for those who already own Green Arrow.

If you're looking for more DC Universe One:12 Collective reviews, check out the following: