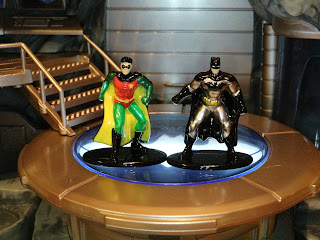 When it comes to action figure playsets of the 1990s, Kenner's various Batcaves dominated toy aisles. While Toy Biz released a Batcave during their brief Batman movie 1989 movie, it was Kenner's 1990 The Dark Knight collection that introduced the ultra cool Batcave that unfolded into six different segments and became a staple of toy shelves and Batman collections through four films and Batman: The Animated Series. Over the years we've seen a number of Batcave playsets and they're still hitting shelves today (although many are now part of the Imaginext and Lego collections). I'm looking at one of the most recent Batcaves to hit toy shelves and it's from Jada Toys' DC Nano Metalfigs line (Mattel also has a repainted version of last year's BvS Batcave out for Justice League currently in stores). While it's billed as more of a display environment than a playset, I have to say that I think this is one of the best Batcaves released. It feels very true to the comic depictions of the Batcave and isn't overloaded with extraneous play features. It also only costs $25 dollars. Yes, you heard me right. $25 bucks for this super cool playset, complete with two die-cast metal minifigures. This thing is amazing and I'm going to show you why after the break... 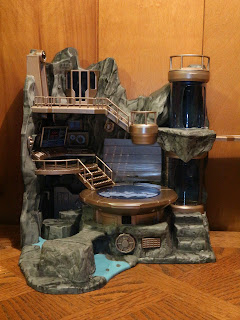 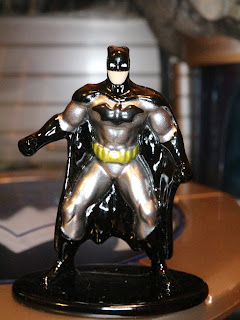 *Let's start with the first of two figures included with the set: Batman! While this sculpt has been reused a few times in the DC Nano Metalfigs line, it's has always been painted differently. This version is a very modern Batman with a gray suit, black cape and cowl, and a yellow utility belt. He's a great minifigure. 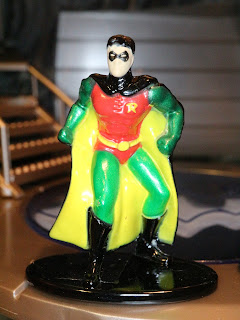 * You also get Robin with this set. As far as I know, this is the only way to get Robin (or any member of the Bat family besides big daddy Bats himself) in the Nano Metalfigs line. If I had to wager a guess, this is a Tim Drake Robin. The pose is a little odd, but overall I think it works for such a small figure (around 1 3/4ths inches). 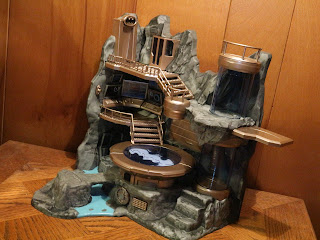 * Here's the cave in all it's glory. I love it. It's a very traditional looking Batcave but it does kind of remind me of elements from the Toy Biz and various Kenner Batcaves over the years. This is an impressive looking display set and while it won't be of much use to collectors trying to integrate this with anything other than minfiugres, a good Batcave is a good Batcave. 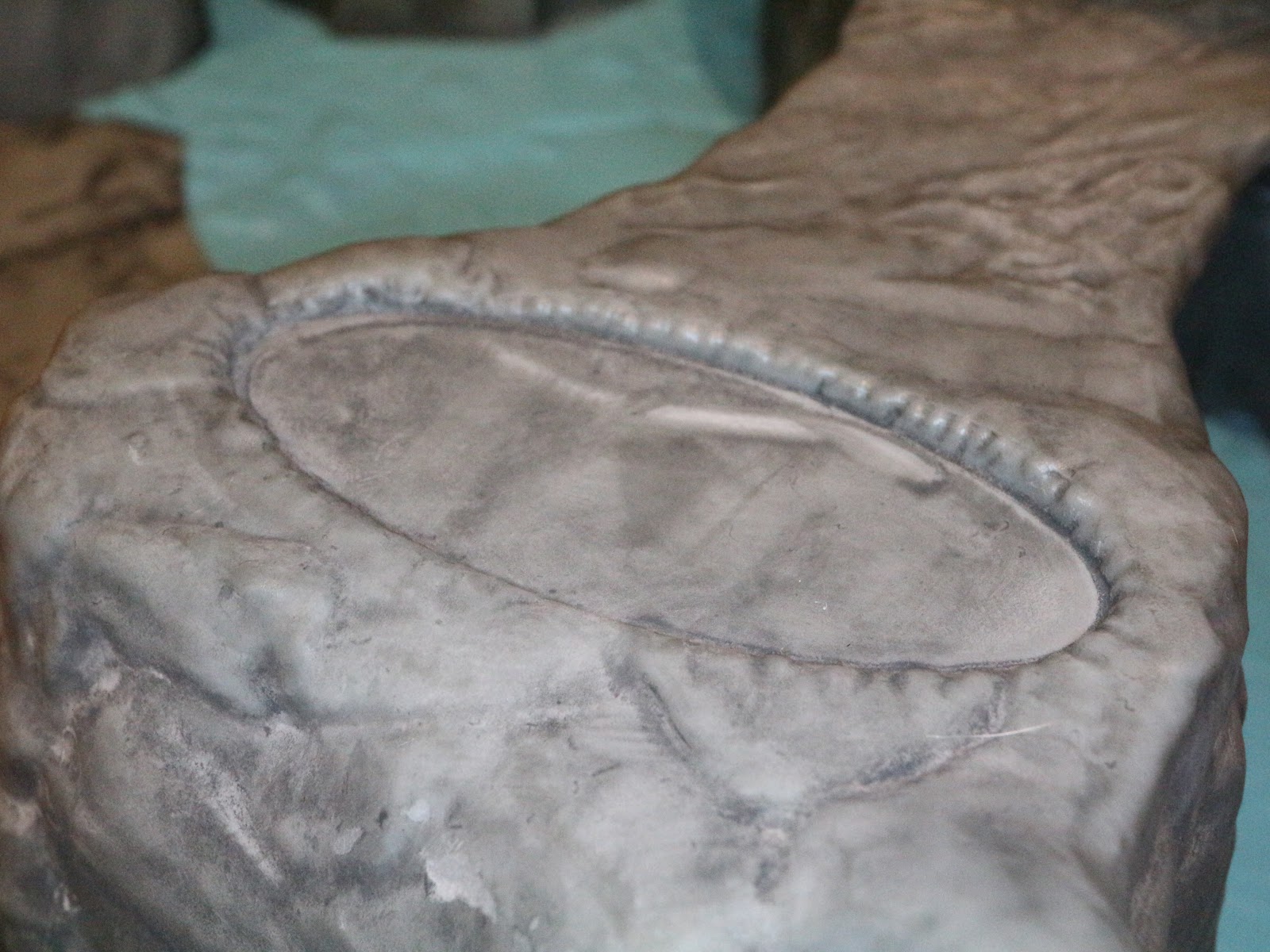 * The set has a number of indentations on it that are designed to hold the little die-cast figures. They're not really needed but I'll admit that I do like their presence. It somehow just makes this seem a bit classier. Don't ask me to explain that! I just like the look of it. 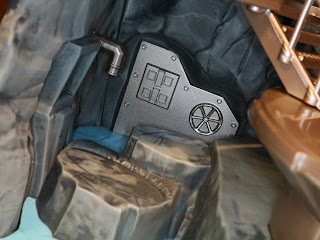 *The bottom left area of the cave features this cool little recessed area that features various bits of exposed stone, various pumps that prevent flooding in the cave,and some pools of water. It's a cool little area for hiding villains (especially Killer Croc!). 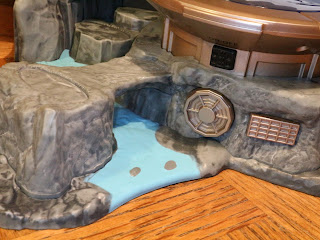 * The front of the set features a rocky island accessible by a natural ledge. There's water flowing beneath it and it makes a cool location of an epic confrontation of some sort. There's also more little pipes, tubes, and bits of machinery hanging around. The detail on this set is extremely nice; much nicer than anything I can recall in recent years on a playset, even in a much larger scale. The paintwork is pretty impressive, too. Simple but effective. 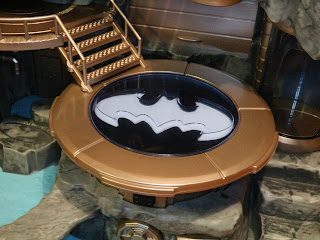 * There aren't a lot of "play features" really, but the centerpiece of this set and one of the aspects that really does qualify as a play feature is this light up platform. Put in three AAA batteries (not included) and the Batman symbol lights up. It's a really cool effect and it's easy to activate via the black button visible near the bottom of the picture to your right. 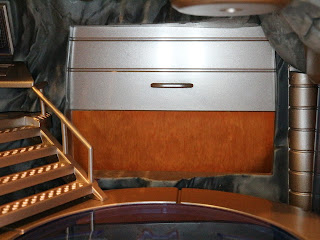 * Another feature is this opening door. It both opens and closes all the way (I kind of have it in the middle) to, I assume, allow a Batmobile to head in and out of the cave. It's not really a functional feature since there is no outside ramp, but it looks cool nonetheless. 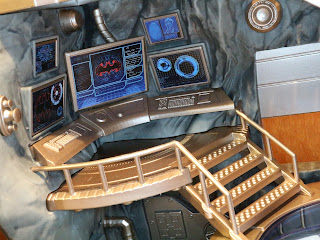 * One of my favorite parts of this set is the cool Batcomputer system tucked away in this corner. It's accessible via a short stairway and gives Batman a cool place to sit and brood while working over some case. The stickers on the monitors look great and add a lot of life to the display. 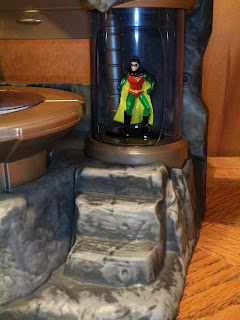 * To the bottom right of the playset is a carved stairway that leads up to a tube. The tube doesn't do anything but I'm assuming it's intended to be an elevator of some sort. it doesn't function, but it does provide another unique way to display a few figures. 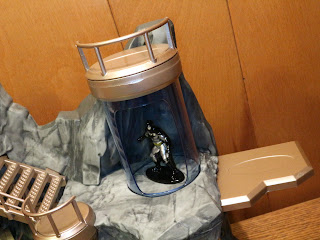 * And here's the upper tube, a platform, and an observation post on top of the set. Again, the intention of this set seems to be more focused on display rather than play, so this gives you quite a few more cool places to display figures. 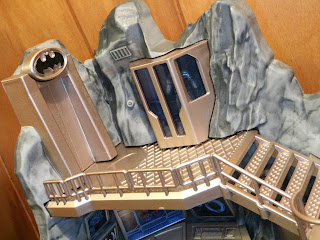 * On the top left is a catwalk that features a non-functioning door (perhaps leading to stately Wayne Manor?) and the armory. 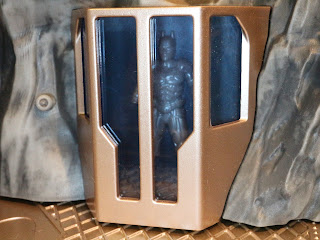 * When you peek inside the armory you can actually see a Batsuit inside. That's a really cool detail! 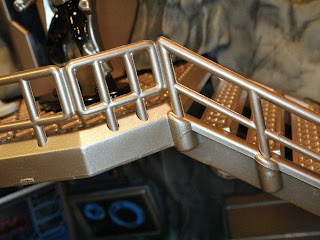 * You do have to put the set together. That's not a negative, though, and I really enjoyed doing it. What is a negative is that some of the pieces do require a very careful touch. Be especially careful with the railings. Once together, though, the set feels extremely sturdy. 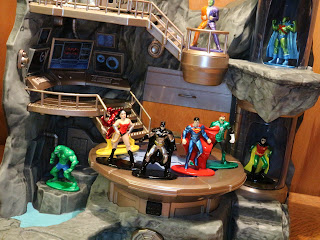 $25 dollars. For $5 dollars more than your standard action figure from Hasbro or Mattel, Jada Toys has delivered a playset. It's a smaller scale but, still, that's incredible. I know Star Wars collectors have been asking for more playsets for the past few years for the 1/18th scale line and are always told how expensive they are. Imagine something twice this size that was more of a display environment. Wouldn't that be cool? I'm impressed by this offering and I'm easily going to give this set an Epic rating., The quality is awesome, it looks great, and it's super fun to display figures on. Buy this, a few metal figures, and have a great time with it!

If you're looking for more Batcave, check out my review of the Blast and Battle Batcave from the Batman: Power Attack line.

I've reviewed so many Batman figures that the Caped Crusader has his own review archive. Check out the Dark Knight Gallery for dozens of Batman reviews!