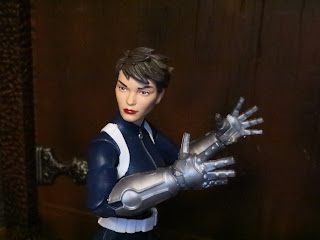 So technically this figure is billed as Quake, the Inhuman SH.I.E.L.D. agent who's pretty skilled at everything and with the powerful of vibration manipulation. That's pretty cool as Quake, AKA Daisy Johnson, is a "newer" character (you know, from the last 20 years "newer") who has appeared in a number of prominent stories, appeared in the television show Agents of S.H.I.E.L.D., and has not had a Marvel Legends figure yet. Plus, it's always fun to get more S.H.I.E.L.D. agents. This figure also includes some extra hands and a second portrait which turns her into Maria Hill, so the set technically includes two characters. Maria Hill's another character from the past twenty years who has been in plenty of prominent stories and appeared in the MCU films, but he's has a few figures previously. An MCU version based on Cobie Smulders was included in a three pack with Nick Fury and Phil Coulson in 2015 while the previous comic version was part of Hasbro's early Marvel Legends efforts as part of a 2-pack with Iron Man in 2008. Whether you want Quake, Maria Hill, or both, this set is pretty welcome. Let's take a look at Quake (and Maria Hill) after the break... 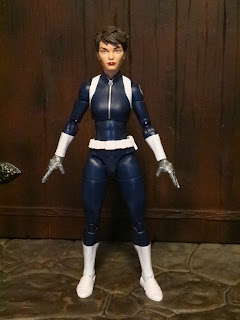 * Whether you're using this for Quake or Agent Hill, the body works great for a basic female S.H.I.E.L.D. agent. It's a newer body, though I don't recognize it immediately. The shoulder straps and zipper are molded parts of the costume while the belt and thigh bands are separate pieces added on. It looks fantastic no matter who you display it as. 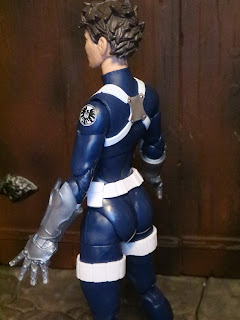 * Here's a shot from the side so you can see the S.H.I.E.L.D. emblem stamped on Quake's left shoulder and the back of her harness. 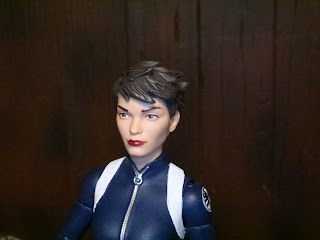 * While Quake has been drawn different ways in the comics this portrait seems to fit her quite well. Her short, choppy haircut looks great and there's a decent amount of character in her face. 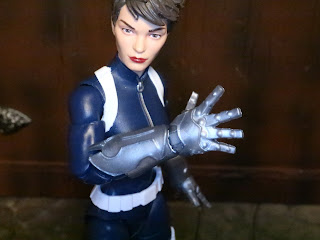 * Her gauntlets...help her control her vibrations, maybe? I thought she was immune to vibrations, so I'm not sure why she wears them. They look cool, though. The hands are standard hands, just more armored looking, while the bracer parts fit over her forearms. 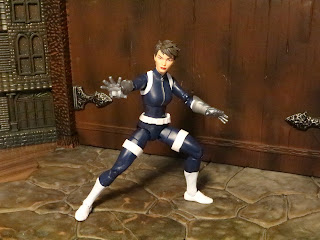 * Quake uses newer parts so her articulation is excellent. Like most Marvel Legends figures, she's a really sturdy, well made figure with a great range of motion. 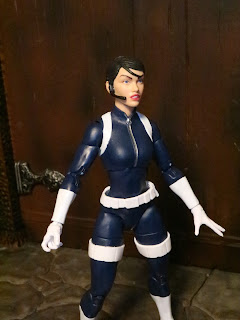 * Remove the gloved hands and pop on the Maria Hill portrait and you've got Maria Hill! Honestly, Maria Hill is the main reason I purchased this figure as I've wanted her for my "comic versions of the MCU cast" collection. It's a good headsculpt, much better than the one from the 2008 set from what I can tell. Maria's hair is shorter and very plastered down. Very neat and tidy for someone who's all business as a Director of S.H.I.E.L.D.  She's also wearing a headset because she's always gotta be keeping up with intel and giving orders. 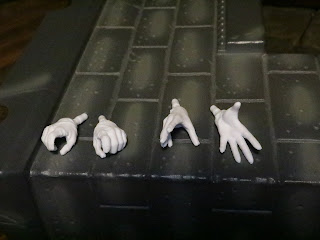 * There are four hands included for Maria Hill: A set of pistol grips and a set of gesturing hands. hey swap easily and give her some further display options. 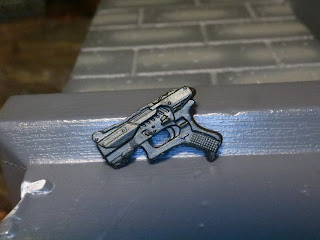 * There's also a pistol included to arm Maria Hill with. We've seen it before (I know it came with Black Widow: Deadly Origin) but it's a decent side arm. The barrel is hollow so you can put any stray blast effects you have in there, too. 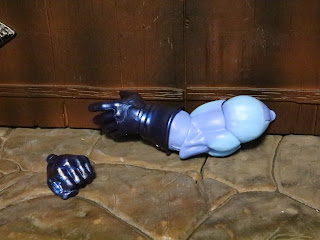 * Quake/ Maria Hill comes with the left arm of the Controller, the Build-a-Figure for this series. I'm not sure if I'm going to build the Controller so if you're interested in these pieces hit me up. He actually comes with an alternate left fist as well, so you'll be able to swap hands on this guy if you build him. 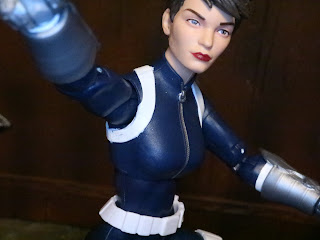 * My only negative here is that the paint work on the shoulder harness is a bit sloppy with a lot of blue showing through the white. 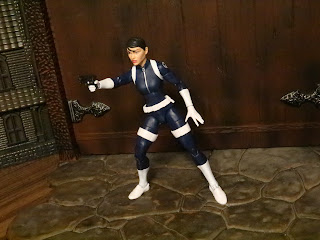 Whether you're picking this up because you want to add Quake or Maria Hill to your collection, you should be fairly pleased. It's a pretty cool set that should be of use for folks wanting to build up their S.H.I.E.L.D. collections, too. I wouldn't be surprised if a number of collectors purchased two sets so they can display Maria Hill and Daisy Johnson at the same time. This is a Great set and it turned out quite nicely. This series definitely has a lot of redos of older figures in it and this one is a welcome redo of Maria Hill and a nice introduction for Quake into Legends.