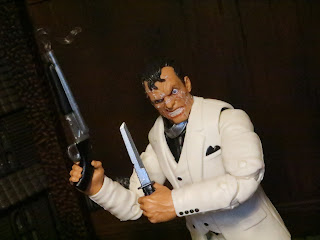 Jigsaw is the most recent Walgreens exclusive Marvel Legends figure and I was able to order him off of their website quite easily. Not only does Jigsaw's presence add another villain to your shelf but he also gives the Punisher a nemesis. Yeah, the Punisher has fought a lot of villains, but Jigsaw is probably more closely associated with Frank Castle's list of villains than that of any other hero. Jigsaw was released by Toy Biz (with a variant) but that was back in 2006 so a redo was definitely in order. Walgreens sure is getting some good selections for their Super Villains exclusives this year. First Baron Zemo and now Jigsaw. I wonder who will be next? Ready to check out another classic Marvel villain? Then join me after the break... 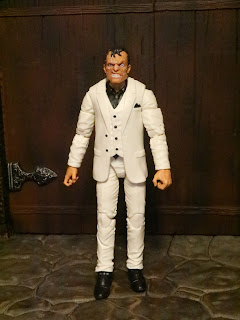 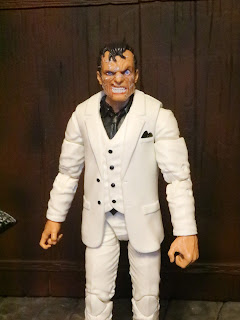 The Positives:
* There is some reuse on Jigsaw from some MCU suited figures (I think he reuses Nicky Fury and Happy Hogan parts) but Jigsaw's three piece suit seems completely new and it looks great. I love the white and black suit he's wearing. Very fashionable and very eye-catching. It's a neat, clean look that just clashes oh so nicely with his disfigured face. the paintwork on his suit , while minimal, is excellent with neat, clean buttons and a swanky pocket square. 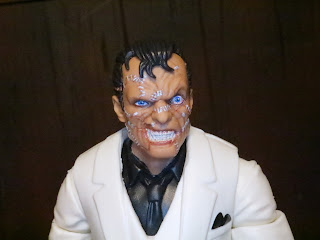 * Jigsaw has one of the best headsculpts I've seen on a Legends figure. Check out that face! Not only is his expression incredible and full of character but there are so many little details like staples and scars. And boy are his eyes crazy! This is definitely an unhinged guy! There are a couple more scars and such on the back of his head, too. Hasbro went all out on Jigsaw, delivering a very grotesque portrait of Billy the Beaut. 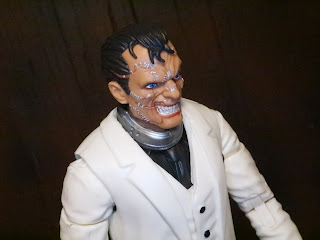 * Jigsaw has a removable collar that fits around his neck (just pop his head off). I think it's supposed to be part of an exo-skeleton that he sometimes wears, and so we're just seeing the collar popping out from underneath his suit. It could also be a neck brace, though; perhaps something needed after a particularly brutal beating received at the hands of the Punisher. 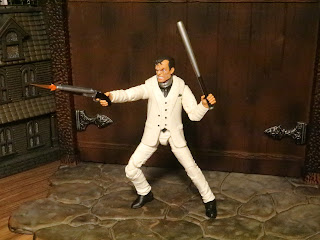 * While the suited bodies tend to be a little bit more restrictive than your average Marvel Legends Series body, this one is certainly not bad. The torso movement is restricted by the jacket but everything else moves just fine. Of course, Jigsaw is sturdy, durable, and able to stand up to plenty of play and posing. 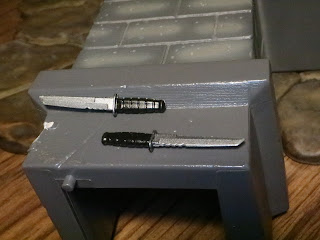 * Jigsaw is loaded with accessories. He's got sharp stuff, stabby stuff, blunt stuff, and shooting stuff. Let's start with two knives. They're the same sculpt and he can hold them easily if he wants to get in close and mess someone up. I'm sure these have been used before with other Legends figures but I don't recognize them off hand. 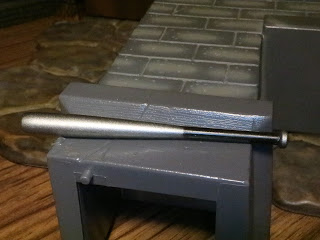 * Next up is a baseball bat. This is one of three accessories that is reused from the Ultimate Riders the Punisher figure, though the paint is different. Jigsaw has an aluminum bat while Frank came with a "wooden" bat. 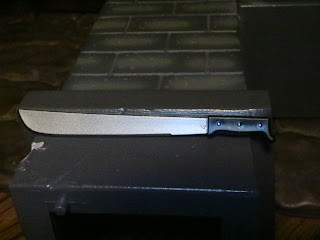 * Jigsaw's second weapon borrowed from the Punisher is this really cool machete. Nice sculpt, a shiny silver blade, and painted rivets on the handle make this a really fine looking weapon. Nasty, but fine. 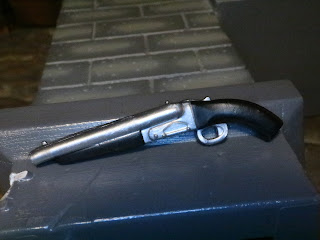 * His third weapon borrowed from ol' Frank Castle is this sawn off double barrel shotgun. Compact, lethal, and perfect for getting up to all kinds of villainy. 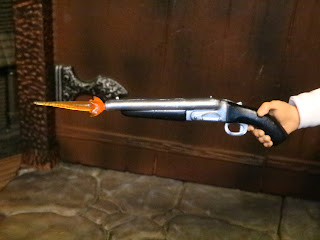 * Jigsaw comes with two firing effects for the shotgun, both of which are reused from the Black Widow: Deadly Origin figure. There are two "blast" effects, one shorter and one longer. 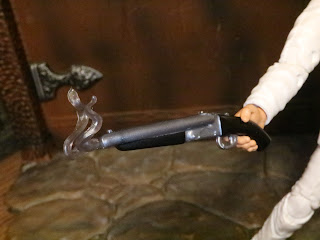 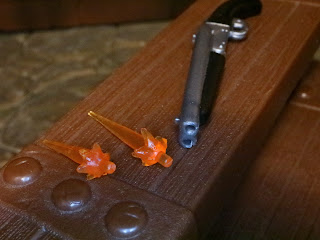 The Negatives:
* Right out of the package the blast effects really didn't fit into the barrels of the shotgun. I had to use a smile tool to slightly stretch out the holes but it was simple and easy. Now they fit in there perfectly. Both blast effects won't fit in unless you angle them but it is doable. 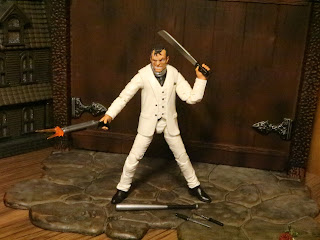 Jigsaw turned out really well. While, yeah, he's just a guy in a suit, he comes loaded with goodies and has one of the best Marvel Legends headsculpts ever. Getting so many extras with him definitely increases the value, too, and unique pieces like the new jacket and the neck brace make him feel quite special. This is a Great and a 1/2 figure and definitely one of my favorite Walgreens exclusives to date. Hasbro really made sure to load Jigsaw up with goodies for causing mayhem and it really pays off.
This is the first figure of Jigsaw I've reviewed on the site. For more Marvel Legends Series reviews check out the following:
Marvel Legends Series by Hasbro (2016)
Binary
Crossbones
Darkstar
D'Spayre
Enchantress (Mystic Rivals)
Firestar
Frog-Man
M.O.D.O.K.
Nico Minoru (Mystic Rivals)
Ultron
Ursa Major
Marvel Legends Series: Avengers by Hasbro
Taskmaster