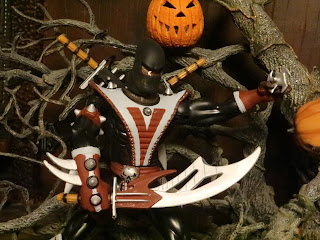 I love reviewing toys I remember from childhood, even if it's stuff I didn't have. I've been reviewing more older stuff over the past year or so than I had in some previous years but 31 Days of Toy Terror is always such a fun time to jump in and check out some older figures. Since I've gotten into Spawn a lot more over the past year or so, I'm absolutely going to deliver plenty of Spawn themed reviews, particularly of the figures from the 1990s. At one point I even considered this year having the theme of "Spawntober" but I eventually opted against it. Still, there's lots of Spawn here. Today we're taking a look at Ninja Spawn from 1995's series 3. Ninjas were big news in the 1980s and 1990s (they still are, too) and my guess is that at some point during those years you dressed like a ninja of some sort for Halloween. Regular ninja, undead ninja, Mortal Kombat styled ninja, or a Teenage Mutant Turtle ninja; ninjas just worked their way in anywhere they could. Even the Shadow, a 1930s pulp character, became a ninja in 1994. So, yeah, Spawn became a ninja, although this isn't Al Simmons, the star of the long running Spawn comic series. This is actually an unnamed Japanese man from centuries ago who was also turned into a Spawn. He's showed up in the comics again recently, though, and while I read trades (I'm behind) perhaps he'll have an actual name soon. But he's still a Spawn. A Ninja Spawn. Grab a fun-sized candy bar without being seen and join me after the break... 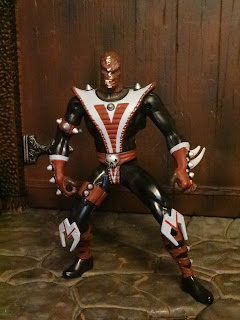 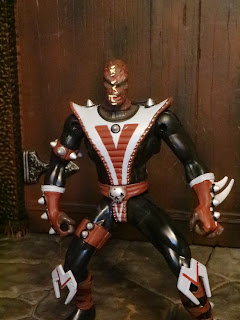 * Where to start? How about by acknowledging that Ninja Spawn has a pretty sweet costume. He's wearing the typical Spawn black, red, and white, and it looks really good here. He has a unique look with lots of cool extras like a skull-shaped belt buckle, a spiked bicep cuff, and a spiked thigh band. 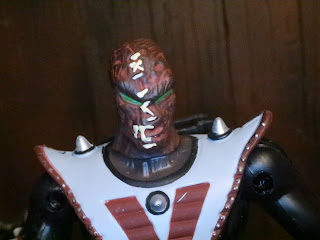 * Ninja Spawn's portrait looks al burned and gnarly, kind of like what we see when Al Simmons is unmasked. Ninja Spawn is even sporting the same stitched together head. I wonder if this was always intended to be a different character from Al or if that occurred later on before the bio was written? 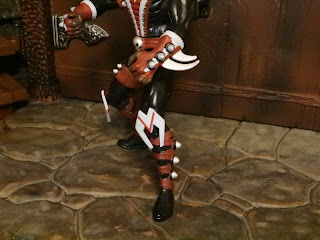 * Ninja Spawn's legs are wrapped in red strips of cloth (with spikes popping out) and he's sporting some cool knee pads. He's got cool, Batman-like wrist spikes too. 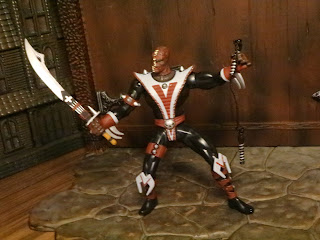 * This guy is from 1995 so the articulation is rather what you'd expect from that era with just a few cut joints on the arms (a bicep cut on the right arm and the forearm cut on the left arm). Wait.... he also has swivel/hinged shoulders? Hey, that's pretty cool! Yeah, they existed before obviously, but they just weren't very common. They're great here for allowing Ninja Spawn to use all of his ninja goodies. 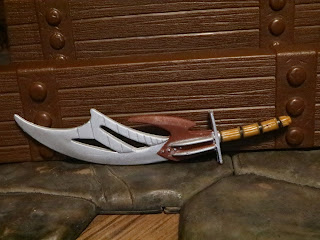 * Wondering what all goodies Ninja Spawn comes with? First up is a very elaborate sword. The blade has some cutouts in it and is wildly exaggerated on the non-bladed side. The handle also looks unique, kind of like the handle of a kendo stick. 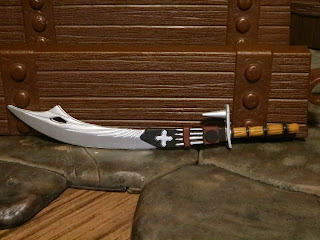 * Ninja Spawn comes with a second sword, this one with a slimmer (but still exaggerated) yet longer blade, a unique handle, and some rather ornate details at the base of the blade. There's also a sizeable spike atop the hand guard. 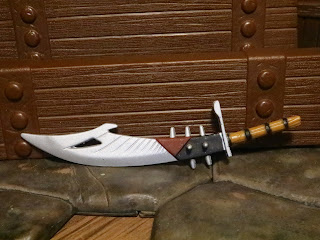 * And there's a third sword! This one has a very solid blade, an extended hand guard, and of spikes along the base of the blade. 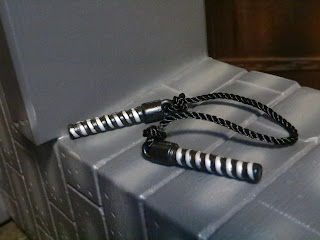 * What does Ninja Spawn use when he doesn't want to cut anyone? How about some nunchaku? The handles are given a black and silver paintjob and there's a string keeping them together. The string is longer than you'd have in real life but it does make for a more dynamic accessory. 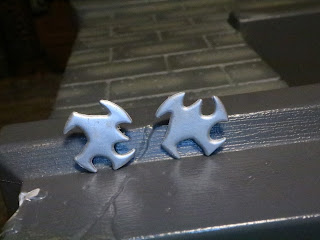 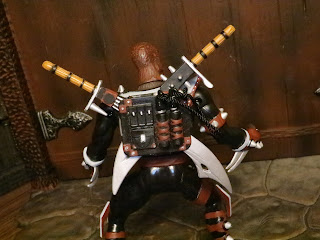 * Ninja Spawn sure comes with a bunch of stuff but where's he going to keep it? He actually has a backpack permanently attached to his back which can store some of his gear. A flap on the backpack opens and two of the swords can fit inside while the nunchaku slip into two slits on the backpack. 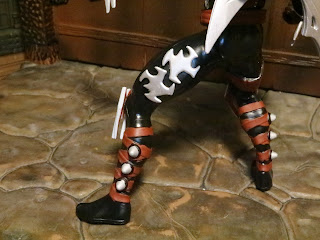 * The shuriken have little pegs on the back and plug easily into two small holes on Ninja Spawn's left thigh. 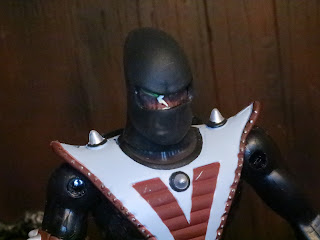 
* Unfortunately, it's made from a rubbery material that's tough to get over Spawn's head. It also feels like something that could tear after taking it on and off again. 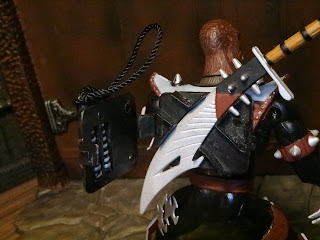 * The backpack has an opening flap so you can stow the swords away. The flap is a simple bending piece of plastic, though, so you'll see stress marks on it pretty quickly. Be careful! 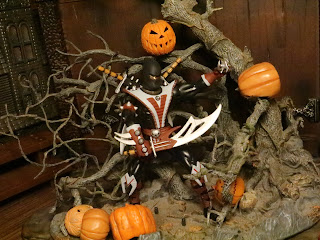 Ninja Spawn is just a really cool figure and I love how many cool weapons he comes with and how he's able to carry all of them with him. I love the creativity and design of so many of the earlier Spawn figures and Ninja Spawn is an Epic figure and a great example of McFarlane Toys' work from that period. I picked this guy up at Retro Toys and Collectibles in Cherryville, NC late last spring and I've been saving him for this fun, spooky month. Undead ninjas, y'all. What will they think of next?


If you're looking for more of the unnamed Nina Spawn, check out my review of Ninja Spawn from the modern Spawn line. I've looked at many other Spawns, too: For Al Simmons, the classic Spawn, I've reviewed the classic Commando Spawn and Nuclear Spawn, the movie based Burnt Spawn and standard Spawn, the Mortal Kombat 11 Malefik Spawn (Bloody Disciple) and Spawn (Bloody), and the modern Spawn with throne; for Chenglei, there's the modern Mandarin Spawn Deluxe; for Sir John of York there's the classic Medieval Spawn; there's also the modern Raven Spawn (Small Hook), AKA Kray-Von Gore.
For more reviews from the classic Spawn line check out the following:
Clown
Commando Spawn
Cosmic Angela
The Curse
The Freak
Medieval Spawn
Nuclear Spawn
Overtkill
Tremor
Posted by Barbecue17 at 10/02/2022