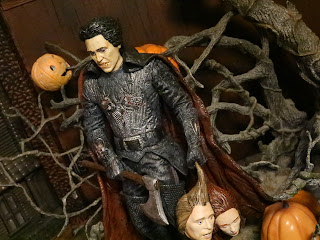 Halloween is right around the corner so today I've got a special review from one of my favorite horror movies: The Headless Horseman from Tim Burton's Sleepy Hollow. I've loved the movie since I saw it in the theater back in 1999 with my dad and I owned two of the accompanying McFarlane Toys action figures back in the day. I purchased Ichabod Crane and the deluxe Headless Horseman with horse (the diorama for which appears in the background of most of my 31 Days of Toy Terror reviews) back when the movie came out but I didn't complete the line until the mid-late 2000s. Well, by complete I mean pick up the other two figures. There were only four figures in the line which isn't that surprising as there aren't that many characters that would make great action figures, but I'm still not over the fact that they didn't make Christina Ricci as Katrina Van Tassel. This version of the Headless Horseman doesn't come with his horse or his sword but he does have a head. Four of them. For being known as "Headless," he has more heads than most action figures. Kind of weird, right? Well, technically two of them aren't his. Two of them are, though. I love almost anything to do with The Legend of Sleepy Hollow and I'm still glad these figures exist. Let's take a look at the standard release of the Headless Horseman after the break... 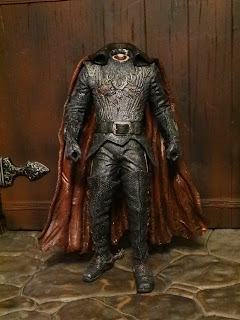 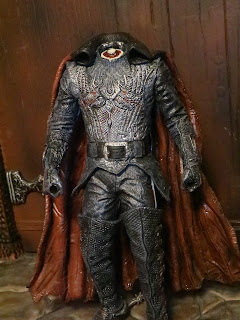 * From around 1998-2001 McFarlane was really transitioning from their traditional detailed action figures with play features to far more realistic action figures that were really designed to be placed on the shelf in one or two cool poses. While the articulation might be lacking, the sculpt and paint are really impressive, much of which still holds up decently today. Take the Headless Horseman here: You really have to have this guy in hand to appreciate the intricate detailing of his armored outfit. The proportions are great and the way the outfit and the cape hang really capture a sense of motion, like he's striding forward with malicious purpose. 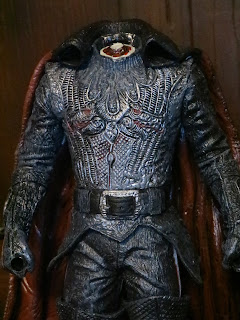 * Here's a close-up of the excellent paint work and the insane level of detail on the Horseman's armor. That is some might fine work right there. The dragons on the armor are really fantastic. 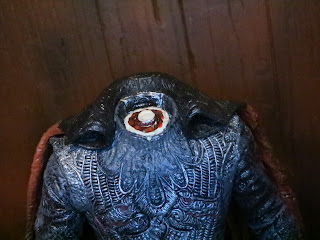 * The first portrait really captures the Headless Horseman's headless nature. It looks just like Ray Park in the suit! OK, so it's just a severed stump. That's still pretty cool and accurate. Quite grisly, too, especially considering you could buy these figures at Walmart back in 1999. 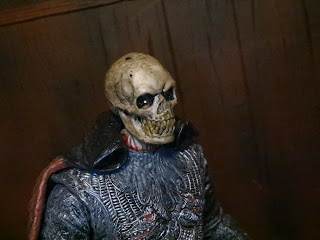 * The Headless does come with two heads and they both can fit onto his severed neck by sliding into his collar. They stay on fairly well, too. The first head is the Horseman's skull, which is a key item in the film. It's really nicely stylized and the paintwork is fantastic. Those teeth are wickedly cool, too. I love it. 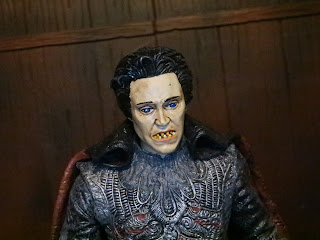 * The second headsculpt is Christopher Walken as the Hessian soldier. I really wish we lived in a world with more Christopher Walken action figures, but this one is definitely recognizable. At the time the likeness was insane but, even by today's standards, it isn't bad. The creepy eyes, the sharp teeth, and that patented Walken hair really seal the deal. This guy looks ready to stab you in the face with a soldering iron or offer you a glass of fine shom-pon-ya. 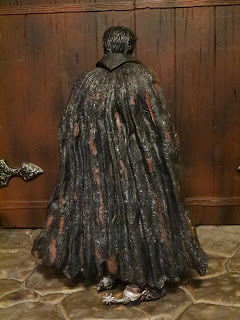 * The cape is made from a rubbery material that hangs down nicely, isn't too heavy, and holds a lot of detail. It's looks quite worn and beaten, a mixture of red and black with parts of the red lining now visible underneath the decaying black outer layer. 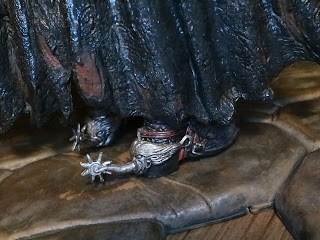 * Check out those spurs! They're solid pieces (so, no, they don't spin) bit they look pretty intimidating. The spurs are designed to look like the tongues popping out of the mouths of some long haired being. 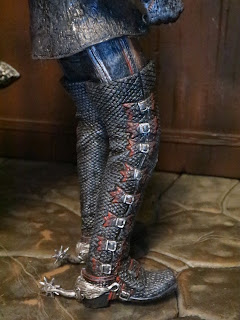 * Those boots are rather intricate, too. They're some insanely heavy duty riding boots with lots of buckles on the sides. How long do you think it takes to put them on and take them off? 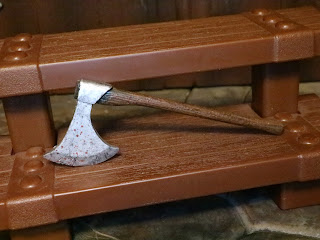 * Since this figure seems to be based largely on the scene where the Headless Horseman kills the midwife and her family, an axe is included. Since the Hessian soldier seems to delight in claiming the heads of his enemies as trophies, an executioners axe is a standby for him. It's a solid piece with some might fine paintwork to really show the age of the metal and the wood. There's also a fine spatter of blood on the blade. 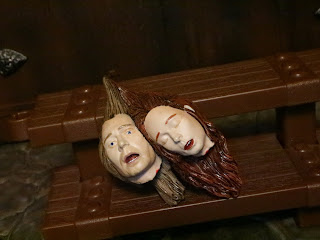 * And here are the heads of two of the Horseman's victims: Midwife Killian and her husband. They're one solid piece but they're fully painted with some truly unsettling expressions. Their hair combines together into a "handle" of sorts so the Headless Horseman can carry them around. 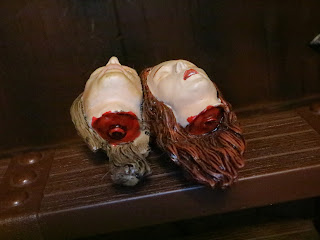 * The bottoms of the heads are also quite bloody. Again, these were just chilling out in the regular toy isles back in 1999 as far as I can remember. Crazy, right? 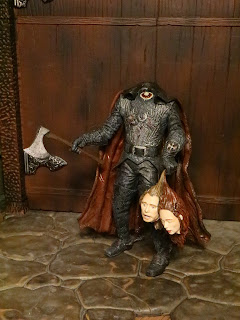 * Does the Headless Horseman have articulation? Yes. There's a fair amount of movement in his arms, but not much. You can kind of position the axe a bit or change how he holds the heads, but that's it. In 1998 and even early 1999 McFarlane was putting out some toys with fairly good articulation. These movie based figures definitely were part of the trend towards minimal articulation. This figure looks great on the shelf but it's not something you can really mess around with too much. 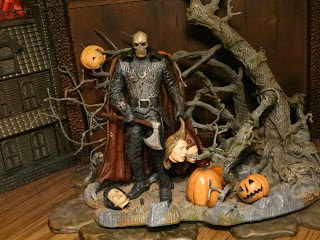 This version of the Headless Horseman was pretty incredible at the time of its release and ended up being a fairly tough figure to find if I recall. I never owned one, probably because it was tough to track down and I never had money the times I saw it (I would have been a sophomore in High School when this was out so my funds were limited and I wasn't picking up as many non Star Wars or non-video game based action figures at the time). Even today, the only thing really setting it back is the lack of articulation. Most of the sculpt rivals similar figures you could find on the shelves and the accessories are top notch. This is still an Epic figure from a mighty fine horror film.

So...tomorrow's Halloween. Any guesses as to what I'm going to scare up for you?

For more figures from Sleepy Hollow check out the following:
The Crone
Posted by Barbecue17 at 10/30/2022