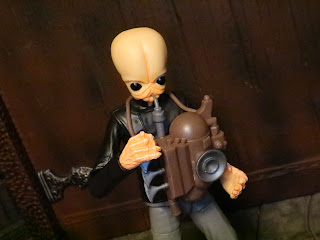 Last week I reviewed the Black Series Figrin D'an figure and today I'm following up with the deluxe Nalan Cheel (The Modal Nones). Since Figrin D'an and the Modal Nones all look alike there's really no difference between the two figures themselves. It's the instruments that differentiate the bandmembers so Nalan Cheel comes with his bandfill, the drums for Sun'il Ei'de, and the ommni box for Tech Mo'r. Want to build all seven members of the Modal Nones? Technically, you just have to purchase 1 deluxe Nalan Cheel figure and 6 Figrin D'an figures. I'm not planning on building a full band but I'm fairly satisfied with how Hasbro released the band. I'm sure at some point they could release a deluxe exclusive set, though I'd rather they release some Bith musicians in a barebones package that could be ordered for a bit less so we don't have to have so many leftover instruments. Let's take a look at Nalan Cheel and some of the larger instruments for the Modal Nones after the break... 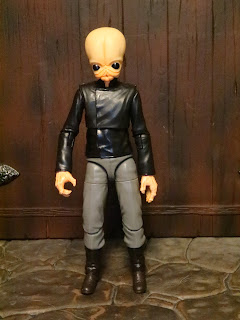 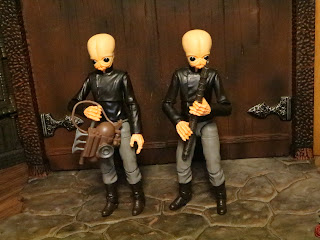 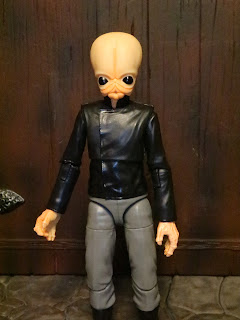 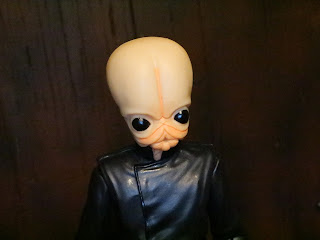 * Since all the bandmembers look the same you can pretend this guy is any of the seven you want. The headsculpt is excellent and features some fantastic detail on the face and around the eyes, as well as some great paint effects to highlight the bulbous head and the cleft in the middle of it. The mouth is hollow so that instrument mouthpieces can fit inside. 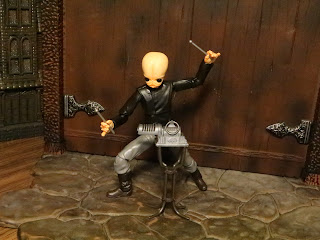 * The articulation is as good on the Bith band members as on pretty much any other modern Black Series and they can hold most of the instruments quite well. The figure doesn't have the butterfly hinges for the shoulders, which I think would have been a big help, but they do have balljointed necks and balljointed wrists. Those are a big help in setting up poses where the mouthpiece needs to fit in the mouth or the hands need to be holding the instrument in a certain way. 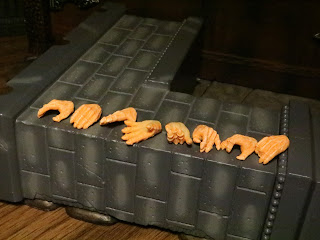 * Nalan Cheel comes with eight pairs of hands in different configurations. These can be swapped out on the Figrin D'an figure to give each band member the best hand for the job. There are special hands for playing the Ommni Box, gripping instruments or the bandfill, and holding the drumsticks for the drums. The wrist is balljointed and the hands pop on and off fairly easily. 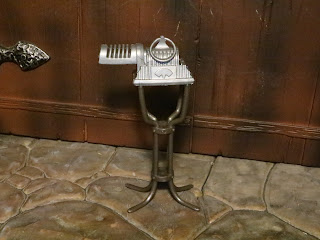 * Let's start looking at the drums, played by Sun'il Ei'de. These are rather unique and don't look like your standard drums. It looks like some sort of an electronic box with a ring hanging down the front. The drum stand is removable from the instrument itself, though there's no real benefit to doing so. 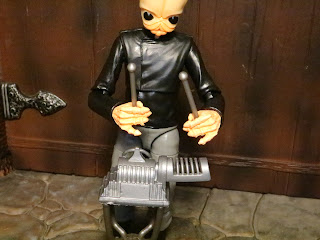 * Two drumsticks are included to allow Sun'il Ei'de to play the drums. They're simple pieces but they fit well in the included gripping hands. 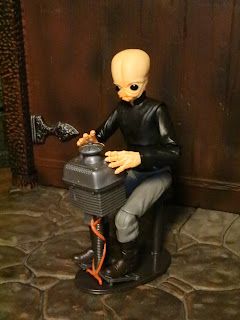 * Next up is the ommni box, the synthesizer-like instrument played by the usually inebriated Tech Mo'r. The ommni box is a complex device mounted on a pole with pedals, an attached base, and a small seat. The paint detail is OK, a bit lacking when compared with pictures of the film prop, but it is clear what this is supposed to be. The figure sits well on the ommni box's attached seat and looks really good playing it. It's a pretty cool setup. 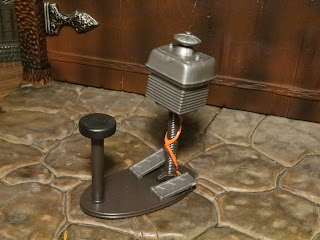 * Here's a shot of the ommni box by itself. It's overall quite well done; definitely more impressive than the little box the POTF2 Cantina Band member held in his hand. 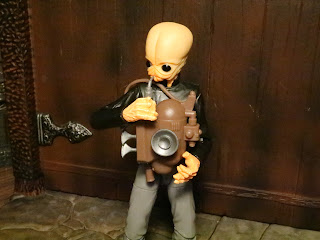 * Last up is Nalan Cheel's signature instrument: The bandfill. The bandfill is an interesting looking device that seems like some sort of space bagpipes. It's covered with reciprocator horns, so I assume it functions like a brass instrument. There's a strap so Nalan Cheel can wear it over his right shoulder and the various horns are given a silver paint hit. 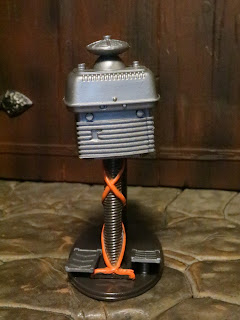 * The ommni box in my set seems to be incorrectly glued on. It's at a weird angle that seems to be a bit off to my eyes. Plus, the top of the box really needed a few more paint applications. 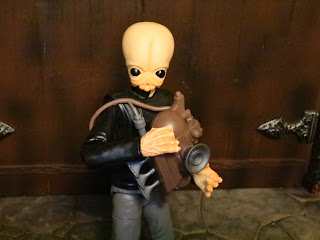 * The bandfill really should fit over the neck of the figure but that seems pretty impractical, even with popping off the figures head. It really seems designed to fit around his right shoulder which makes it set weird in his hands. 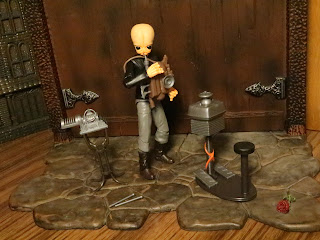 The base figure of Nalan Cheel is just as good as Figrin D'anand while his instruments are larger and more complex, they also seem a little under painted for a pricier, deluxe set. I like the inclusion of the extra hands, though. It's a nice touch. This is a Good and a half set and I like that you only have to purchase one Nalan Cheel if you're constructing the Modal Nones. The instruments just feel a bit underwhelming, though, especially for their size and the fact that this set is about $40 bucks. I was hoping for a few more paint applications to bring out the sculpted details.


If you're looking for more of the Cantina Band/ Figrin D'an and the Modal Nones, Nalan Cheel, Tech Mo'r, or Sun'il Ei'de, they do appear in the background of the old Galoob Micro Machines C-3PO/ Cantina Transforming Action Set.