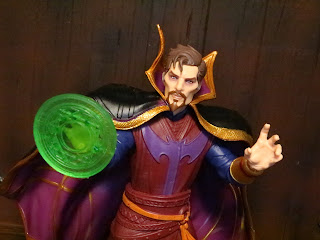 I thought all of the episodes of What If? were pretty good but the Doctor Strange episode "What If...Doctor Strange Lost his Heart Instead of his Hands?" was one of the best. It was a dark, creepy, well made episode that was in some ways stronger than the actual Doctor Strange film. I wasn't planning on picking this guy up at first but when I stumbled upon him at a GameStop during a sale (ended up getting him for 20% off) I decided to snag him. Currently the Doctor Strange in my display is the Marvel Now! version from 2015 (I'm really waiting for the Walmart exclusive classic Doctor Strange coming next year) but this guy makes a great alternate figure who I can find a place for on my shelves. Let's take a look at Doctor Strange Supreme after the break... 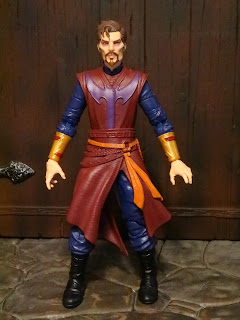 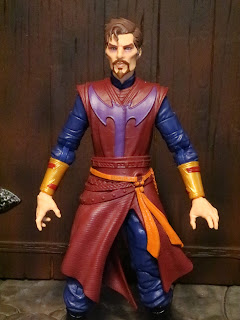 The Positives:
* Doctor Strange seems to be built on elements of one of the many movie based Doctor Strange figures while also featuring his fair share of new parts. His colors are mixed up a bit which looks pretty cool and nicely differentiates him from your standard Doctor Strange. He's a great looking figure with a lot of nice detail in his robes, particularly the decorative element on his tunic. 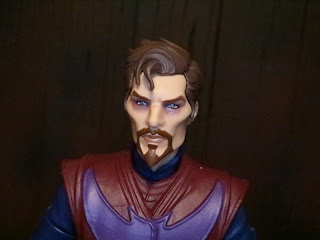 * This is a superb headsculpt that really captures the wan, pallid visage of Doctor Strange in his What If? appearances. He's been through a lot of trauma and done some dark things to try to increase his powers and this headsculpt shows off his torturous journey. 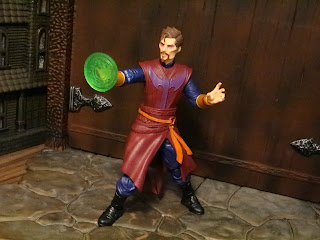 * While Doctor Strange's robes do impede his leg movement a bit that most important thing is that you can do a lot with his arms to show off his various chakras and magical spells. He's very nicely poseable and is really fun in hand. 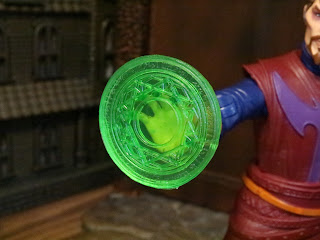 * You can pop out Strange's right hand to add on this magical effect which shows him using the powers of the Time Stone. It looks fantastic with lots of little details sculpted into the green plastic disc. 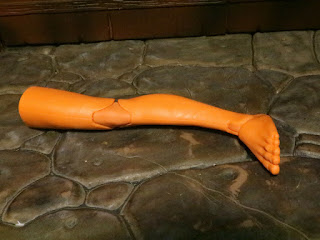 * Since this series features a build-a-figure of the Watcher you get a piece with Doctor Strange Supreme. He comes with the left leg. I'm not building this guy so I've been selling off the extra pieces but it seems like a pretty solid BAF. 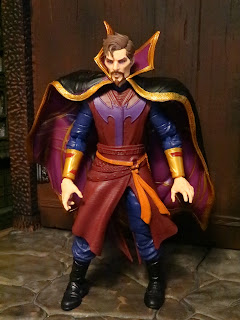 * Strange also comes with his cape which is different in What If? than in his movie appearances. It's not the levitating cloak but something more sinister looking. It plugs into his back and stays on fairly well. You'll have to futz with it a bit but it's nice with quite a few paint applications including some gold patterns on the inside. 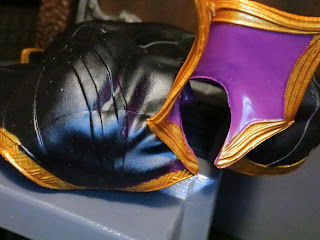 * The paint applications have some serious messy spots, though. The purple shows through on the outside and the gold stripes are really sloppy on the inside. 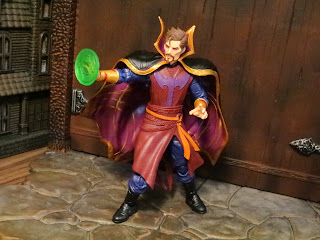 Doctor Strange Supreme is a pretty cool figure. There have been lots of movie based Doctor Strange figures (and there's another on shelves now for Spider-Man: No Way Home) but this one does offer something new. It would have been nice if he had come with a few more hands or some more magic effects, though, to give him more diverse options for posing. Still, I do like him. He's a Good and a 1/2 figure and definitely worth a look if you're a fan of Doctor Strange or of the Disney+ What If? series.