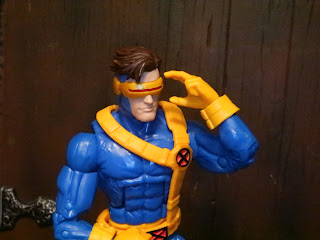 While my favorite era of X-Men story-wise is definitely Chris Claremont's run through the 1980s, costume wise I love the early 1990s designs. I was first introduced to X-Men through the Toy Biz action figure line and the 1992 animated series and these uniforms have always been some of my go to looks for these characters. I own a couple other Marvel Legends Cyclops figures (the jacketed version of this guy from the Love Triangle set and the second X-Factor outfit from the Retro Collection) but this one was the one I wanted most and I finally scored it in a trade. I loved the vintage Toy Biz version of this version of Scott as a kid and while this one looks great, it's definitely got a few problems. It's a few years old at this point, though, so it's likely Hasbro will be releasing a new version at some point in the future. Still, let's go ahead and take a look at this version of Cyclops from the 2017 Warlock Build-A-Figure series after the break... 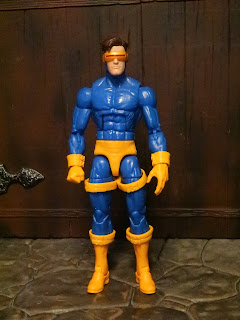 Accessories: Chest strap, 4 leg straps, and the left leg of the Warlock Build-a-Figure. 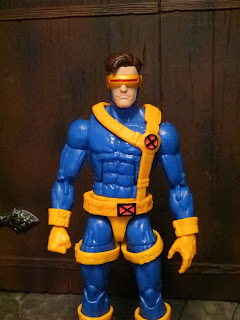 * Cyclops looks really good. Scott Summers' nickname is Slim for a reason and this figure definitely captures Cyke's slim, muscular build. He's not necessarily any taller than most Legends but this body fits him well. The colors are really striking, too. The Jim Lee designs from the early 90s make great use of bold colors and the blue and yellow used here are excellent. Cyclops' costume is striking without being over designed. It's sleek, simple, and very classic. 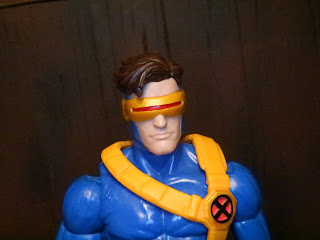 * The headsculpt is quite good, too. He's wearing his classic visor with no hood, so his stylish hair can blow free. The comics, particularly the earlier X-Men issues, always make a big deal about how serious Scott is and you can kind of see it in this portrait. Grim and serious yet determined and ready for action. 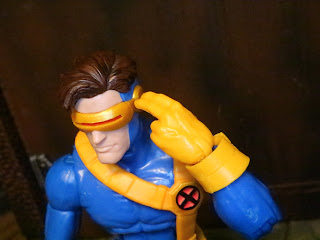 * One of the things that's really cool about the figure is that Hasbro gave Cyclops a unique hand sculpt for his left hand. It mimics him using the controls on the side of his visor to fire off an optic blast. It looks great and makes posing him even more fun. 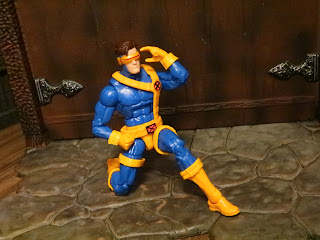 * Cyclops is a pretty standard Marvel Legend from 2017, so he's got the articulation you'd expect. Double jointed knees and elbows, swivel/hinge shoulders, hips, wrists, and ankles, and a solid range of movement on all of the joints. He's a sturdy, durable figure and for the most part you shouldn't have any trouble getting him into plenty of cool poses. 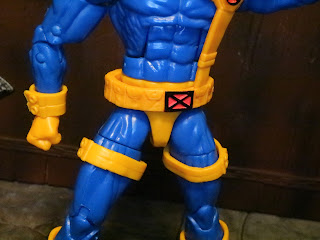 * Cyclops' outfit has lots of pouches and straps. Not so many to be ridiculous but enough for carrying a little bit of useful gear. The belt looks good and I love the simple red and black X logos.

* Remember that if you bought this at retail, or pick up a carded figure, you'd get the left leg of the Warlock Build-a-Figure. 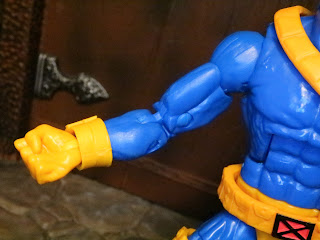 * OK, let's get to the problems here. First up, Cyclops has the rubber elbow joints of so many of the Hasbro figures from this period (many of the Black Series Stormtroopers and Clone Troopers had them, too). They just feel weird and gummy. Definitely inferior to many other figures and what we're getting now. 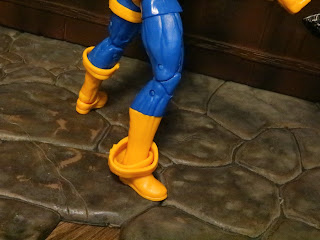 * The worst part about the figure, though, is the straps on Cyke's hips and boots. These things fall down like crazy. They don't stay in place when you're handling the figure and just really make a good, solid figure much less fun. Some legs with straps and some new boots would have really been preferable to what we got here. 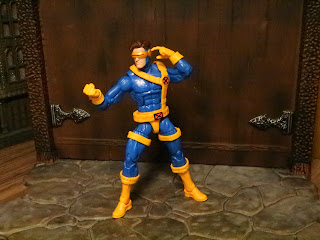 Cyclops looks awesome and Hasbro definitely did a fantastic job of capturing the character's classic early 1990s appearance but the issues with his leg straps falling all over the place and the gummy elbows makes him rather annoying if you're trying to pose him. He's a Good figure, which is average, but looking at how this guy turned and considering the prominence of Cyclops' character in the comics, you'd just hope for more. This is a flawed figure that manages to be salvaged by the quality of the headsculpt and the strength of the costume design. Odds are Cyclops will soon get a cel-shaded variant in the new X-Men Animated Series line with the VHS covers, but that will have the weird cel-shaded paint apps and a higher price point. Will that Cyclops have fixed legs? Hopefully at some point this guy will get a revisit as it's desperately needed.

This is the first figure of Cyclops I've reviewed on the site. For more Marvel Legends Series reviews check out the following: