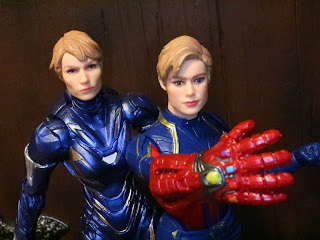 Most of the Marvel Legends figures I purchase are comic based figures. They just look better together, never really seem to get outdated, and there's a wider variety of characters offered. Still, when I see a figure or set I really like I still jump at it and this set definitely appealed to me. Hasbro's quite brilliant: A set of action figures with photo-real likenesses of Brie Larson and Gwyneth Paltrow? Instant buy! Since Endgame Hasbro has been going back and releasing figures from characters they missed out on during the first three phases of the Marvel Cinematic Universe and this is from the newest series of The Infinity Saga sets. Captain Marvel and Pepper Potts in her Rescue armor are both from their appearances during the final battle against Thanos in Endgame. Captain Marvel didn't get a figure wearing this outfit when the movie came out but Rescue was previously released on her own. This version of Rescue (which the packaging oddly calls "Rescue Armor" instead of just Rescue, or Pepper Potts, or Pepper Pots in Rescue Armor) does have some unmasked portraits and a more sophisticated backpack, though, so she's not just a straight repack. The set is an Amazon exclusive and is still available as I'm writing this. Ready to check out a new set of MCU heroes? Then join me after the break... 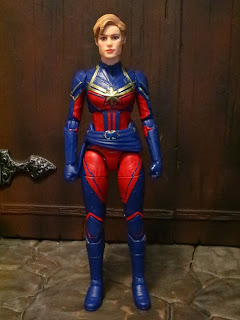 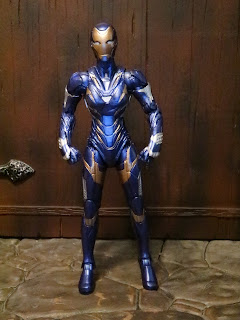 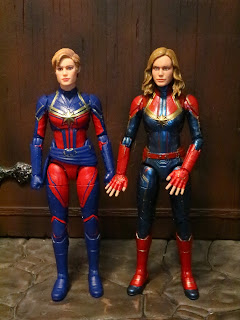 Comparison:
* Here's a quick look at the original Captain Marvel figure from the first film on the right with the Endgame Captain Marvel on the left. The likeness to Brie Larson's Carol Danvers is way better on the new figure. Most of the figure is the same although the Endgame figure has a new upper torso and the sash. 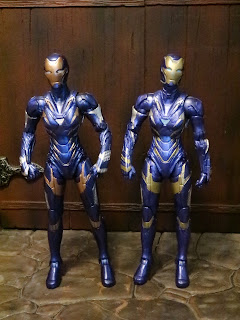 Comparison:
* The oddly named Rescue Armor from this set (on the left) is the same sculpt as the previously released Rescue from 2019 (on the right). The paintwork is slightly different and looks a bit more accurate on the newer figure. The bronze bits are a bit more striking and the eyes and reactor are white rather than light blue. 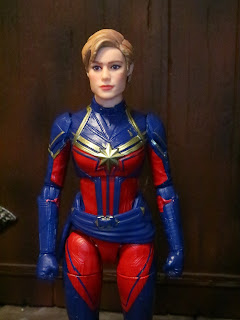 The Positives:
* Captain Marvel looks fantastic in this outfit. She wearing colors closer to the classic Mar-Vell outfit and the colors are just striking. The previous figure was really well sculpted (it only came out in 2019, after all) but the new upper torso piece just seems a bit bolder. I'm also loving the sash she wears around her waist. It's a great piece that really accents her costume well. 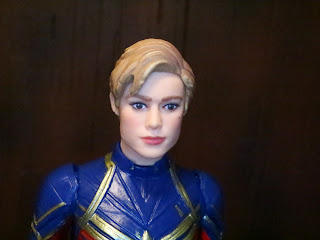 * The headsculpt is fantastic on this and I think the likeness to Brie Larson is spot on. The short hair is accurate to the film though it's still not how I'm used to seeing Brie Larson so it might make the likeness seem a bit off just because of that. Really look, though, and you can tell that Hasbro did an amazing job. The printing on her face is excellent with very like-like, expressive eyes. 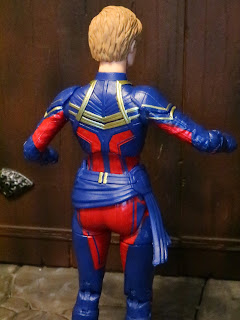 * The detail goes all the way around on the figure and the paintwork keeps up with the sculpt. While the comic based figures often just have printed outfits the MCU figures go out of their way to ensure that the details of the elaborate costumes are well represented. 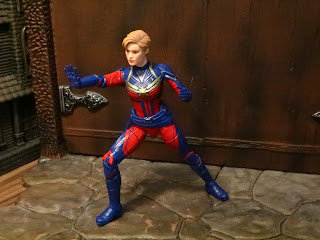 * Captain Marvel is a Hasbro Marvel Legends figure, so what does that mean? Excellent articulation and fantastic durability. Hasbro makes the best, most playable action figures hands down (and, c'mon, y'all know I'm a Masters of the Universe fan first and foremost but Mattel could learn from Hasbro) and Captain Marvel is another worthwhile release. 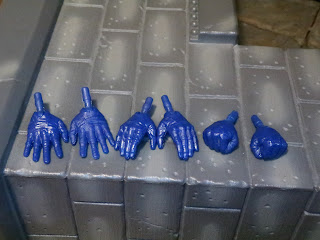 * Carol comes with six interchangeable hands for helping to obliterate Thanos and his minions. She's got some open palms, some relaxed grips, and some fists. They swap out easily and give you quite a few nice options for posing her. 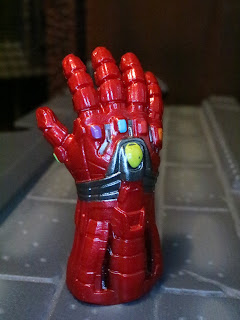 * I really like that Hasbro included the Iron Man Infinity Gauntlet. It's a cool accessory with great paint work. It's also hollow and if you remove Captain Marvel's right hand you can put it over her forearm. Create your own "What if?" scenario! 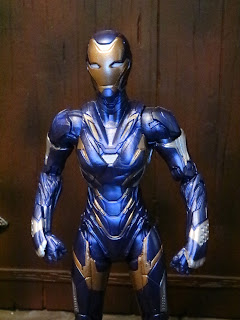 * Let's take a look at Pepper Potts in her Rescue armor. This is another 2019 sculpt so it's quite new. The armor is wonderfully detailed and I love the metallic blue paintwork. She's a seriously sharp looking figure with some excellent detail. 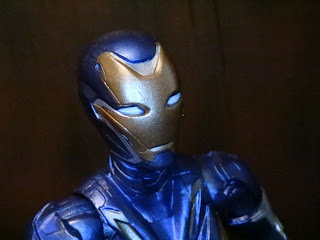 * The Rescue helmet is small and definitely more feminine than Iron Man's helmet but you can tell they're from the same source. I love the look of the glowing eyes. It's just paint but it looks very convincing. 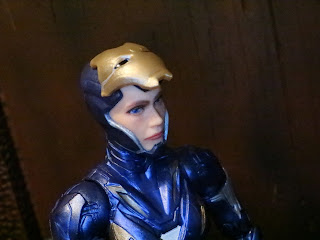 * The set comes with two all new heads which show off Pepper Potts. The first is Pepper with the faceplate raised up. It's a good sculpt with nice paitnwork and a cool way to display the figure. I'm not wild about the Gwyneth Paltrow likeness here but I'll get to that in a minute. 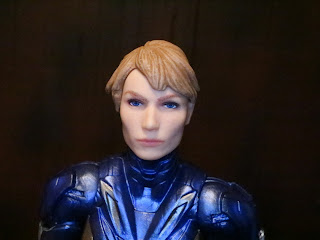 * Next up is the fully unmasked Pepper Potts head. It's a fantastic sculpt although it looks far more serious and stern than you usually see Pepper. Usually she seems very warm and smiling. Of course, she's also in the middle of a battle for the fate of the universe and possibly having just witnessed her husband's death, so it makes sense here. The eyes look excellent here. Hasbro's doing a great job with the photo-real eyes lately. 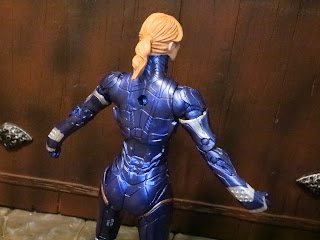 * The armor is detailed the whole way around the body with all of the panels and segmented parts you'd expect to see on one of Tony's suits. 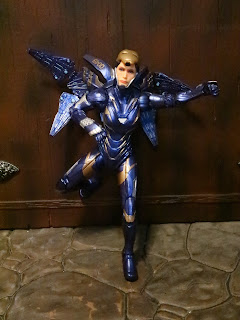 * Rescue also has fantastic articulation. She's as well articulated as any Iron Man figure I can think of and maybe even then some. To really get the most out of her you might want to track down a flight stand so you can use the thrusters that attach to her feet and really pose the drones on her back. 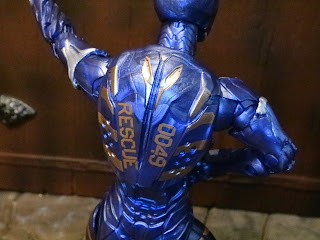 * Pepper comes with two backpacks (both of which are reused from the previous figure, though the paintwork is different). The first is a closed backpack with the wings/ flaps/ whatever folded in. 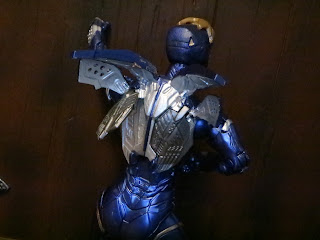 * The second backpack has all of the flaps and hinges open. The two smaller grey flaps in the middle even have hinge joints so you can pose them. 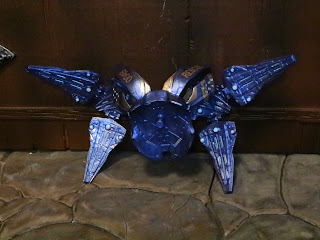 * There are two drone pieces that can attach onto the backpack as well. These are mounted to clear plastic rods which are hinged at the top and bottom. The wings of the drones are also hinged, so you can really set this thing up to look pretty dynamic in your display. They're new to this version of Rescue so that's kind of a cool extra. 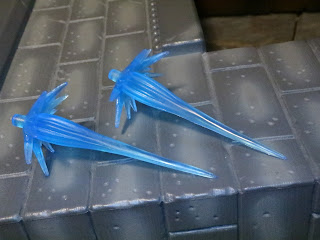 * Check out these repulsor blasts. Oddly the Rescue armor doesn't have open palms to attach them to but they can go on Pepper's feet to be utilized in flying poses. Like the other repulsor blasts we've seen the flares are removable from the blast if for some reason you wanted a narrower beam. 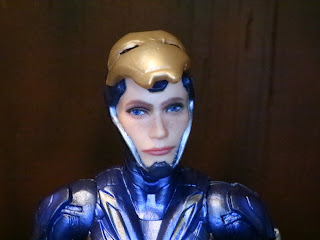 The Negatives:
* What do you think about the portrait with the flipped up visor? I think it looks a bit awkward, as if there's not really enough room in the helmet to hold Pepper's head. There's something odd about it, like this is a human face on a robot rather than someone looking out through a helmet. 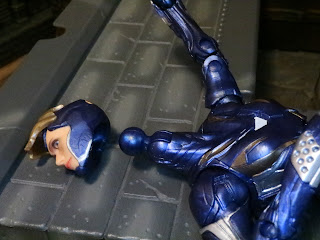 * I also had a real issue getting this head on the body. I had to work and work, eventually using a hairdryer to heat the head. After that it seemed to go on better but it was a challenge. 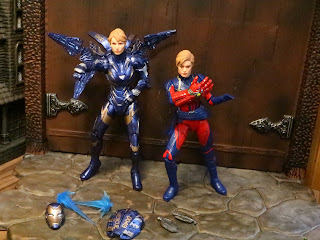 While Rescue is a repack and there's quite a bit of reuse in this set there still is a lot new here to love. You're getting two excellent figures, four headsculpts, most of which are pretty awesome, Rescue's complex backpack, and the Iron Man Infinity Gauntlet. While the set is given the premium pricing Hasbro is using for their The Infinity Saga line and Fan Channel exclusives the extras do help to make up for that. This is a Great and a 1/2 set and while I do like the Captain Marvel figure a bit more, Pepper Potts in her Rescue Armor is probably worth it, too. I'm sure MCU collectors will like having the extra unmasked head to customize a standard Pepper Potts.
If you're a fan of Carol Danvers/ Ms. Marvel/ Captan Marvel/ Warbird, I've reviewed a few other figures of her, including the Marvel Legends Series MCU Captain Marvel, the Marvel Legends Infinite Series Captain Marvel (Maidens of Might), the Ms. Marvel, Captain America, & Radioactive Man 3-Pack and the Toy Biz Marvel Legends Warbird.
This is the first figure of Pepper Potts/ Rescue I've reviewed. For more Marvel Legends Series figures check out the following:
Marvel Legends Series by Hasbro (2016)
Crossbones
Darkstar
Enchantress (Mystic Rivals)
Firestar
M.O.D.O.K.
Nico Minoru (Mystic Rivals)
The Punisher