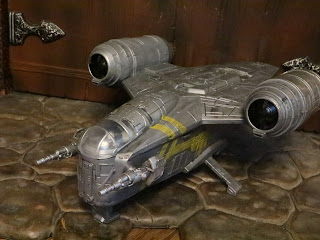 A couple weeks back I reviewed the Star Wars: Micro Galaxy Squadron Outland TIE Fighter and while I liked it, I wasn't really planning on picking up more of these at the moment. That being said, I definitely was eying the Razor Crest every time I saw it at the store. Like so many others, I absolutely love The Mandalorian and I'm a big fan of the ship (even though it's been destroyed) and this version struck a nice middle ground between being really nice looking and affordable. It also doesn't hurt that I found this for $9 bucks at a Bargain Hunt. If you're not familiar with Bargain Hunt, they're a retail store that sells the closeout or returned items of other retailers like Target and Walmart. The packaging on my Razor Crest was a bit beat up but everything was fine with it, so it probably got returned to a retailer and eventually was acquired by Bargain Hunt. Ready to take a look at Din Djarin's original ship? Then let's check this one out after the break... 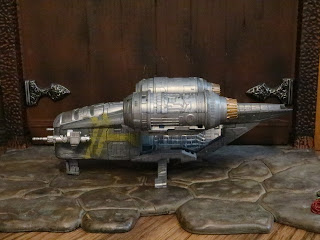 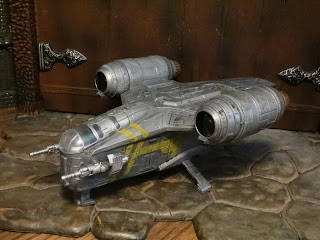 * The Razor Crest is a pretty decent sized ship and a wonderful model of Mando's ST-70 class Razor Crest M-111 Assault Ship. The sculpt and paintwork on Jazwares' rendition of the ship are both really impressive. There are lots of paint effects on the vessel and all of the details are beautifully highlighted. Holding this in hand or admiring it at a distance, I really could see this having been sold as a more expensive, higher end collectible. The detail is that good. 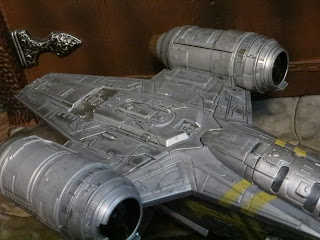 * Here's a glimpse at the top of the Razor Crest where you can see the dark wash and drybrush paint effects used to bring out all of the detail on the surface of the ship. 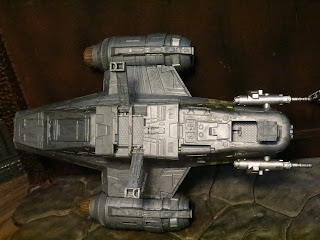 * Here's a shot of the underbelly of the ship where you can better see the landing gear that folds out to keep the ship upright when landed. 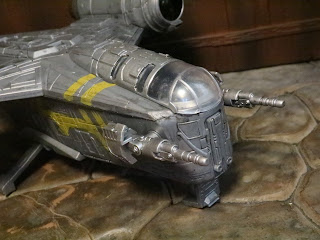 * The front of the ship and cockpit look great. I'm really digging those massive cannons on the front of the Razor Crest, too. Those heavy laser cannons can pack a serious punch. 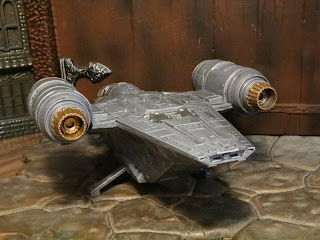 * And here's a shot of the ship from the rear, showing off the backs of the engines. 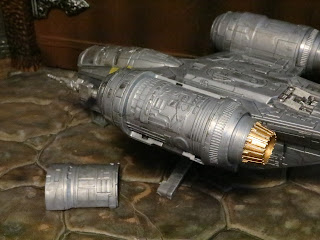 * The port engine has a removable panel, allowing you to look underneath and see some of the inner workings of the engine. 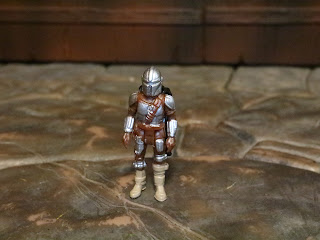 * The ship comes with three figures, the first first being Din Djarin. While every detail isn't painted, what is painted is pretty impressive for such a tiny figure and there's no doubt as to who this is supposed to be. 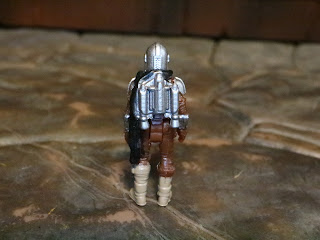 * Din Djarin's cape and jetpack are removable. They're one single piece but they can pop off so he can sit down and pilot the ship. 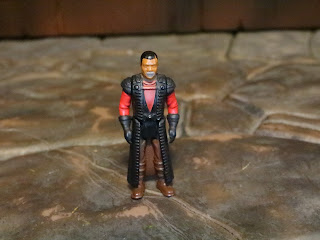 * The second figure is Greef Karga decked out in the cool outfit he wears in season 2 of The Mandalorian. This is another really solid sculpt with super clean paintwork, especially for such a small figure. Check out his beard! It's a lighter gray than his hair, just like on the show. That's one heck of a detail to include and get right. * The third figure is Grogu, AKA the Child, AKA the Asset, AKA Baby Yoda. Grogu is rally small and is permanently attached to his pram for safekeeping. The pram has a removable "hover" stand which gives off the illusion that Grogu is just hovering around and chilling out. 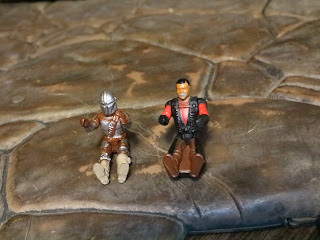 * Both Mando and Greef Karga have articulated hips and shoulders. Both arms and legs are on the same peg, so they swivel together. I didn't have any trouble with the articulation on these two; everything moved smoothly. 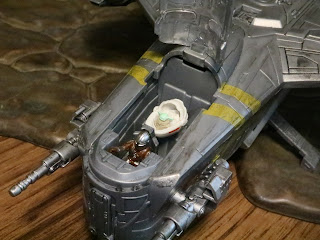 * The cockpit opens up and there is room for Mando in the pilot's seat. There's also a spot for Grogu behind him or two seats that you can put other figures in, though it will be a tight squeeze. 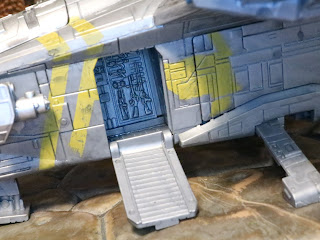 * The side ramp of the Razor Crest folds down to allow for entry. Right inside the door you can see Din Djarin's weapons rack overflowing with lots of gear for tackling the most dangerous of bounties. 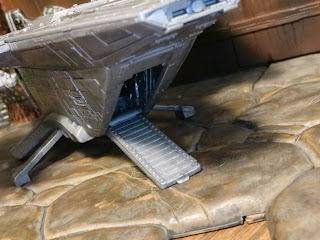 * The rear ramp folds down, too, so Mando can exit from the rear or the side. 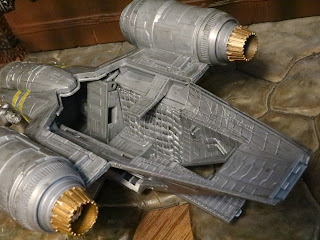 * To allow you to see inside of the ship there are two removable plates. The first is across the top of the ship. Popping this off gives a look inside the ship so you can see the cargo area and the carbon freezing chamber. The removable plates really remind me of some of the Micro Machines playsets, which is always a good thing. 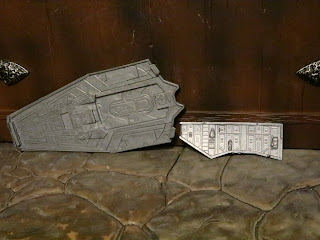 * The plates are fully detailed as well with some impressive detail on both sides. 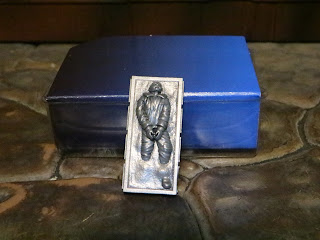 * Also includes is the Mythrol encased in carbonite. It's a hollow piece with no detail on the back but the front and sides look great. 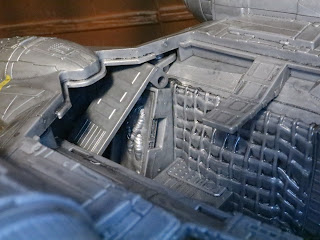 * See the little carbon freezing chamber? The lid is on a hinge an lifts up, allowing the carbonite slab to be stored inside. 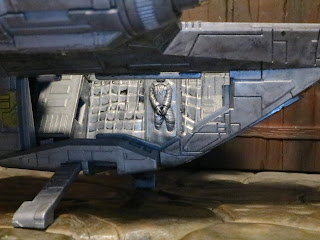 * Here's a few of the Razor Crest from the side that shows off the removable side panel. You can also see the Mythrol in carbonite hanging in the cargo area. There's a set of brackets that it can pop into, allowing it to be displayed in the ship. 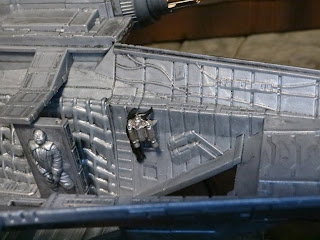 * And here's where you can store Din Djarin's jetpack when it's not in use. There's a simple hole that the jetpack peg can plug into. 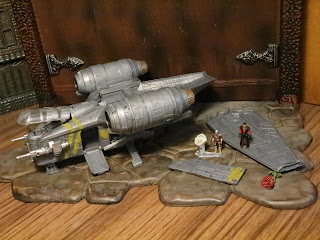 I am extremely impressed with the amount of detail and paint applications that Jazwares crammed into this version of the Razor Crest. While it's not a massive toy (though it's still decently sized for the price), there are lots of fun features that really do make me think back to the glory days of Galoob's Star Wars Micro Machines and Action Fleet line. This is definitely an Epic toy. There's also an Arvala-7 with dirty paint applications and paint applications designed to make the vehicle look like it has been stripped of parts by the Jawas. The figures are different as well (you get Mando, Kuiil, and an Offworld Jawa.

For more of Grogu/ the Child/ Baby Yoda, check out the Black Series Phase III The Child, the Phase IV Din Djarin (The Mandalorian) & the Child and Speeder Bike, Scout Trooper, and The Child, and the Retro Collection The Child.

If you're interested in more of Greef Karga I've also reviewed the Black Series Greef Karga and the Retro Collection Greef Karga.

This is the first version of the Razor Crest I've reviewed. For more Star Wars: Micro Galaxy Squadron reviews check out the following:
Outland TIE Fighter
Posted by Barbecue17 at 10/04/2022