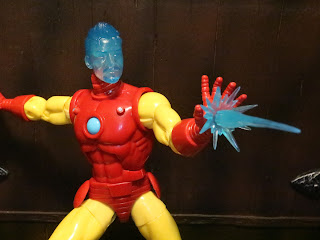 I've only purchased two figures from the recent Marvel Legends Shang-Chi/ Mr. Hyde series of figures: Civil Warrior, who I reviewed last month, and Tony Stark (A.I.), who I'm reviewing today. Yeah, yeah, Hasbro has put put out dozens of Iron Man figures (he has a series all his own coming this summer with an Ursa Major build-a-figure) but they're usually pretty good. This was a very cool, very classic looking comic styled Iron Man who has the benefit of also having a translucent blue head. I'm way more familiar with classic Marvel stuff than anything modern but apparently Captain Marvel punched Tony into a coma, leading to a sophisticated A.I. Tony to take over for awhile. That's all the basis Hasbro needed to take a previous Iron Man body, make a blue Tony Stark head, and call it a day. I like him, though, and since I've mostly been avoiding MCU based figures (mostly) this was one of the only two figures I wanted from this series. Let's take a look at Tony Star A.I. after the break... 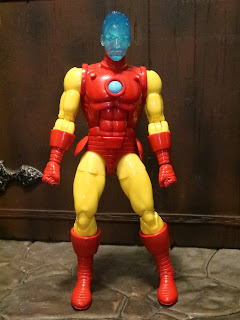 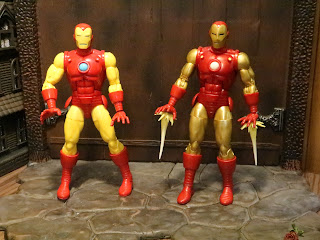 Comparison:
* Tony Stark (A.I.), on the left, is basically a repaint of the 80th Anniversary Iron Man figure, here on the right. The reuse works fine for the most part here and delivers a very classic looking comic Iron Man if you put on the helmeted head. 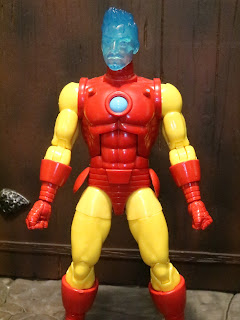 * Those bright, classic colors really are the main draw here. Iron Man looks fantastic in red and yellow. The body is clearly armored, but in an old school way and not in the modern looking way that the movie showed off Iron Man armor. That seems a bit odd for a figure based on a very recent comic book but I have to admit that it was the classic looking armor that sold me. Tony's arc reactor is blue here as are the two little protrusions on his upper chest. The colors are all bright and look pretty impressive and eye-catching. 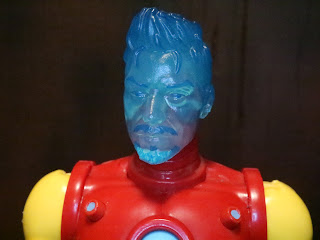 * The main head for this figure is the A.I. Tony Stark head. It's a modern looking depiction of Tony and not just a recast of the Alex Ross inspired 80th anniversary figure's Tony Stark headsculpt. I'm surprised this wasn't repainted for inclusion on a figure in the upcoming Ursa Major series! The head translucent blue, yeah, but there are some darker paint apps on the facial hair, eyebrows, eyes, and hair. It looks really good and definitely sells the effect of being a holographic projection. 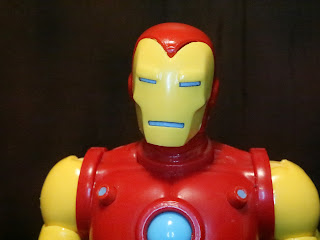 * If you want a straight up Iron Man figure then Hasbro has you covered: There is a very classic Iron Man head, albeit with blue glowing lights inside. It's actually pretty cool looking and makes for a fun extra. 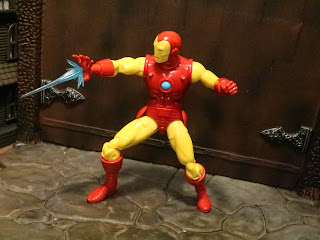 * The articulation is excellent and this is an incredibly fun figure to pose and play around with. It's solid, durable, and loaded with useful articulation. I'm not really sure that any company makes durable and well articulated action figures better than Hasbro right now. With Marvel Legends, G.I. Joe: Classified Series, and Star Wars: The Black Series, they're at the top of the game. 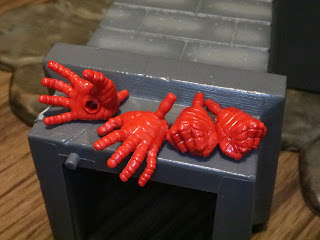 * Tony Stark comes with two sets of hands: Standard fists (with hinged wrists) and open palms that can hold the included repulsor blasts. They swap easily and give you some nice options when displaying your figure. 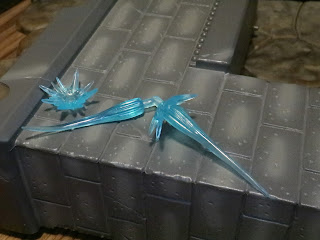 * These energy blasts have with quite a few figures so they're nothing new to most Marvel Legends collectors. Each blast is made from two pieces: A straight beam and a flare that fits over the peg at the bottom of the beam. They can fit on the bottom of Iron Man's boots for flying or placed in the holes on his palms for blasting bad guys. 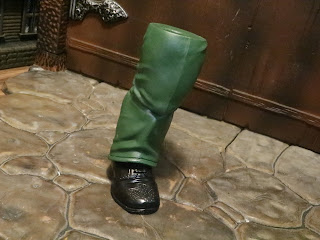 * The Build-a-Figure for this series is Mr. Hyde, a character I'm not too familiar with in the Marvel Universe. Tony Stark (A.I.) comes with his right leg. 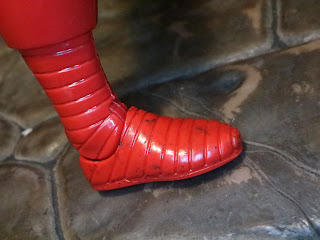 * What is going on with Iron Man's right boot? There's no other paint effects on this figure but his boot has some odd brownish-black spots on it! I'm guessing something dirty got mixed in with the plastic or something here. Yuck. 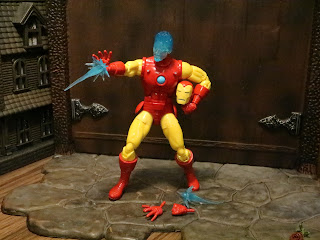 Is Tony Stark (A.I.) a weird inclusion in the Shang-Chi series? Yeah, kind of. He's not movie based nor is he even tangentially related to Shang-Chi. He really feels like a figure that should have been part of the upcoming Iron Man series of figures as he even mentors Riri Williams/ Ironheart, who is included in the set, too. He's still a Great figure, though, and while the figure is mostly reused parts, the colors are excellent and it's just a fun figure overall. I don't double up on too many Marvel characters unless there's a significant variation but it's tough to say no to new Iron Man figures. This one seems to be flying off the shelves so other people must like it, too.

Looking for more figures of Iron Man? The check out my reviews of the Marvel Legends' Classic Iron Man and Heroic Age Iron Man.