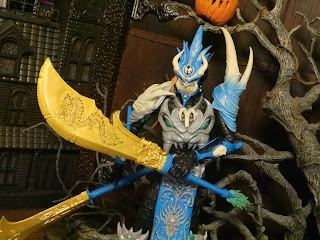 It's time for another day of Toy Terror during and today brings another visit from Spawn for the festivities! This time we're checking out the Gold Label edition of Mandarin Spawn from McFarlane Toys' Spawn revival line. I loved Mandarin Spawn when I picked up the original figure back when I was in high school and the modern deluxe version was my first figure from the newer Spawn line. This version was exclusive to Walmart in 2021 but now you can order it from a number of e-tailers at a pretty decent price. I think I paid less than $10 for mine back in May 2022. It's weird why this guy kind of sat on shelves as he's a pretty sweet figure. Mandarin Spawn is Chenglei, better known as the Scarlet Edge. This guy isn't just a repaint of the other Mandarin Spawn figures, though; he actually has lots of unique parts to him. Let's take a look at the Gold Label Mandarin Spawn after the break... 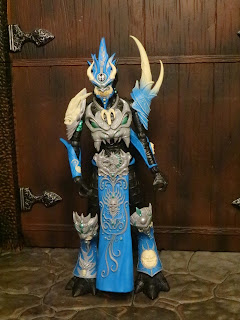 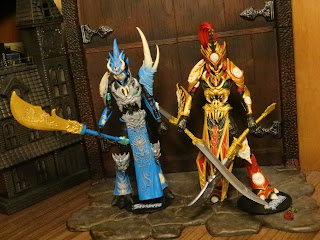 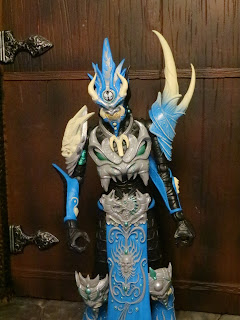 * The original Mandarin Spawn is still one of the most elaborately decorated action figures I've ever seen and this newer version follows in that tradition, though there's not as much unqiue paintwork here. Of the three different versions of Mandarin Spawn released in 2021, this one is in the middle in terms of paint deco. McFarlane has upped the quality of their plastic in recent years and while it's softer and less brittle, the details are a bit softer and different than on older releases. Not worse, just different. This is also a fully articulated figure and not just a statue with a few points of articulation. The armor is incredible and does an amazing job of mixing a very fantastical Chinese styled armor (Mandarin Spawn hails from the Song/Sung Dynasty of 960-1279) with some Spawn-like elements. The paintwork is neat and cleanly applied without the intentionally over dry brushed look of many earlier McFarlane toys. The color choice is awesome and really makes this guy stand out. 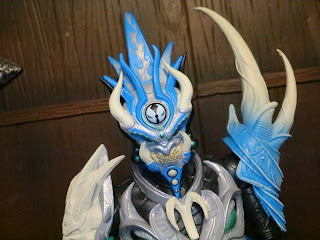 * This version of Mandarin Spawn has a unique face mask/ headsculpt that is pretty cool. The face is rather ornate with lots of sharp teeth, horns, and lots of protrusions and neatly painted details. He also has Spawn logo right in the middle of his forehead just for fun. 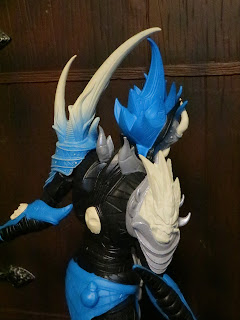 * Mandarin Spawn's right shoulder has a creepy face on it while his left pauldron is a massive pair of spikes. It looks pretty cool with some nice paint effects to bring out the detail. 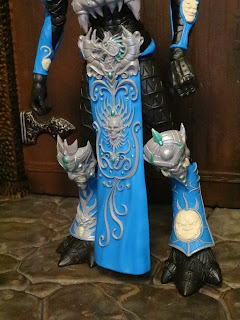 * Besides having really cool legs with some wild looking hooves and knee pads, this Mandarin Spawn has a waist cloth that's unique to him. It's pretty elaborate, too, with a dragon at the waist, an ornate skull adorned crest, and lots of swirly designs. These are all sculpted elements with paint applications, too, so it's a pretty nice, deluxe feeling detail. 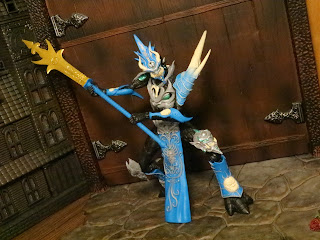 * One of the biggest changes of the new Spawn figures is that the articulation is really good. Each figure is built very uniquely and seems to have their own articulation model. The plastic has a really good feel to it and doesn't feel at all brittle or flimsy. I'm not sure I love the way that McFarlane is doing swivel/hinge joints but everything else is excellent and for the most part nicely blends in with the armor. Looking at this figure you might not even think that it would have articulation at first. He's really fun to mess around with, especially given the two oversized weapons he comes packed with. 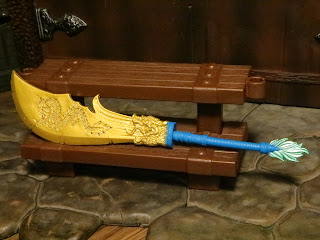 * I believe that this is a guandao and while they usually tend to be a polearm with longer reach, this one is designed a bit shorter. The blade is incredible here and is gold with a blue hilt rather than the silver blade and gold hilt of the deluxe version. That dragon etched into the blade is just breathtaking as is the lion as the base of the blade. I like how the flare at the bottom also got a cool metallic paint hit. 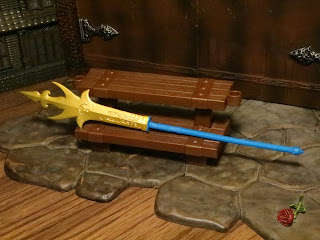 * The second weapon seems to be a fangtian ji, a halberd from the Song/Sung dynasty. It's quite long with an extremely long blade that's rather intricately designed. There's even a Spawn logo etches into the blade along with more dragons near the hilt. The gold blade with a blue pole is a rather unique looking color combination for a weapon, especially for Spawn, but I love the overall look. 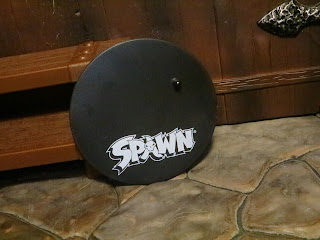 * Mandarin Spawn comes with the same basic disc stand as the rest of the figures in the line. 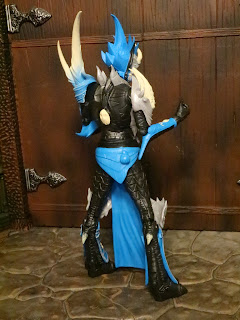 * I love the color scheme on the Gold Label edition of Mandarin Spawn but there are definitely some areas where more paint was needed. The back of the figure is particularly weak and seems like a few more paint applications should have been added to make the figure feel truly finished. 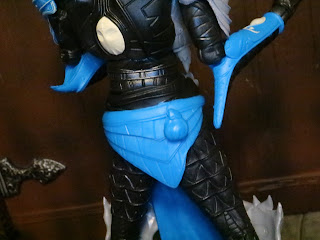 * I'm also really appalled, probably more so than I should be, that the pouch on Mandarin Spawn's belt isn't painted. this is supposed to be a separate detail and to leave it unpainted feels wildly out of line for McFarlane Toys. 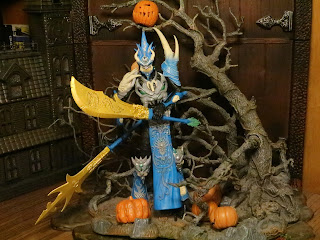 I really do like this figure but it definitely feels like it needed a few more paint details, especially on the rear of the figure. It's still pretty fantastic looking, especially due to the sculpting on the armor and the superb detail on the head/ helmet. The weapons are also really cool and go nicely with Spawn's blue armor here. This guy gets a Great from me. He's definitely a cut above most figures on the toy shelves these days and he'll surely stand out in your Spawn collection because of that cool color scheme. Not a lot of blue Spawn figures out there.

For more modern Spawn reviews check out the following: