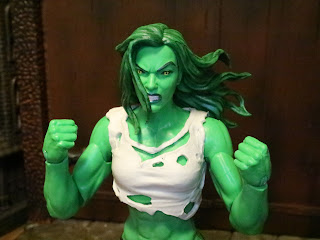 Who's ready for She-Hulk? She-Hulk has been part of the Marvel Universe since 1980 and next year she's going to make her MCU debut in the Disney+ show She-Hulk. Tatiana Maslany will be starring as Jennifer Walters and we know that Mark Ruffalo and Tim Roth will return to the MCU as well, so expect She-Hulk to be pretty popular next year. I didn't purchase this figure just because She-Hulk is coming to the MCU but it is pretty exciting nonetheless. In early 2020 Hasbro released a gray version of She-Hulk (who was just called Hulk because of something from Civil War II that I'm not going to even pretend to understand) and this version uses the same sculpt but her skin is green, a far more recognizable look for her. She-Hulk is a Fan Channel exclusive so you'll find her at e-tailers and places like GameStop and Hasbro Pulse rather than your traditional retail stores. Ready to take a look at She-Hulk? Then join me after the break... 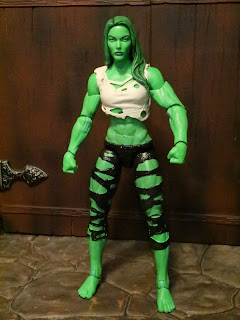 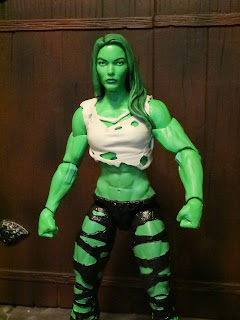 The Positives:
* I'm used to seeing She-Hulk in her purple and white outfit (like the version that came with the A-Force set) but this version definitely looks a bit less "superhero" and a bit more "street brawler." She-Hulk is cast in a fantastic shade of green that just catches your eye and which is incredibly photogenic. She has some nicely sculpted muscle details and basic clothes that are ripped and tattered, sort of like her cousin Bruce's classic purple pants. Jennifer's shirt is stretched and torn with lots of rips. it's actually a separate piece that's permanently over her torso which gives her outfit a cool, three-dimensional feel. 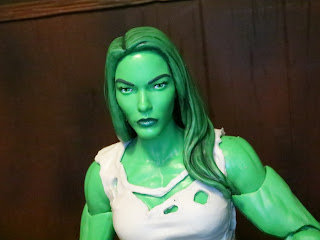 * She-Hulk has two portraits, the first of which shows Jennifer Walters with a fairly calm, neutral expression on her face. She's more in control of her Hulkness than Bruce typically so this seems more natural for her. It's not as expressive as I would have hoped for, especially considering She-Hulk was cracking jokes and breaking the fourth wall before Deadpool was, but it's a solid headsculpt with some nice drybrushing on the hair. 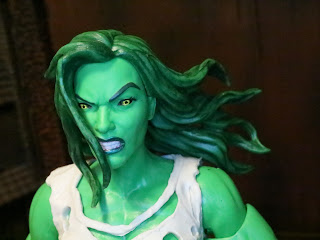 * The second headsculpt shows She-Hulk in a rage and it's definitely the preferable of the two headsculpts in my book. She looks like she's absolutely getting ready to tear someone limb from limb. Her eyes are awesome and I love how her hair is sculpted blowing to the side. This headsculpt definitely fits with the look of this figure best. 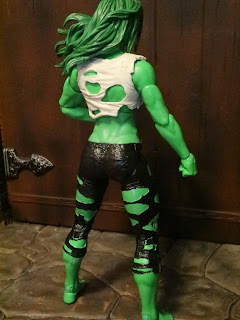 * Here's a shot that shows off the rips in the back of She-Hulk's shirt and the rips in her jeans. The work here to make her outfit looks shredded it just fantastic. 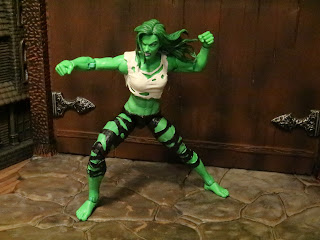 * She-Hulk's articulation is excellent, too. She's well articulated with a great range of motion in her joints. With her raging expression and some very expressive hands She-Hulk is just a really fun figure to pose and mess around with. 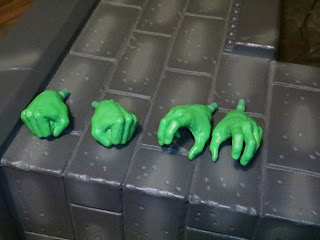 * She-Hulk has two sets of hands: Fists for clobbering and grasping hands for picking up mooks and throwing them against walls. They swap out easily and help to give you some options for posing her. 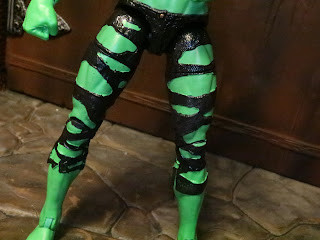 The Negatives:
* The sculpting on She-Hulk's ripped jeans is really good but the paint work doesn't quite match the sculpting. It's a bit messy in places. You probably won't notice it at a glance but take a gander and you'll see some messiness here. 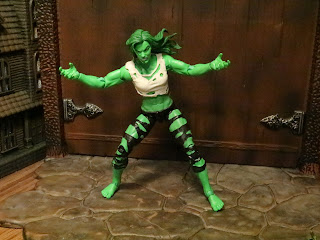 I really like She-Hulk. She was a smart repaint for a Fan Channel exclusive and definitely a fun toy. Considering the fact that she is a Fan Channel exclusive, however, be prepared to pay a bit more for her. I wish she had another set or hands or so and maybe another item to go along with her or a third, more expressive portrait. She's a Good and a 1/2 figure and definitely worth considering if you don't yet have a She-Hulk. You know when her show debuts next year everyone is going to be wanting this figure so jump in and pick her up now! You'll save yourself some heartache in the future.
This is the first figure of She-Hulk/ Jennifer Walters I've reviewed. For more Marvel Legends Series reviews check out the following:
Marvel Legends Series by Hasbro (2016)
Crossbones
Darkstar
Enchantress (Mystic Rivals)
Firestar
M.O.D.O.K.
Nico Minoru (Mystic Rivals)
The Punisher