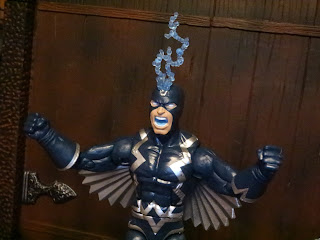 There might be spoilers for Doctor Strange in the Multiverse of Madness in this review!
So... Black Bolt made his MCU debut, huh? I actually haven't watched the Inhumans show but I was still excited to see the character make an appearance in a very classic looking outfit as part of the Illuminati in Doctor Strange: Strange Harder. Also, of all of the chaos that Wanda caused, I'm pretty sure Black Bolt's untimely end is the most memorable. I mean... sheesh! Like many others who skipped out on this figure previously, I quickly went back and picked this guy up from one of my favorite retro toy shops, Back in Time Collectibles in Gastonia, NC. Black Bolt was originally released in the Okoye Build-a-Figure series which contained the first set of figures released for the Black Panther movie and a few comic based figures as well. At the time I kind of remember Black Bolt being a bit of a pegwarmer. Will his cameo in Doctor Strange: The Strangening be enough to get Blackagar Boltagon and the Inhumans back in the spotlight? Who knows? Let's take a look at this nearly five year old Marvel Legends figure after the break... 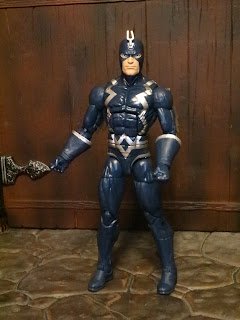 Accessories: Two interchangeable portraits, and the right leg for the Build-a-Figure Okoye. 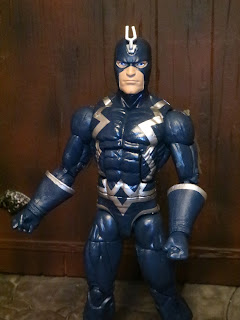 The Positives:
* Overall, Black Bolt uses a fairly basic body molded in dark blue. Err, maybe that's really supposed to be black, but it shows up blue like in comics? It's definitely dark blue on the figure, though, with some slick silver highlights to add some pizazz. He's also sporting some larger gloves rather than standard wrists. 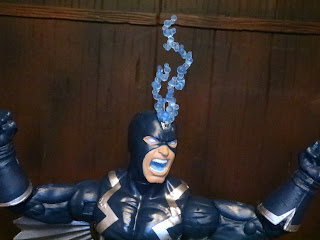 * Black Bolt comes with two portraits with the more exciting one showing off the powers he acquired from being affected by the Terrigen Mist. Black Bolt is letting out one of his screams with energy being concentrated on the tuning fork atop his head. Not only is his portrait pretty cool (I'm digging the whited out eyes and blue mouth) but he also has visible energy collecting on the tuning fork. It's a really neat look. 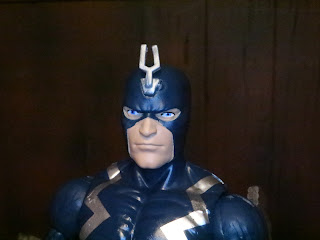 * Black Bolt's second portrait is a basic, neutral look that's best for most other scenarios when he's not trying to destroy everything in front of him. Since this is an almost 5 year old figure, there is no head with his mouth sealed shut. Ooohh, that was rough, wasn't it? Not bloody or anything, but still just horrifying and disturbing. 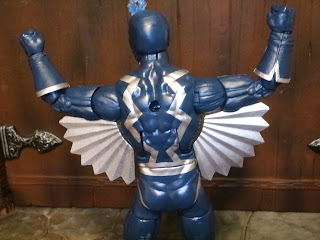 * Black Bolt's wings are attached to his biceps so they can be posed like show to the left or placed behind the figure for a more neutral stance. They're actually fairly well designed and definitely make this a more interesting figure. 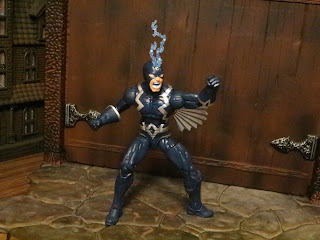 * The articulation is exactly what you'd expect from most modern Marvel Legends: Solid joints, lots of movement, and a sturdy, durable figure you can really pose and play with. He's actually quite fun to mess around with, due in large part to the screaming headsculpt. 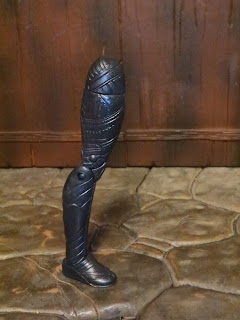 * This series of figures was largely focused on Black Panther and the Build-a-Figure was Okoye from the film. Black Bolt includes the right leg for Okoye. If anyone still needs this one let me know. I'm not planning to build her. 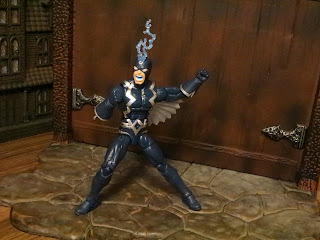 Black Bolt doesn't come with a lot of extras but his two headsculpts are nice and his wings definitely help him stand out a bit on the shelf. He's a pretty solid figure that definitely gets a Great rating from me. Who knows when Hasbro will revisit Black Bolt again, so this might be the figure to snag if you want to add him to your collection. While I was out picking him up I also grabbed Medusa so he'd have someone to hang around with. I'll probably be checking her out in the next few days, so stay tuned!
This is the first figure of Black Bolt I've reviewed on the site. For more Marvel Legends Series reviews check out the following:
Marvel Legends Series by Hasbro (2016)
Binary
Crossbones
Darkstar
D'Spayre
Enchantress (Mystic Rivals)
Firestar
M.O.D.O.K.
Nico Minoru (Mystic Rivals)
Ultron
Ursa Major
Marvel Legends Series: Avengers by Hasbro
Taskmaster