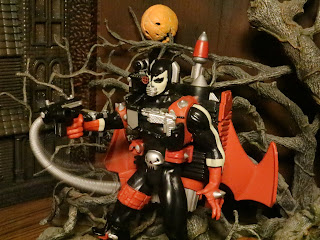 What's that flying through the cold night air? A witch on her broom? Nope. A banshee?  Nope. The Mothman? Nope. It's Spawn wearing a jetpack. Pilot Spawn was part of the second series of Spawn figures from 1995 and was one of the two Spawn variants in that series (the other was Commando Spawn). In the earlier Spawn comics at least, Al Simmons often relied on his military background and training when going up against heavy hitters, so it wasn't uncommon to see him whipping out some massive firearms and heavy ordinance. I guess it's possible he might put on an experimental jetpack, too. The early Spawn line was targeted at the then newly burgeoning collectors market and kids alike, so you got a mixture of designs to appeal to both. This one's kind of cool and I picked him up in the late spring at Retro Toys and Collectibles in Cherryville, NC in preparation for this year's festivities. Ready to take off with Pilot Spawn? Then join me after the break... 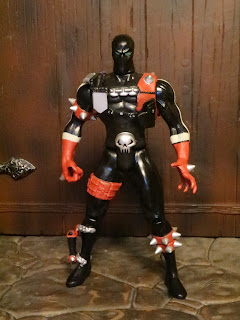 * Pilot Spawn looks kind of weird without his jetpack. It's unusual seeing Spawn in so much black without the white and red breaking up the middle of his torso. It's a unique look for him that definitely leans more into Al Simmons' tactical background. There's lots of traditional Spawn flourishes still, though, like the skull belt buckle, lots of red spiked bands, and a chain across his chest. He's very sleek looking for sure. 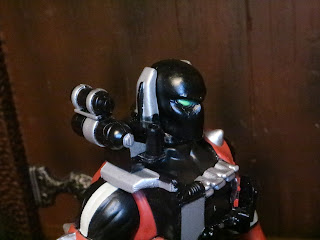 * Spawn has a very basic all black head with glowing green eyes. His gear is augmented with a headpiece that possibly includes communications gear and various scopes and targeting devices. Perhaps he's connected to Terry Fitzgerald here and getting ready to go after one of Jason Wynn's secret and nefarious projects? 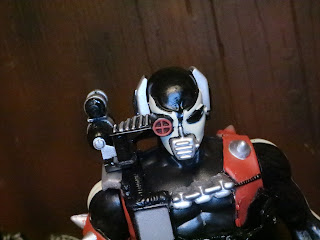 * There's a removable mask that makes him look more like the classic Spawn we all know and love. It does have a targeting reticle over the right eye and a mask that extends over Spawn's nose and mouth. Perhaps it has a built in microphone or a breathing mask. Wait, does Spawn need to breathe? He has internal organs but it's mentioned that he doesn't really need them, so... maybe? Anyways, the mask is attached to a pivot and can swing on and off to the right hand side. 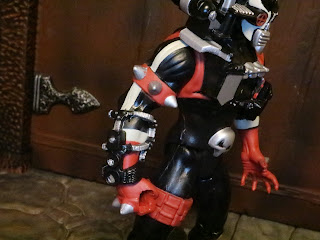 * Spawn's got lots of spiky things on his body and some cool armor on his right arm. It looks like these might be various gauges he could need to refer to during air operations. 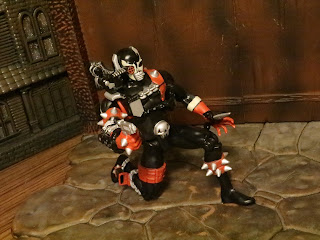 * In 1995, articulation was a little bit sporadic and most toylines simply features cut/ swivel joints. There were more articulated figures at the time (Ronin Warriors, some Power Rangers) but overall this version of Spawn is another figure that's very representative of the era. He has the standard five joints but also hinged knees. These were clearly built to both look good on display and to entertain kids just playing with them in a more traditional way rather than posing them in all sorts of crazy ways. Pilot Spawn feels pretty sturdy and is fun to mess around with. 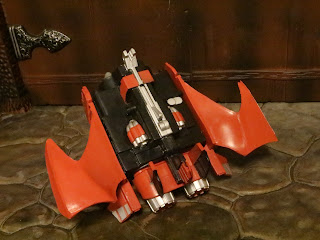 * Spawn's jetpack is massive compared to the figure. It's about the size of some of those deluxe backpacks from the 1996 Kenner deluxe Star Wars figures, but Pilot Spawn was sold at a standard price. This is a cool looking piece with the traditional Spawn colors on it and some neat details. It attaches to Pilot Spawn's waist and stays connected quite securely. 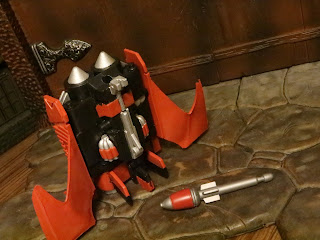 * There's a missile on the top of the jetpack that fires. It's a cool looking missile and the firepower is pretty decent; just stick it in the port on top and push the little silver notch on top. 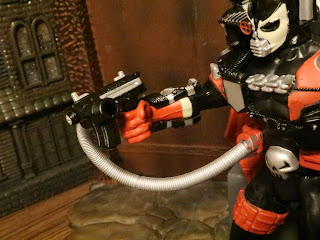 * To control his jetpack Pilot Spawn has a unique combination pistol and control stick. It's attached to his harness via a flexible cord and features a banana magazine on the bottom. Interesting design. 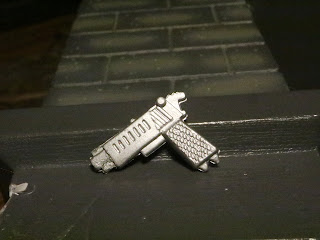 * Spawn also comes with a smaller pistol. It's definitely stylized but it seems more "realistic" and like something you'd see as a traditional military sidearm. 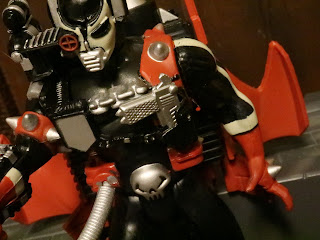 * The silver pistol fits into a functional holster on Spawn's chest where it stays quite securely. 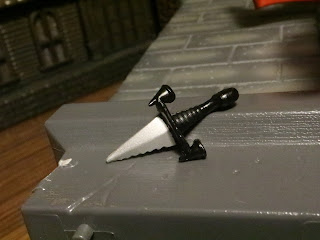 * Last up, Spawn has a nifty little dagger. One side of the blade is serrated and it has a really funky handle and hand guard. 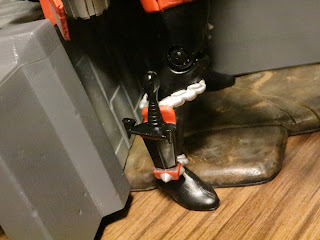 * The dagger fits into the small sheathe on Pilot Spawn's right ankle. 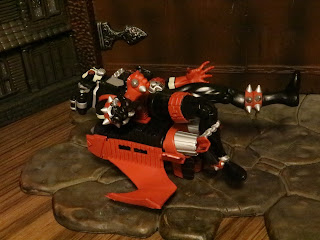 * The jetpack is really cool looking but it's also quite heavy. Unless you'd got Pilot Spawn leaned up against something, he's probably going to tip backwards. Bummer. 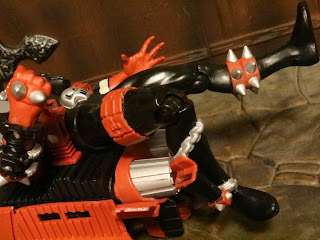 * My Pilot Spawn also has a really loose right knee which makes keeping him standing even more difficult. 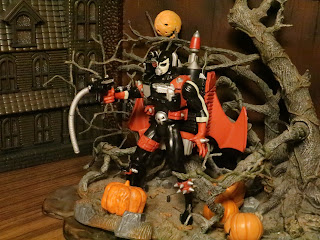 Consider that he came out in 1995, I still find Pilot Spawn pretty impressive. He's a Great and a 1/2 figure with some very cool gear and a pretty neat outfit. Like Batman, Spawn is a superhero who has been interpreted in multiple ways in different toylines throughout the years, and Spawn pretty much always looks cool no matter how he's re-envisioned. Pilot Spawn was a pretty neat figure when it came out and still has some cool concepts like the functional holster and sheathe, a massive jetpack, and the movable targeting mask. If you dig classic Spawn toys, this one isn't a bad pickup at all.