Action Figure Review: Heist Nebula from Marvel Legends Series: What If? by Hasbro 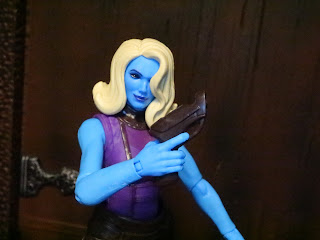 Ready for another Marvel Legends review in this mini marathon? My second pick up from this series was the What If? inspired Heist Nebula from the episode "What if? ...T'Challa became a Star-Lord?" Why is she called Heist Nebula? I'm assuming it's a reference to the plot to steal the Embers of Genesis from the Collector, Taneleer Tivan. It's kind of a weird name for the figure, especially since Hasbro hasn't released a Nebula figure since 2017 as far as I'm aware, so it's not like it'd be confusing due to having multiple figures of the character on the shelf. Anyways, I picked this figure up for a couple reason. One, it's a figure based on a Karen Gillan character, so there's that. Number two, though, I think she makes a decent comic based Nebula for my shelf. No, she doesn't look exactly like any of the comic versions of Nebula but the style of the figure really does blend nicely with the standard comic based Marvel Legends figures, more so than the excellent MCU version from 2017. Is she worth picking up? Let's take a look and find out after the break... 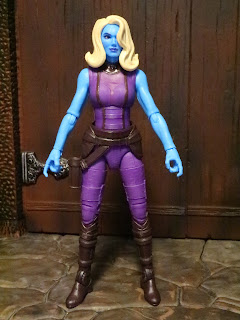 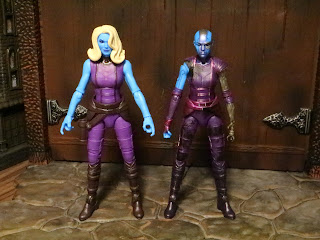 Comparison:
* Heist Nebula is on the left while the 2017 Guardians of the Galaxy vol.2 Nebula is on the right. The characters look fairly different but they do share the same lower body and lower torso. it makes sense since Nebula's costume in What If? is pretty similar to her MCU outfit, but the colors are brighter and a bit simpler, befitting What If's? animated style. 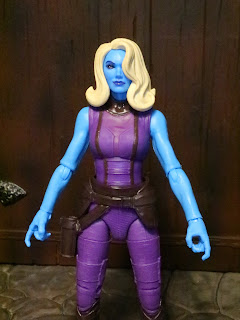 The Positives:
* I love the purple of Nebua's outfit and how it looks against her blue skin. It's an impressive looking figure! The costume is nicely detailed although the simpler paint apps of this version, matching the What If? animation style, don't highlight those details as much. She looks fantastic, though, and really pops out on your shelf in the same way that the other classic, brightly colored Legends figures do. 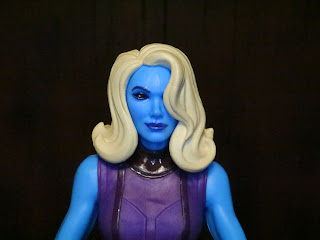 * In What If? Nebula actually seems to have a semi-healthy relationship with Thanos (who isn't too bad of a guy) and thus she hasn't been experimented on much. She does have some cybernetic implants but those aren't visible here as they're hidden under her hair. Heist Nebula has yellowish-blonde shoulder length hair and a more pleasant, less ready to kill you at the drop of a hat, facial expression. 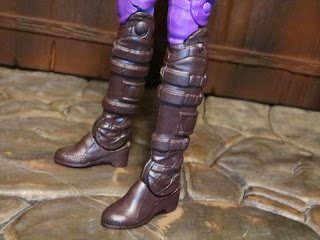 * Her boots are really cool. They're the same boots as the previous Nebula figure had but they're still really detailed with lots of buckles and such. I wish I loved in a world where it was socially acceptable to wear space boots and such everywhere. 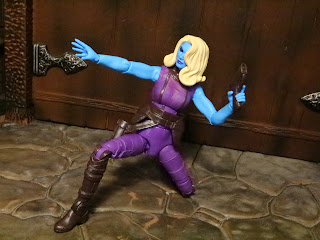 * I sometimes get tired of talking about the articulation on Marvel Legends figures because it's always so good and pretty consistent. She doesn't have some of the newer joints but everything she has works and you'll have no problem getting her into most poses you could want. Hasbro makes great figures that are durable and suitable for fooling around with that you don't have to worry about breaking. 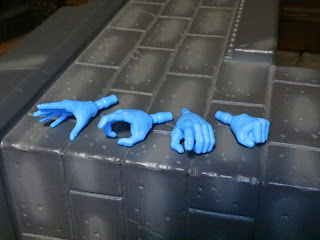 * Heist Nebula has four interchangeable hands: A gesturing right hand, two pistol grip hands, and a left handed fist. They swap out easily and give you some nice options for posing her. 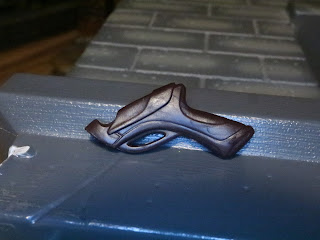 * I really like this little snub-nosed laser pistol Nebula carries. It's a cool little piece that seems like it's made for close encounters. 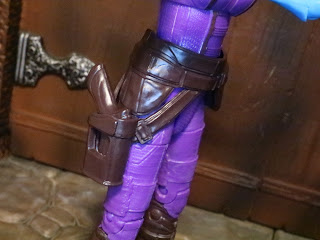 * When she'd rather be kicking you than blasting you Nebula can store her blaster in the holster on her right hip. It fits in there well and looks fabulous. Way to go! 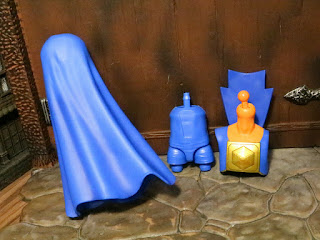 * Nebula comes with four pieces for the Uatu the Watcher build-a-figure. She has the robe, the waist/ lower torso, the upper torso, and the cape that extends up behind his head (which I have attached in this picture). I'm not planning on building Uatu (I've already sold off the pieces) but it's kind of crazy how much of him Nebula comes with. 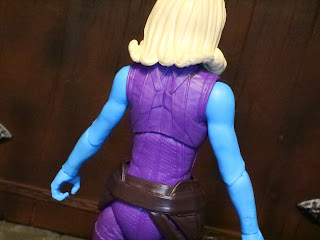 * The back of the figure has a lot of detail but almost no paintwork. It would have been nice to have a couple of the straps painted. 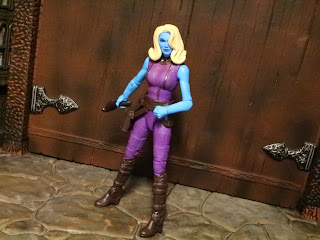 Heist Nebula really impressed me. Yes, she reuses a lot of the previous figure, but it works and the color scheme and cool blaster pistol are just really appealing. She's a fun figure and since we haven't seen Nebula over and over in action figure form it's nice to get another version of her. While I'd love to get a true comic version of Nebula some day in the future I'm very happy to have this one on the shelf for now. She's gets a Great and a 1/2 from me and so far is my favorite of the three What If? figures I've picked up. I originally only wanted Captain Carter and Heist Nebula from this series but I ended up picking up one more when I saw it in person. Who is it? Check back soon!