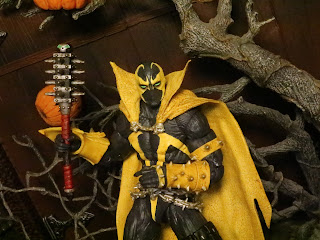 Look! Even Spawn's getting in the Halloween spirit! Oh, wait. That's yellow and black; not orange and back. Eh, close enough.

OK, so yeah, this version of Spawn is subtitled "Curse of Apocalypse" since that's the name of this costume from Mortal Kombat. McFarlane Toys has been making Mortal Kombat figures since 2019 and he's definitely made more figures of Spawn than of any other character from the game. That's kind of crazy but, hey, Spawn sells. This version of Spawn was one of the Gold Label edition figures but I've never really seen him being that hard to get a hold of. I picked mine up a few months ago at Back in Time Collectibles in Gastonia, NC in anticipation of this season's events. Ready to check out bumblebee Spawn? Then join me after the break... 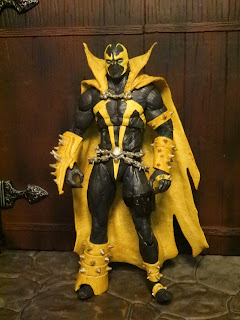 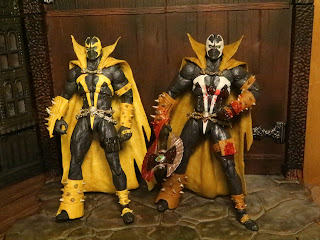 * Here's a quick comparison of this figure, Spawn (Curse of Apocalypse), on the left, and Spawn (Bloody), on the right. These appear to be the exact same sculpts with different accessories and different paintjobs. They look really cool together, though, so I've ended up with both of them.

* In terms of the sculpt, this is a very classic looking Spawn: An "M" shaped logo on his chest, asymmetrical arm and leg wear, and a chain belt with a skull belt buckle. Rather than having a smooth, superhero like look, this sculpt looks more organic with texturing on the suit that looks like muscles and tendons and stuff. The sharp spikes on all of the gear Spawn is wearing is suitably pointy as well, so be careful! The yellow and black color scheme is pretty cool. I wouldn't have thought of yellow as a go to color for Spawn, but I like it. It's not a bright yellow where it looks silly, but a darker yellow with shades of brown. It does make you think of a dangerous insect or reptile, showing off its bright colors as a warning to others. 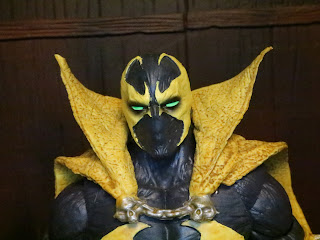 * The headsculpt is also very classic with excellent glowing eyes. I love how the green stands out against the yellow. 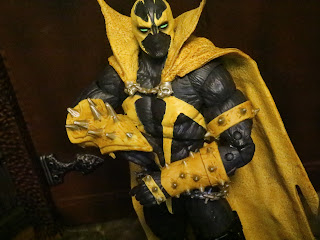 * Those gauntlets are absolutely brutal looking. Who even needs a weapon when you're sporting spikes and studs like that on your arms? 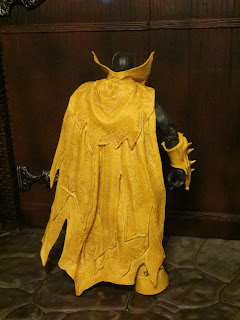 * This version of Spawn shares a cape with Malefik Spawn and most of the other MK11 Spawn figures, too. It's not a removable piece but it is fairly pliable and rubbery and looks kind of cool. Unlike some of the other MK Spawn figures, this one gets a nice wash that brings out all of the detail and makes the cape look suitably filthy. 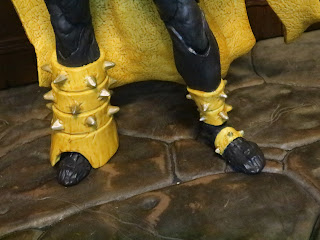 * Spawn's got some smaller spikes on his left foot and a massive, spiked boot on his right foot. Guess which one he's going to use to kick someone in the jimmy if they look at him the wrong way? Bingo. 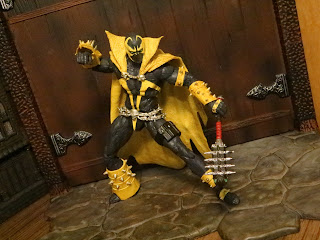 * The articulation is excellent on this figure and the plastic quality is excellent, too. Very sturdy and durable with nothing fragile or brittle. Other than the limitations imposed by the presence of the cape everything else works great and has a fantastic range of movement. He's even sporting articulated toes and lateral hinged shoulders (aka butterfly joints). These are really fun to play with and pose. It's been a real treat to see McFarlane Toys embrace articulation over the past few years and I'm appreciating their stuff more and more these days. 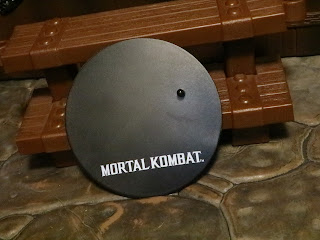 * McFarlane Toys has been including a simple disc display stand with almost all of their action figure releases for a few years now and I love it. It should seriously be an industry standard practice at this point. It's black and basic with just the Mortal Kombat logo printed on it but it gets the job done. 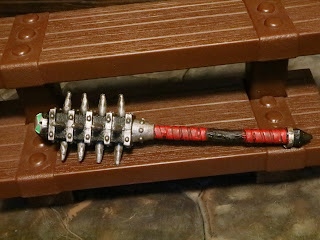 * Curse of Apocalypse Spawn comes with a crazy spiked made with a skull on top. That skull has glowing green eyes, too, just like Spawn. Man, is thing crazy looking or what? 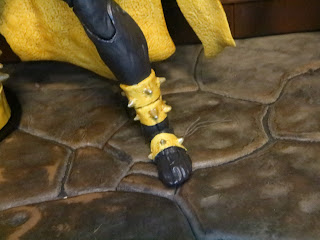 * Like the other Mortal Kombat Spawn figures, the feet are still too small. They just look off, don't they? 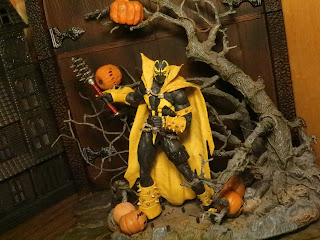 This is a pretty nice Spawn figure. With excellent articulation, a solid sculpt, a winning new paintjob, and a killer mace, McFarlane Toys put out another solid Spawny guy variant. He's easily a Great and a 1/2. While Spawn is mostly always red, black or blue, and white with a little bit of green, I really liked that these Mortal Kombat variants have changed things up a bit. There are quite a few repaints of this sculpt out there and they're all pretty good. The bloody one is definitely my favorite but this one is worth looking into, too.