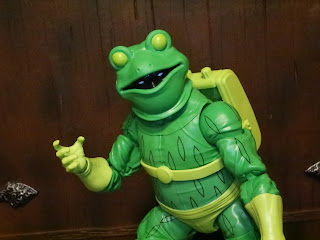 Ready for a look at the Fabulous Frog-Man! OK, so the Fabulous Frog-Man isn't a new release as he was part of the Stilt-Man Build-a-Figure series that showed up at the end of 2020, but he has had a pretty big moment of fame in the past couple of weeks. Yes, Frog-Man appeared in the She-Hulk trailer. Well, it could possibly be the villainous Leap Frog, Frog-Man's dad, since they both have the same costume. Eugene Patilio repurposed the suit that his father used as the supervillain Leap Frog, and became the heroic Frog-Man. From what I can gather Frog-Man is a pretty goofy character and I passed on this figure originally but knowing he's coming to the MCU got me pretty interested in picking him up before he ends up becoming the break out character in the Disney+ She-Hulk series. OK, maybe that's a bit far-fetched, but who knows? It turns out that this is an excellent figure and I'm kind of disappointed that I didn't pick him up sooner. Let's take a look at Frog-Man after the break... 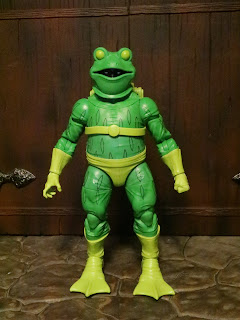 Accessories: 4 interchangeable hands, and the left arm, 2 left hands, and pistol of the Stilt-Man build-a-figure. 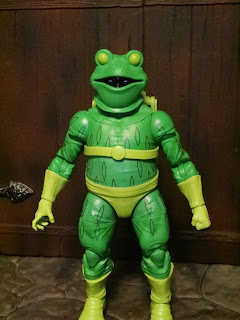 The Positives:
* I love bright, colorful superhero costumes and Marvel Legends typically delivers in that realm. Frog-Man is bright, colorful, and just stands out in the best possible way. Apparently he actually shares a body (or parts of it) with a previously released Doctor Octopus, so that's kind of cool. He looks really unique, though, and I love the simple, homemade nature of the costume and the printed pattern on it. It's very basic in the best way possible. 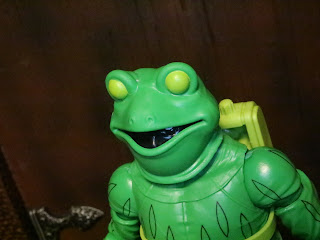 * The headsculpt is incredible. It's so ridiculously fun and goofy. It's a giant frog. Very homemade looking or like something you'd see a mascot wear. The big eyes crack me up and just draw your attention. 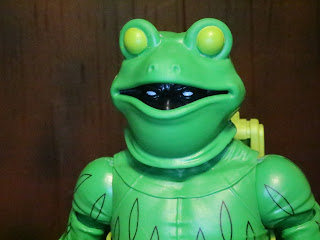 * Inside the mouth you can see Eugene Patilio peeking out. Rather than being a sophisticated costume, this is really just an oversized mask. The white eyes peeking out look kind of spooky, though the juxtaposition of the spooky eyes and the ridiculous frog suit make things even funnier. 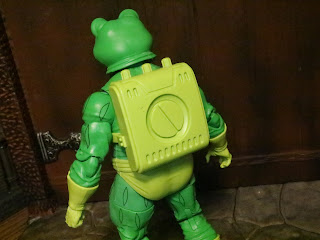 * Frog-Man has a large backpack that probably controls his electromagnetically powered leaping coils. The backpack is a separate piece but I don't think it's removable without disassembling the figure. It nicely adds to the Fabulous Frog-Man's bulk and masterfully hides the attachment points for Doctor Octopus' tentacles since the mold is reused here. 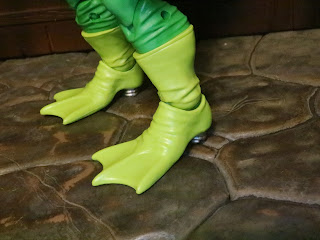 * Here's a look at Frog-Man's massive frog feet. You can also see his leaping coils underneath his heels. I love this detail! It's crazy how much effort Hasbro out into this figure! 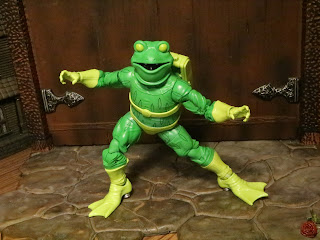 * Frog-Man sure is fun to mess around with. He has all of the joints you'd expect and a great center of balance, allowing him to stay positioned in dramatic poses. the large feet also help to keep him standing. When you really need someone to mess up the bad guys.... call on Frog-Man! 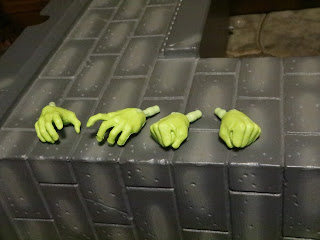 * Frog-Man comes with two sets of hands: Some gesturing, open hands and a pair of fists. They swap easily and add a little variety, so good stuff, right? 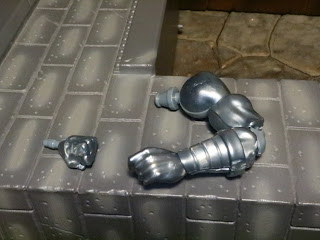 * Frog-Man comes with the left arm of the Build-a-Figure Stilt-Man and an alternate left hand fist for Stilt-Man. I'm not planning on building Stilt-Man so if you're interested in this let me know. 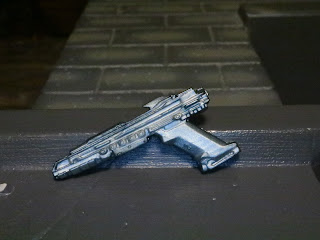 * Frog-Man also comes with Stilt-Man's gun. It's a cool design (I've seen it with a few previous figures) and while Frog-Man can't use it (he doesn't have any hands that will hold it) it's always welcome to have some extra armaments laying around. 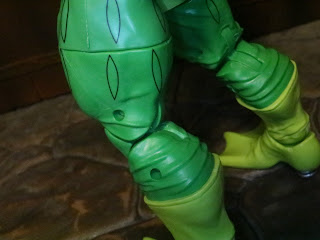 The Negatives:
* The only problem I had with Frog-Man was his left knee. One of the joints was stuck and I had to use the hair dryer to loosen things up a bit. 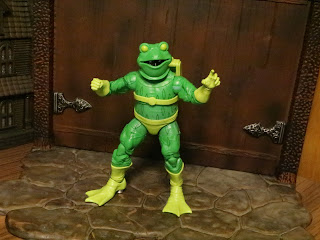 Wow, Frog-Man really turned out to be an impressive figure. He's just so wonderfully crazy and colorful. What a fun toy! I'm really glad I decided to snag him because A. He's quite fun, B. He'll look great with my other Marvel Legends heroes, and C. If he ends up being the breakout side character of She-Hulk I'll be glad I did. Frog-Man gets an Epic from me. He's such an unusual character (one I hadn't heard of until this figure was released in 2020) and he really shows how deep Hasbro is willing to go with the Marvel universe.
This is the first figure of Frog-Man/ Eugene Patilio I've reviewed. For more Marvel Legends Series reviews check out the following:
Marvel Legends Series by Hasbro (2016)
Binary
Crossbones
Darkstar
D'Spayre
Enchantress (Mystic Rivals)
Firestar
M.O.D.O.K.
Nico Minoru (Mystic Rivals)
Ultron
Ursa Major