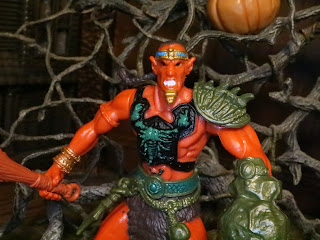 I love digging out some forgotten gems from my collection for 31 Days of Toy Terror and today we're checking out a rather obscure figure from 2008: Bomani from Chap Mei's Adventure Heroes line. Despite being marketed to budget conscious stores like Big Lots, Dollar Tree, and others of the ilk, Chap Mei has put out some rather impressive figures over the years. The difficult thing about collecting Chap Mei stuff is that it's rather difficult to even know what they've released and how to track it down. Back in 2008 they released an explorer series called Adventure Heroes with some wildly cool characters, Egyptian themed monsters, giant snakes and scorpions, and cool, steam-punk inspired vehicles. Unfortunately, the only thing I ever recall seeing in stores were four of the standard figures. Bomani is one of the villains, a scorpion themed warrior whose name means "Strong Soldier" in Malawian and "Warrior" in Egyptian. He's a cool figure that would definitely fit in well in Masters of the Universe if he were a few inches taller. Let's take a look at a spooky scorpion guy after the break... 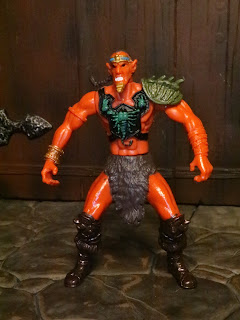 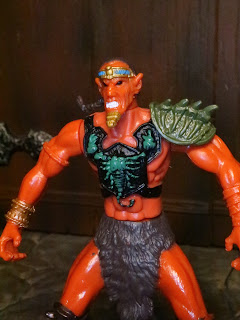 * Bomani is pretty cool. He's muscular and lean with some pretty nice detail in his sculpt. He definitely looks like someone the Scorpion King would have fought, or a villain from Masters of the Universe or Thundercats. He's got furry trunks and scorpion themed armor. Chap Mei puts a lot of detail in their figures and Bomani looks pretty impressive. * Bomani has a thin face with pointed ears, so he's definitely not human. He's also red. He's wearing a postiche, a gold beard that was a symbol of Egyptian royalty, so maybe he is descended from Egyptian royalty or perhaps even the Egyptian deities. He could always be a grave robber, though, so maybe he stole that stuff from a tomb. 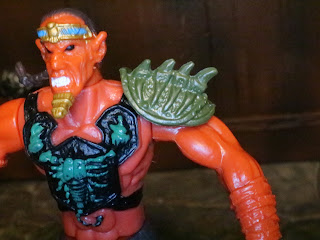 * The armor on Bomani's left shoulder is a separate piece that looks pretty wicked. it is a turtle shell of some sort? 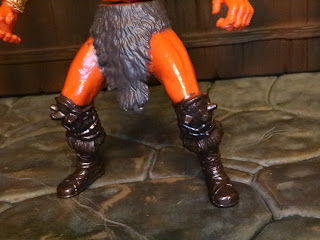 * Those boots are pretty impressive. Furry collars and spiked knee pads definitely give others a warning that you're not one to mess with. 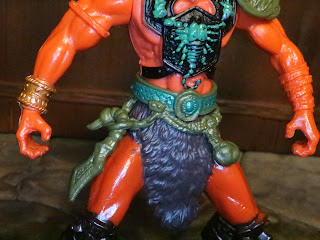 * This belt is awesome. It's removable (though it does attach via tabs on the back of the figure rather than a standard peg or something) and really adds some extra flare to the figure. There's a cool ornate dagger with a scorpion tail handle on there and some sort of pouch dangling close at hand for storing treasures or toxins. 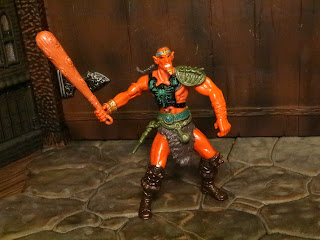 * The articulation on Bomari is minimal, but it's functional and he's a pretty durable figure. He has a swivel waist, swivel shoulders, and a swivel head. it's passable for a figure that was less than $2 dollars at the time of its release in 2008, which was still about 1/3 or less than the price of most other 1/18th scaled figures on the market at the time. It's very statuesque, like many figures from the early-mid 2000s. 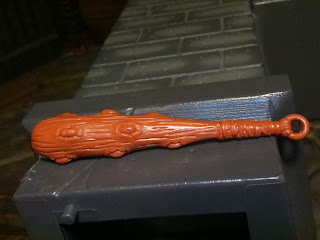 * Bomari comes with two weapons. The first is a wooden club that looks like it has had studs pounded into it for combat. It's a cool sculpt. I like the ring on the bottom. Maybe it's so he can hang it up when he gets home. 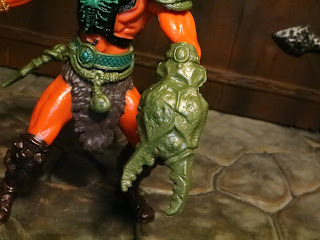 * Next up is a claw attachment that fits over his left arm. Like Clawful, Bomari can put you in a bit of a pinch. Get it? Pinch. It fits over his forearm via a small clip and definitely adds to his coolness factor. 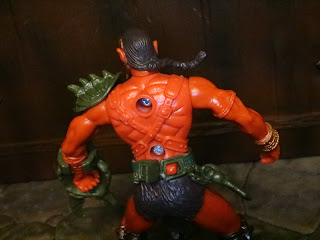 * My only complaint is that the back of Bomari isn't painted. Well, more specifically the straps for his armor. This is usually a cost cutting measure but it's one you can't see until you open the figure. Cheap!

It has been years since I last reviewed a Chap Mei figure but I just don't see them as often as I used to, particularly since Toys R Us closed. I really try to look for an eclectic mix of stuff for 31 Days of Toy terror, though, and I was excited to find this guy in my collection. A scorpion warrior? He definitely deserves a place in the Halloween festivities this year! He's a Great figure from a fun toyline. I only ever found four of the single carded figures but I wish I had managed to acquire all of the Adventure Heroes stuff. It was a cool line. Are you a Chap Mei collector? If so, I'd love to hear about your experiences in the comments below.


This is the first figure of Bomari I've reviewed on the site.