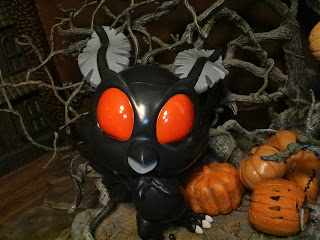 I love the Mothman. H'es always been my favorite cryptid as far back as I can remember and while as a kid I was terrified of him and didn't like to sleep with my window open. Now I'm just utterly fascinated and have even made a few trips to Point Pleasant, West Virginia to take in all things Mothman related. I'm always down for something cool and Mothman related and I was very glad to stumble upon this Cryptkins Unleashed figure of the Mothman at Time Tunnel Comics in Hickory, NC. I have the previous Cryptkins minis Mothman figures from a couple years back but this guy is much larger, at least twice the size of the previous figures, and he's pretty solid, too. He's also adorable. Mothman is part of Cryptozoic's second series of Cryptkins Unleashed figures, all of which seem easily available on their website. Ready for a close encounter of the cute kind? Then let's check out the Cryptkins Unleashed Mothman after the break... 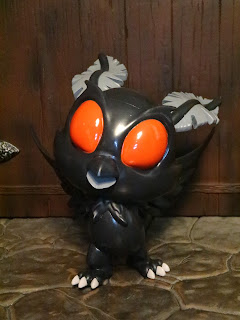 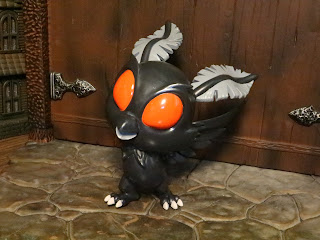 * The Cryptkins Mothman looks like what'd you get if Mothman showed up on My Little Pony: Friendship is Magic. He's mostly all black and very shiny with white clawed toes, grey, feathery ears, and those haunting red eyes. He's got a little beak, too. Kind of a mixture of a bird and a moth. 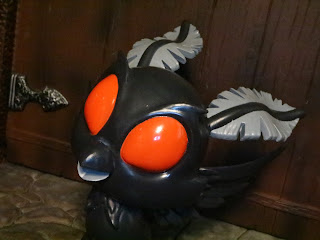 * The head is quite cute in a somewhat unsettling way. The red eyes are large and bulbous. His head is cocked a little to the side, as if he's interested in something and trying to check it out. 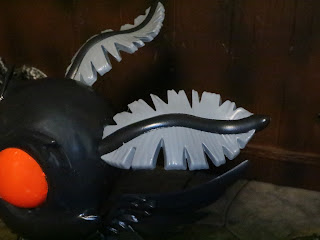 * There are so many different depictions of Mothman and while many have some sort of feelers, ears, or antennae on the head, this version's are feathery, like the antennae or feelers of a moth. That's a neat detail and it goes well with the kawaii design of Mothman here. 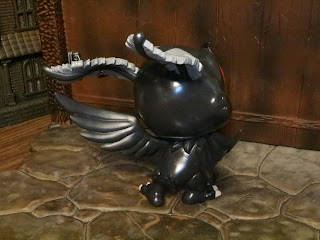 * Flip Mothman around and you can see his wings stretched out and his little tail. He's definitely striking a pose! 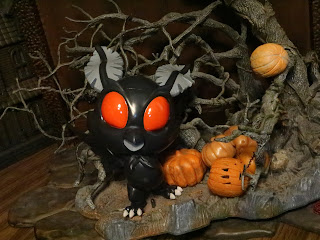 The Cryptkins Unleashed Mothman is a cute little cryptid for your collection, especially if you collect Mothman stuff like I do. I do tend to like my Mothman a bit more unusual looking, perhaps with some weirder, more anthropomorphic features, but this definitely fits the style of Cryptozoic's Cryptkins line. He's a Good and a 1/2 take on the greatest cryptid of them all. Yup, Mothman is the king of the Cryptids, so all of the other cryptids had better show some respect.
If you're looking for another toy of the Mothman of Point Pleasant, check out the Funko POP! Games Mothman #484 from Fallout 76.
Posted by Barbecue17 at 10/23/2022