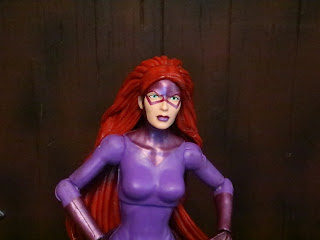 During the same trip to Back in Time Collectibles in Gastonia, NC when I picked up Black Bolt I also snagged Medusa. Black Bolt needs someone to hang out with, right?  Medusa was released in late 2017 as a Walgreens exclusive, around the same time that Black Bolt came out in the mostly movie based Black Panther wave and shortly after the debut of the Inhumans TV series. Since the TV series didn't do well, it seems that Hasbro has largely ignored the Inhumans in Marvel Legends, but who knows what the future might hold? While I never owned her (or any figures from the line), my first recollection of Medusa was from the Toy Biz Fantastic Four toyline where she had a display base that attempted to recreate her control over her hair. This version doesn't have any special action features or anything but she does have some amazingly long hair. Ready to take a look at a Medusa who won't turn you stone when you look at her? Then join me after the break... 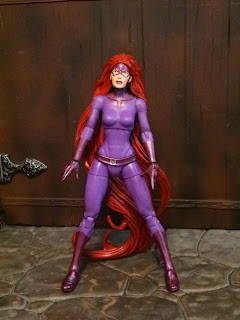 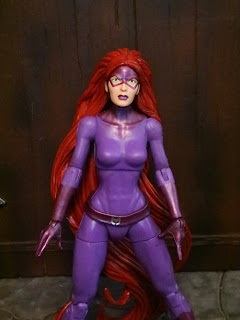 The Positives:
* Medusa (real name Medusalith Amaquelin-Boltagon) is a pretty standard Marvel Legends figure. She uses a thin, muscular female body molded in bright purple with simple painted painted details for her collar, boots, and gloves. She is sporting a cool belt that, while non-removable, is a separate piece that rests over her hips. The colors are nice here and mesh nicely with the color of her hair. 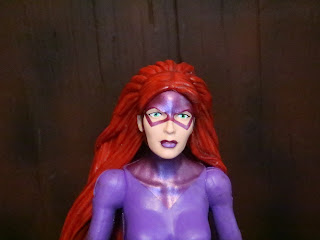 * Medusa's headsculpt is decent. Nothing amazing but not bad, either. Her mask and eyes are neat and clean and I'm loving her metallic purple lipstick. The main feature of this figure is her hair, though. 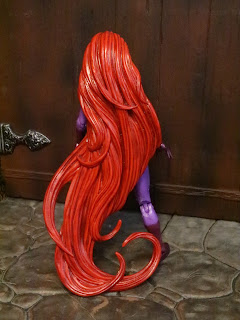 * Medusa's hair is practically as tall as her! It's part of the headsculpt, so it isn't removable or anything. While it isn't flexible or capable of any movement it definitely looks nice with lots of well defined strands. It also serves as a stand for the figure, keeping her standing despite having such heavy hair. 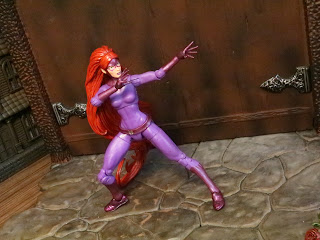 * Other than being encumbered by her long hair (which is pretty heavy), Medusa moves like any other Marvel Legends female from her era. Or most modern ones, too. Plentiful joints, an excellent range of motion, and sturdy construction. She's exactly what you'd expect to get from a fairly basic Legends figure. 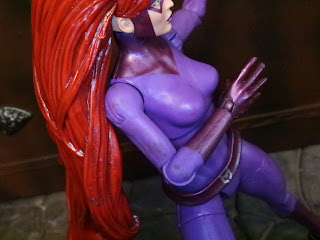 The Negatives:
* There are some weird paint issues on Medusa, particularly on her arms. It looks like the darker metallic paint has somehow gotten spread around onto her lighter purple outfit. It's just a weird QC issue. 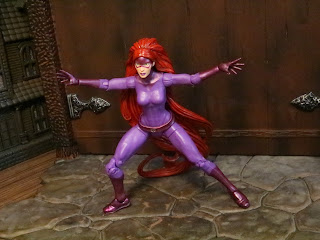 While Medusa's hair does look pretty cool, she's a pretty average Marvel Legends figure. I'd give her a Good. While the articulation and portrait are just fine, she doesn't really have much else that spices her up any. No second portrait, no alternate hands, no accessories, no uniquely sculpted details on her outfit, and no Build-a-Figure piece. Medusa figures sat on Walgreens shelves for quite some time (I wouldn't be surprised if some people can still find her there), probably due to the dullness of the figure and the lesser known nature of the Inhumans. Still, if Marvel Legends ever offers up more Inhumans or they materialize again in the MCU, I'm sure some collectors will be tracking her down.
This is the first figure of Medusa I've reviewed. For more Marvel Legends Series figures check out the following:
Marvel Legends Series by Hasbro (2016)
Binary
Crossbones
Darkstar
D'Spayre
Enchantress (Mystic Rivals)
Firestar
M.O.D.O.K.
Nico Minoru (Mystic Rivals)
Ultron
Ursa Major
Marvel Legends Series: Avengers by Hasbro
Taskmaster