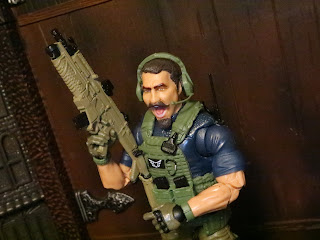 I received a few Action Force figures from the second series of releases for my birthday last month and I'm slowly making my way through them. Today I'm checking out Duster, another figure based off of a real individual. Duster is based on Tim Kennedy, a former professional UFC fighter and a current Master Sergeant in the United States Army Special Forces Group. Yes, this guy is a legitimate, literal, actual real American hero. Pretty cool, right? I wasn't familiar with Tim Kennedy before picking up this figure but it's pretty cool that Action Force has branched out like this. Let's take a look at Duster after the break and see what he brings to the line... 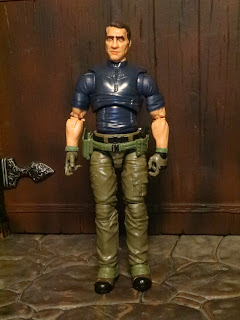 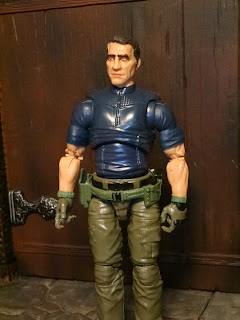 The Positives:
* The Action Force line does take advantage of base bodies, so there is obviously a lot of reuse. That fits the more realistic military aesthetic of most of the Action Force line, however, and it's the little things like Duster's short sleeves, his gloved hands, and the unique patches on his vest that set him apart from the other figures in the line. Duster's blue and green color scheme definitely fits in well with the Steel Brigade and is quite versatile. There's some solid sculpting on clothing with plenty of pockets, zippers, and wrinkles. 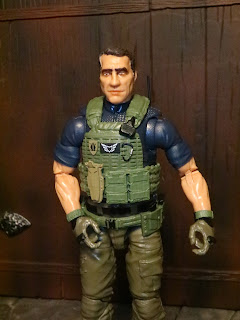 * Many of the series 2 figures comes packaged with this specific vest in a variety of colors. Duster also has a belt which isn't removable unless you disassemble the figure. His vest is easily removable, though, and works much better than the series 1 vests. I love how these look on the figures as it really completes their appearance and meshes nicely with the rest of their outfit. 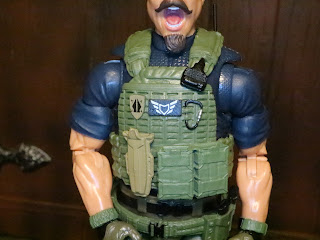 * The vests look really cool up close with all kids of patches, pouches for spare magazines, a knife sheathe, and a radio. The texture is fantastic on the vest giving it a very realistic appearance. 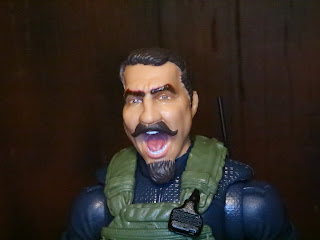 * Duster comes with two headsculpts and I'm going to talk about the second one briefly. Let's start with this one, though, which shows Duster yelling. I really like it as it's so fun and expressive. I really dig Tim Kennedy's cool stache and goatee, too. While not everyone loves expressive figures like this they can be really fun. Look at how many people use the Hood in pictures due to his angry, screaming headsculpt. 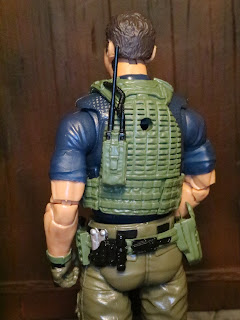 * From the rear you can see more of the great detail on the vest as well as the radio attached to it. On the back of Duster's belt you can also see a multi-tool and what looks like a small flashlight. The detail and paint hits here look fantastic and really make for an impressive figure. 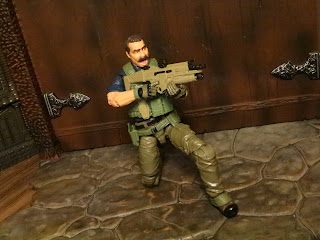 * All of the Action Force figures I've picked up so far have largely had the same articulation style. The joints and range of motion are excellent and almost everything involving Duster's articulation worked fine out of the package. I didn't have to do anything to loosen up the joints for posing here. These are sturdy, well made made action figures that are a lot of fun to pose and mess around with. 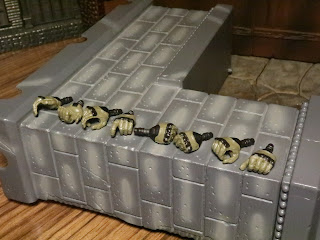 * Duster comes with eight gloved hands that you can swap out. The pegs are really thick and sturdy though I needed to use a little heat the first time to get them loosened up here, which I didn't have to do with the other series 2 figures I have. There's a pair of cradling hands, a pair of pistol grips, a pair of fists, and a pair of standard grips. 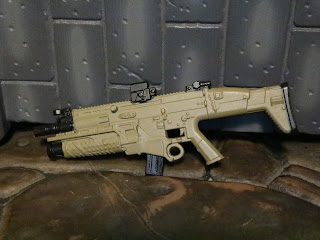 * Duster's primary weapon is an FN SCAR with an attached grenade launcher. This is a really cool modern weapon that seems to be in use by many different groups. Duster's is tan while the Weapons Pack Charlie version is more of a grayish color. Duster looks great using this, doesn't he? Pop on that screaming head and he's ready for business. 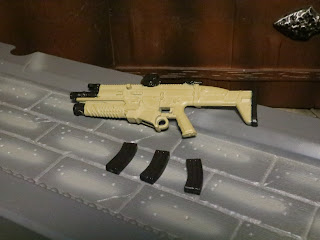 * The magazine for the FN SCAR is removable and there are three magazines total included with the figure. 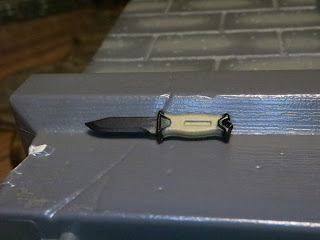 * Duster has the same cool knife that Desert Rat has except his has a tan handle. 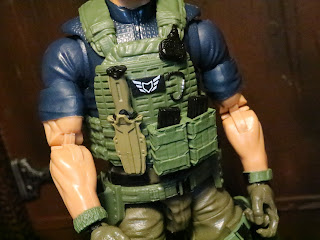 * Like the other series 2 figures with this vest, Duster can store his knife and the two extra magazines away securely. The knife slides safely into the sheathe while the extra magazines fit securely in the two pouches. 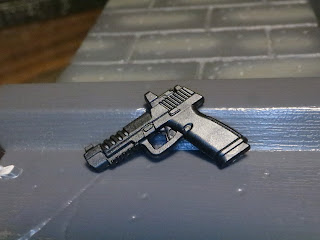 * Duster also comes equipped with an all black pistol which I believe is a Sig Sauer M17. This also appeared in Weapons Pack Charlie and it still has fantastic sculpting and lots of cool details like the extended magazine, the slide, and the enhanced sight on top. 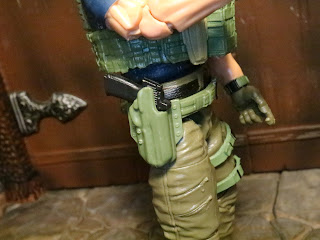 * The  pistol fits snugly in the molded holster on Desert Rat's belt. The whole thing looks fantastic and I really like that  there are even extra magazines sculpted onto the belt on the other side of the figure. 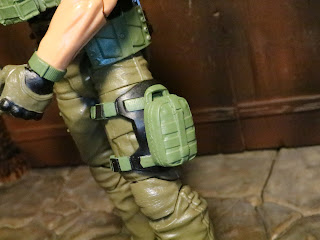 *  Duster also get the ever popular pouch on his left hip. It's a removable piece and the colors nicely complement the rest of his gear. 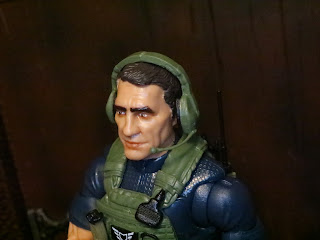 * Duster includes a headset which fits on him pretty well. I don't recall seeing this with any other figures yet so, for now, it might be unique to him. 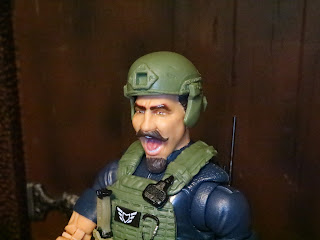 *  A standard helmet with armored earpads is also included. It's a sleek, sporty, modern combat helmet that we've seen with other figures in the line and it fits fairly well on Duster. The earpieces fit on quite well. I had a much easier time with these than the one I had from series 1. 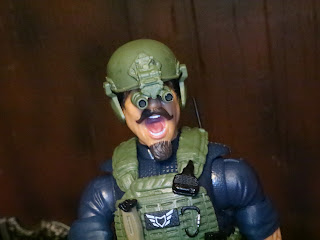 *  You can also add on some the night vision goggles. They can be placed down over Duster's eyes or with the goggles elevated above the helmet when they're not in use. 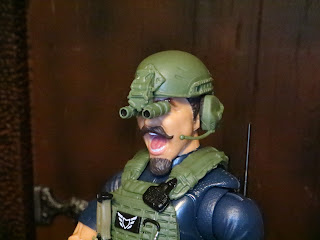 * There's a second set of earflaps that are more like headphones with a microphone attached. There's a lot of versatility here for sure. 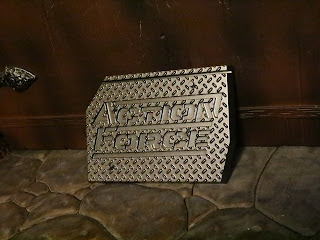 * I'm a huge proponent of action figures coming with display bases and Action Force's might be the best yet. The metal look of the display stand is fantastic and there are four pegs on the base, making it extra versatile. See that little slit at the back? If you want to cut out the file card from Duster's package you can even display it behind him. I've actually picked up some of these stands by themselves from Valaverse, too. They work great with the G.I. Joe: Classified Series figures as well. 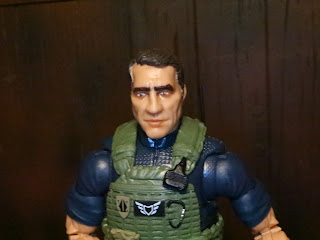 * Duster comes with two headsculpts so besides the crazy, over the top creaming portrait, there's also a normal portrait of Tim Kennedy without any facial hair. It looks like a decent headsculpt with a lot of detail and character, but...

* I just don't see Tim Kennedy's likeness in here. This figure looks a lot older than Kennedy. Am I missing something? Again, not a bad portrait, but when the figure is based on a real person I would expect the likeness to match. 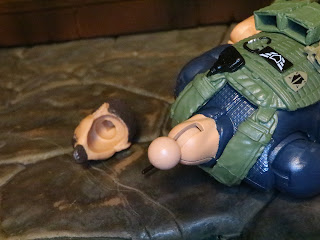 * I actually had to go and head the heads with a hairdryer on Duster. My other series 2 figures have been flawless in this area (Desert Rat, Garrison Cavalry) but Duster feels like he still has some of the issues that the series 1 figures had. 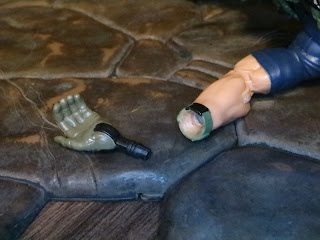 * I also had the same issue with the hands. They're durable, so I don't have any concerns with breakage, but I did have to use my wife's hairdryer again to heat the forearms for swapping hands the first few times. 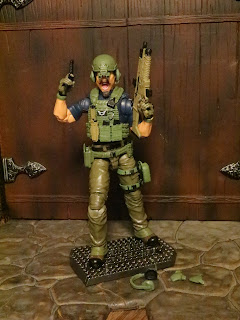 While I did have some issues with swapping parts initially that required using the hairdryer, after getting things loosened up everything worked perfectly and I'm as impressed with Duster as I am with most other Action Force figures. While the line relies on reusing a library of parts (like so many other modern action figure lines), Duster still manages to feel very unique. He's an excellent that's full of character and loaded with goodies. With two portraits, lots of removable gear like the vest, holster, and side pouch, and a very versatile helmet and headset, you've got a lot of ways to display your figure. Duster is another Epic figure and considering all of the weapons and gear, plus the quality of the figure itself, he's still a great buy. Just take your time with swapping parts and use a heat source and you'll be A-OK.