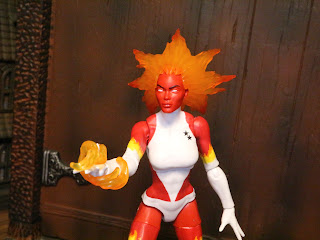 After a bit of a dry spell quite a few of the Walgreens exclusive Marvel Legends figures showed up one after the other. Baron Zemo is the newest Walgreens release but showing up right before him was Carol Danvers as Binary. Carol Danvers/ Captain Marvel has been around since the late 1960s and she has assumed quite a few different long lasting identities over the past 50 years including Ms. Marvel, Warbird, Captain Marvel, and Binary. If you want the full run down on Binary here's a great write-up from TJ Dietsch at Marvel.com but, to make a long story short, during her time with the X-Men an encounter with the Brood changed Carol Danvers into Binary who can tap into the power of a white hole in space. Crazy stuff! Let's take a look at this powerful incarnation of Carol Danvers after the break... 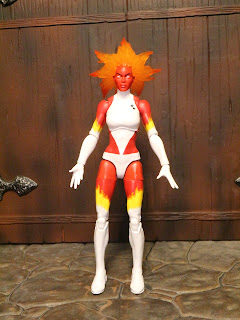 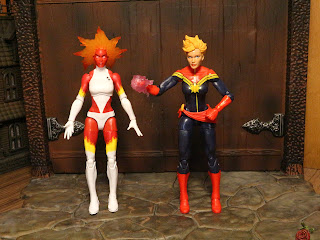 Comparison:
* Binary is on the left while the 2015 Captain Marvel (Maidens of Might) figure is on the right. They're different figures with different bodies but at least they're the same size. There's not really much of a comparison here; just a shot to look at two versions of the character. I'm pretty the 2015 release was the last time Hasbro released a comic version of Carol in Marvel Legends, right? 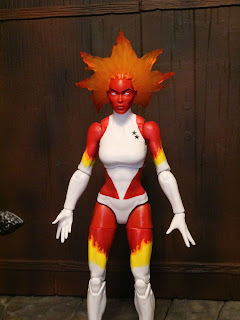 The Positives:
* Binary is one of those Marvel Legends figures whose costume is completely rendered through paintwork. She has a basic body with the outfit painted on. So... is Binary wearing a full bodies red and white outfit or is she supposed to be wearing a sleeveless, bathing suit like one piece outfit with long gloves with the red being her actual skin? Good question. It seems like different artists portrayed her costume in different ways. I think Hasbro's effort here looks more like a full body suit rather than the one piece bathing suit look but I think it really could go either way. The paintwork is bright and colorful, though, and definitely makes for an attractive figure for your shelf. 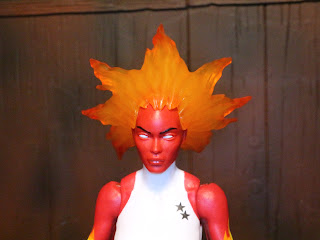 * Binary's headsculpt (and costume) definitely looks like the cover of X-Men #164 with the energy flares of her hair flying backwards. The Binary's head looks like the design of the character (red skin, white eyes) and the fire hair does a pretty good job of capturing the look of the art. It's tough to always capture an effect like this but it turned out really well and is probably the strongest part of the figure. 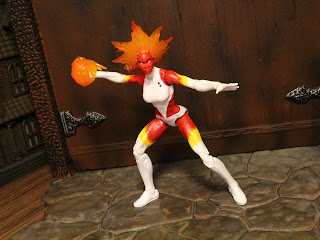 * Binary uses a standard Marvel Legends body so you probably know what to expect: A sturdy figure with great articulation and a good range of movement in most joints. There's not much to complain about here. With her energy effects, she's a super fun figure to pose and display. 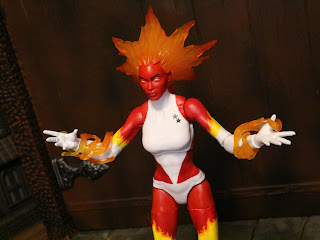 * Binary comes two energy effects that can fit around her limbs. We've seen these many times now and here they've been molded in orange-yellow plastic to make them look all fiery. 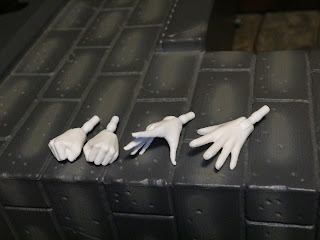 * To give her some more display options Binary comes with two sets of hands: A pair of fists and a pair of open gesturing hands. They swap easily and allow her to use the included energy effects in multiple ways. 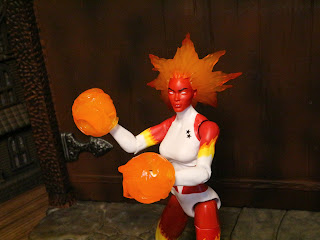 * Carol also comes with a set of photon blasts which can easily pop over her fists. I think these originally came with one of the movie Captain Marvel figures so their reuse here kind of makes sense. There's a lot of detail on them when you look at them up close. 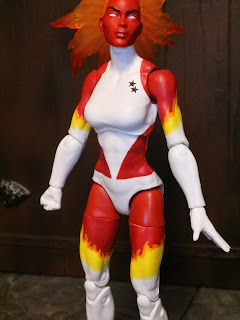 The Negatives:
* So... the flames on Binary's biceps and thighs? Those aren't supposed to be part of the costume; those are supposed to be actual flames! This definitely feels like a detail that Hasbro should have handled a bit better. If they weren't willing to actually sculpt the details on (meaning giving her a thigh and shoulder/bicep piece) then some extra effects were definitely warranted. Painting on flames just seems a bit lazy to me. 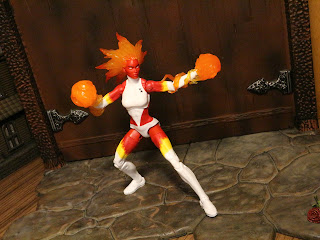 Binary is definitely a fun choice for Marvel Legends and fit into the cosmic theme that last year's Walgreens exclusives had (this year seems to be a Super Villains theme). The great thing about Hasbro's Marvel Legends line is how deep, obscure, and even random their character selection can be. It's fun to get a character like Binary in this line. Still, she's not a very complex figure and Hasbro definitely got this one done with minimal effort, particularly by painting on the flame effects. She's a Good and a 1/2 release and has been easier to find than some other Walgreens releases, so fans of Carol Danvers may want to pick her up.