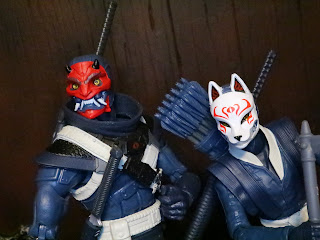 There were some cool reveals and great updates of upcoming goodies over the weekend for the G.I. Joe Classified Series at Hasbro's Pulsecon, but there are definitely a few releases on shelves (in store and virtually) available right now as well. Today I'm checking out the 2-pack of the Blue Ninjas, an Amazon exclusive set that feature a male and female blue ninja with lots of accessories. While the figures themselves are mostly repaints with reused weapons, the package does contain three new headsculpts, which is quite impressive. There's really a lot to like here as long as you're a fan of ninjas in G.I. Joe. I will admit that the ninja facet of G.I. Joe isn't one of my favorite parts of the property, but I do still usually enjoy it, especially when the figures are well crafted. While blue ninjas did appear in Larry Hama's continuation of the original comic series, they were quite different. Those blue ninjas were cybernetically enhanced ninjas wearing blue camouflage and carrying lots of high tech equipment. These blue ninjas are really just another faction of Cobra ninjas, maybe somewhat akin to the Cobra Ninja Viper. Let's take a look at this set after the break... 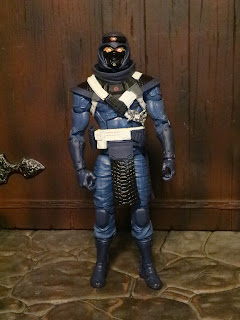 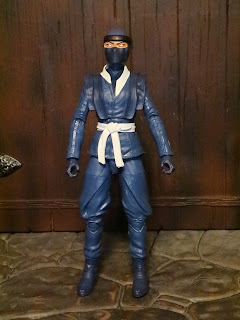 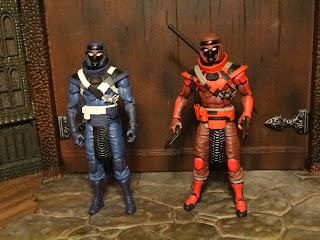 * The male Blue Ninja is a repaint of the Red Ninja from 2020. The Red Ninja was a pretty solid figure with a different look that your standard ninja. Armor, a mask stuff like that were included, you know? The color palette is shaken up a bit with some white included this time and it overall is a pretty neat looking figure. 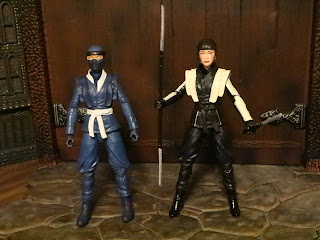 Comparison:
* The female Blue Ninja is mostly a repaint of the Akiko figure from the Snake Eyes movie, but it's honestly kind of difficult to tell that due to the new portrait and the radically different paintjob. It's smart reuse. The Blue Ninja also has new boots. 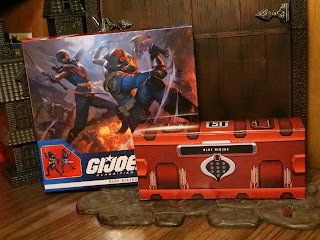 * This is the first plastic free packaging on a G.I. Joe release and it's not bad. I still don't know how these are going to fare at retail (I know my daughter has simply passed by Hasbro's boxed doll offerings at retail as they just don't compare to the presentation of other companies) but since this is an online only set, it works. The art is cool and there is a cardboard box inside with a reusable crate for storing weapons and accessories. The experience was much better than I've had with the Marvel plastic free packaging sets. 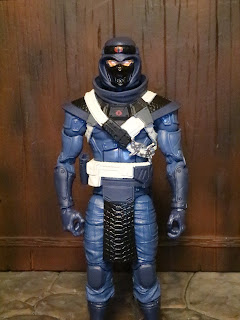 *  Since the male Blue Ninja is a repaint of the Red Ninja, we a new color scheme for that rather detailed figure. Rather than a simple cloth outfit, like what Storm Shadow usually wears, the Classified Series ninja body is quite heavily armored. The ninja is sporting a fitted blue body suit covered by lots of light but effective armor and pouches for storing his ninja goodies. The mix of blue, black, and white color scheme is very fitting for a Cobra ninjas and I find myself liking it a bit better than the Red Ninja. The paint work seems neater and cleaner here, too. 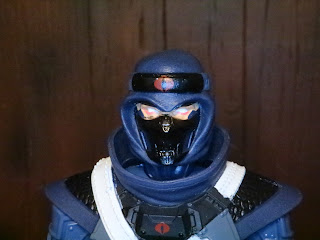 * Like the Red Ninja, the Blue Ninja isn't wearing a standard facemask or wrap. He has an unusual hood that reminds me of the Cobra Night Creepers, along with an armored facemask. You can see his glowing white eyes peeking through. These guys are apparently all loyal to Cobra as well as they're sporting Cobra sigils on their headbands and on their chest armor. 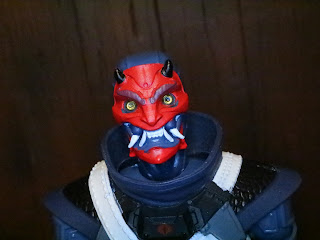 * The coolest inclusions in this set are the extra masked heads for both figures. The male Blue Ninja comes with an alternate head sporting a more standard ninja head wrap and a flaming red Oni mask. Is that awesome or what? The sculpted detail is fantastic and the paintwork hits all of the details you'd expect. This is absolutely how I plan to display my Blue Ninja and it's a worthwhile inclusion. Honestly, the masks are what ultimately sold me on this set. 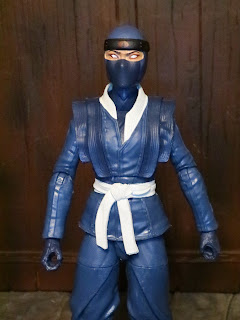 * Let's get to the kunoichi in this set, the female Blue Ninja. I only picked up Akiko recently at a clearance sale at GameStop but, even having both figures in hand, it's pretty wild how different the Blue Ninja looks with the new color scheme. It's definitely a more simple and classic look than the male Blue Ninja's armored appearance, but I love it. She's also sporting newly sculpted boots with a flat sole rather than the slight heels of Akiko's boots. 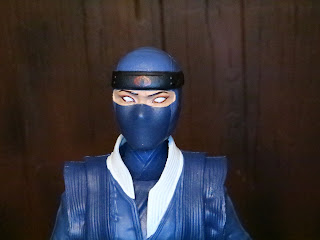 * The headsculpt is new and features a simpler, more classic ninja headwrap with a headband. The headband displays the Cobra symbol, so there's no doubt as to who this villain is aligned with. She also has spooky, glowing white eyes peaking out through her hood. 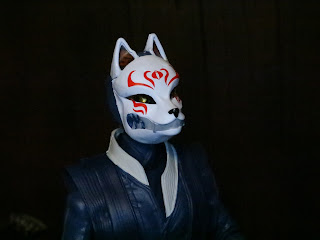 * The female Blue Ninja has an alternate portrait depicting her wearing a Kitsune mask. This is an incredible portrait and the paint and detail on the mask really make it stand out. Seriously, it was the masked portraits that really sold me on this set. 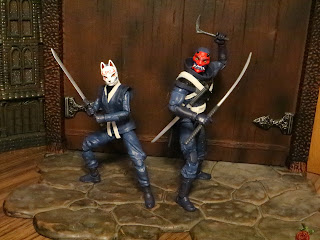 * Like the  other figures in the G.I. Joe Classified Series, the articulation on the Blue Ninjas is excellent. These are some really fun and study action figures with a great range of motion and plenty of joints. The Classified Series is probably my favorite ongoing action figure line right now and it's always cool to get new figures to mess around with. They're so much fun to play around with in hand. 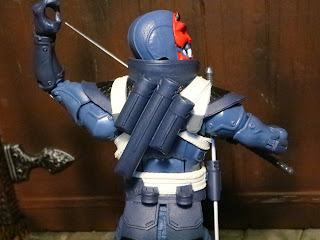 * The Blue Ninja reuses the accessories from the original Red Ninja release with some color and paint differences. First up is a simple backpack with a sheathe for one of his swords and two small sheathes for the pair of kama or sai he comes with. This fits quite securely on his back and gives him easy access to multiple weapons. 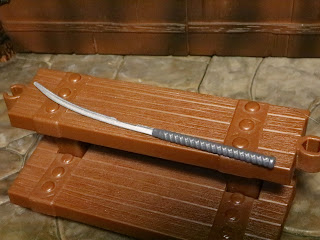 * The weapons included with the Blue Ninja originally appeared with the debut Snake Eyes figure (#00), but also came with the Red Ninja. First up is a nagamaki, a weapon named for the long wrapping around the katana like handle. Half blade, half handle, this is an ancient weapon that has been in use for over 1000 years. The paintwork on this one is superior to the other versions too, which came in all black. 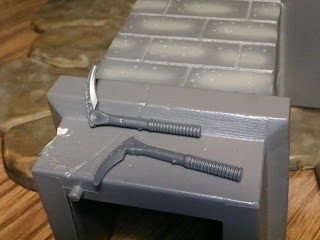 * This pair of kama are small, tactical, and can be stored in either the loops on the back of the Blue Ninja's belt or in the smaller loops on his backpack. 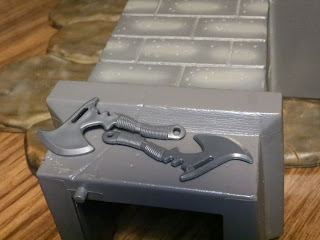 * The second weapon pairing are these nasty looking combat axes. These are small, single hand axes that seem like they have been very thoughtfully designed for close quarters combat. I really dig these. They loops on the bottom where theoretically a string could be placed, allowing the weapon to serve as a grappling hook like tool or as a way to pull the axe back after using it as a thrown weapon. 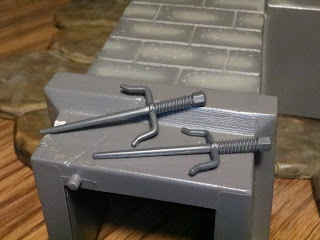 * The third pair of ninja weapons are the sai. They're grey this time around instead of black and they but they're still simple yet effective weapons with a hexagonal tsukagashira (that's the head of the weapon's pommel). 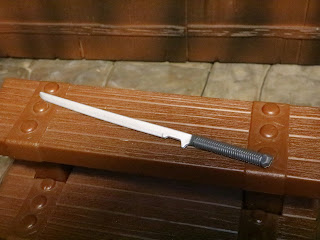 * Last up is a ninjato which can fit into the larger loop on his backpack or in the sheathe on his right hip. It's slim, straight, and looks very modern. It's also sporting a silver blade this time around to class it up a bit more. 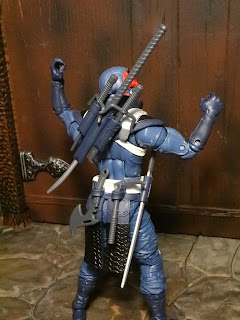 * Like the Red Ninja, the Blue Ninja can hold all of his accessories. There are three sheathes in the backpack, two loops on the back of the belt, and a sheathe on the right hip. Put two weapons in his hands and he's toting all of his gear. 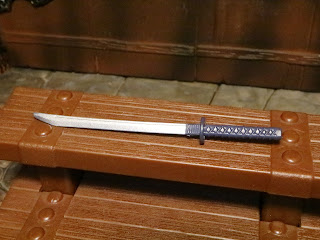 * The female Blue Ninja borrows her gear from Arctic Storm Shadow. She has the same katana, though this time the handle is blue instead of white. The blade is still silver, though, and it looks excellent. 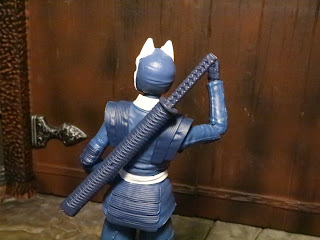 * The simple sheathe holds the katana well and stays on the Blue Ninja's back securely. She's ready to bring some pain! 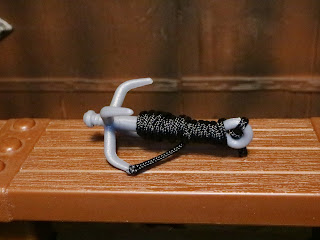 * The grappling hook is a simple piece, but it's quite cool. The string is decently sized and you can put it in the Blue Ninja's hands or wrap the rope around her waist or shoulder so she can tote it around. 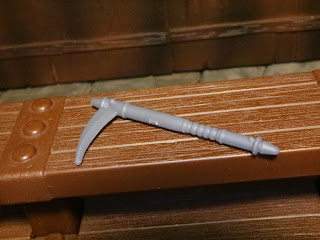 * This kama is really quite cool and it's different from the kama designated for use with the Blue Ninja bro. I mean, either figure in this set can use the weapons, but the breakdown on the packaging does show the gear divided up a certain way. This kama has a longer handle and seems a bit pointier. 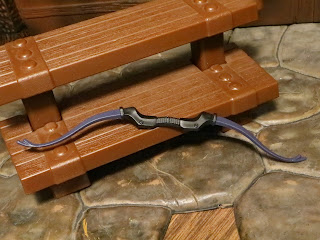 * A bow is included here, too, and it's blue and black to match the Blue Ninja aesthetic. So many of the accessories in this set have paint applications, which is always welcome. 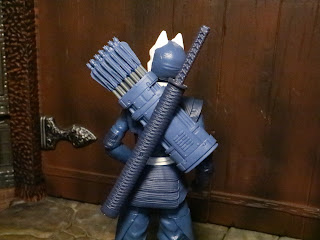 * Lastly, the Blue Ninja reuses Arctic Assault Storm Shadow's quiver.  The arrows poking out if  it are not removable but they do have painted shafts. There's also hole in the quiver so the sheathed Katana sheathe can attach to the quiver, allowing her to wear both at once. 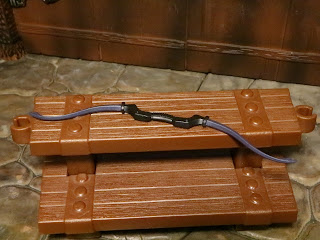 * Not only is the bow lacking a bowstring or even really a place to add one of your own, but there's also no separate arrow included. That's a bummer, right? 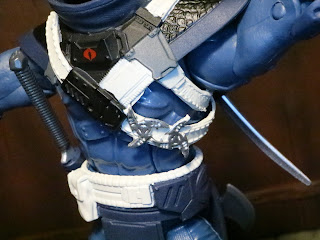 * The paint details on the male Blue Ninja's chest are much cleaner than on the Red Ninja but I still lament that his shuriken aren't removable. Remember that the 1/18th scaled Pursuit of Cobra Storm Shadow had removable shuriken around a decade or so ago. 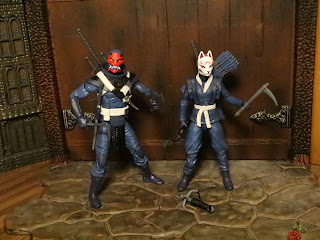 This set really turned out to be much cooler than I expected when I first hear about out. While there is a lot of reuse here, particularly with the bodies and the weapons, the three new headsculpts in the set are quite welcome. The Oni and Kitsune masks are really amazing and add so much personality to the set. Little extras like including those headsculpts and giving the female Blue Ninja new boots really show that Hasbro's G.I. Joe did put some thought into this rather than just making this a barebones repaint. It's a Great and a 1/2 set, especially if you're interested in the ninja side of G.I. Joe.