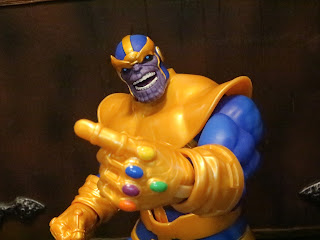 It has been almost a year since I last reviewed a Marvel Legends figure but a mixture of some great new releases from Hasbro and a recent rewatch of all of the MCU films have gotten my attention again and I've been picking up some figures I missed out on previously. I saw this fantastic new Thanos figure and I just knew that I wanted him. While I've purchased many of the toys based on the Marvel Cinematic Universe characters and enjoy them my Marvel Legends collection leans more heavily towards the comic side of things. I really like collecting the comic versions of characters who have appeared in the MCU and considering that Thanos is the big baddies of Phases 1, 2, and 3 he was a must have. Hasbro has released a few Thanos figures before but this guy is the most classic version so far. He comes in the deluxe Marvel Legends packaging with a "The Infinity Gauntlet" branding on the front and seems to be available pretty widely. ready for a look at Thanos? Then join me after the break... 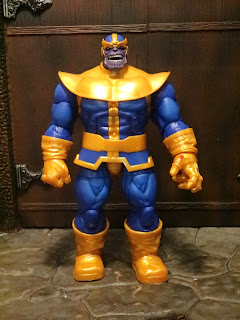 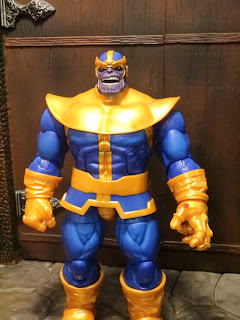 * So far as I can tell this version of Thanos is a completely new sculpt. He's wearing his classic blue and gold outfit and designed to look bulkier and just a bit taller than your average Marvel Legends figure. The gold of his outfit looks pretty nice and the blue of his bodysuit actually has nice shading to show off the details of Thanos' muscles. To further capture the design of Thanos' outfit Hasbro has outfitted him with a large gold...collar? Shoulder pads? What do you call that thing, anyways? It looks cool, though, as does his belt and bottom of his tunic. 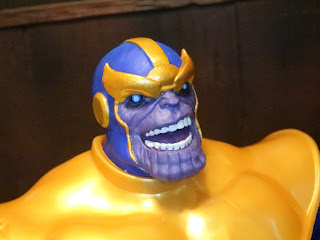 * Thanos has a fantastic headsculpt. I love how expressive he is! The work on is skin is excellent and even the individual teeth in his mouth stand out. Is this a cry of rage or a malicious laugh at finally accomplishing his long planned goal? I think there's an ambiguity to it that works for either scenario. Thanos has range. Can't deny it. 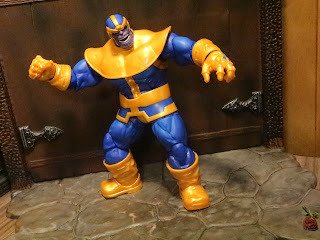 * Thanos is a burly guy so he doesn't move like those thinner, sleeker heroes but he's still a well articulated and durable figure. He's just a fun character and I've been having a blast posing him in all sorts of intimidating ways. 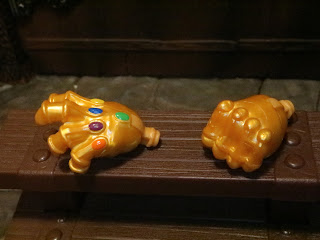 * Thanos comes with three interchangeable hands. One is a standard fist (on the right) which matches his right hand. The second is an open hand with the Infinity Stones painted on. It's pretty cool looking and makes for some great intimidating gestures. 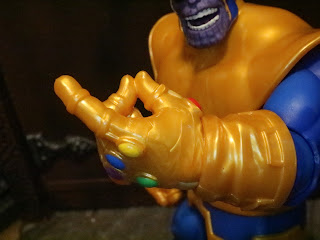 * The third hand is the best, though: It's a snapping hand! I love it! It just looks so amazing on the figure and is such a cool way to display the figure on the shelf. It's one of the best alternate hands I've ever seen! 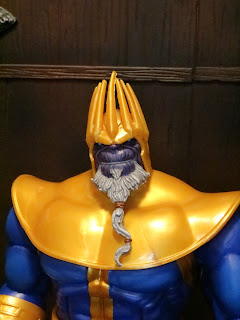 * There's a second portrait included in the set as well and it's a headsculpt of the older King Thanos from Earth-TRN666 where Thanos is victorious and has wiped out most life in the galaxy. It's a really cool sculpt with Thanos rocking a grizzled beard that'd make the Asgardians jealous and a crown befitting of Sauron himself. It's not going to be my preferred way to display the figure but it's a darn cool extra. 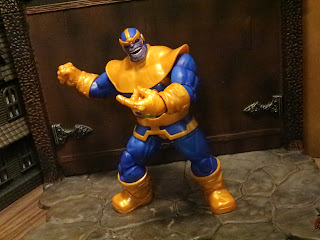 Thanos is a really cool Marvel Legends figure and a Great take on the Mad Titan. Considering he's a deluxe release it would have been nice to have gotten another headsculpt (maybe one of the ones from the Walmart exclusive figure) or perhaps another accessory or two but this is still a solid figure. Honestly, this guy kind of started my Marvel Legends collecting again. He just snapped his fingers and my Marvel Legends collection doubled! Was that how it was supposed to happen?