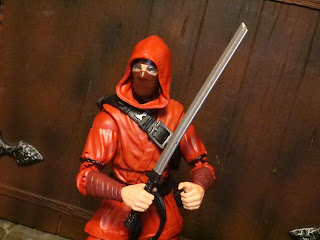 I've reviewed the Foot Soldier previously, so it's about time I got around to reviewing The Hand Ninja! The Hand is a clan of ninjas that pester the Marvel Universe with their ninjutsu skills and their mystical abilities while serving the evil demon, the Beast (not Hank McCoy). They make a great foe for a variety of your Marvel Legends heroes and are obviously an army builder. The Hand Ninja was released in the Stilt-Man series of figures that kind of tied in with Enter the Spider-Verse back in 2020 and was definitely designed to be an army builder. Each ninja came with the legs for Stilt-Man, but the legs were able to stack so you could make Stilt-Man as tall you wanted. I didn't build Stilt-Man (I actually didn't end up with any figures from that series until last month) but I still applaud Hasbro's decision there. They've since released The Hand Ninja in black/gray as a Hasbro Pulse exclusive but I've never been able to acquire that one in stock. This guy's actually a bit easier to find than that one, though I scored mine in a trade recently. Let's take a look at The Hand Ninja after the break... Accessories: 4 interchangeable hands, sheathe, sword, 2 kama, and the legs for the Stilt-Man build-a-figure. 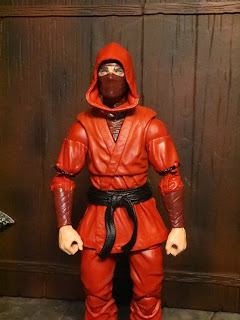 The Positives:
* The Hand Ninja is a simple ninja figure wearing red. While Hasbro has since reused this mold for the Hasbro Pulse exclusive The Hand Ninja in gray/ black, I believe that this sculpt was completely new for this figure. His outfit is simple but well sculpted with lots of folds and wrinkles on his ninja-yoroi. He's got a cool belt, too. The red colors used look good here, particularly because of the usage of two different shades to add some variation while still keeping him all clad in red. Like a red ninja, but not those Red Ninjas. 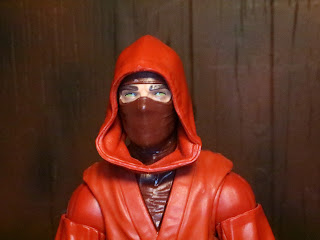 * The headsculpt is generic enough to make for a solid army builder with the focus on the hood (a separate, but not removable, piece) and the form fitting balaclava. His eyes are sort of greenish but not in a normal way. Like in a mystical way, kind of like Spawn. 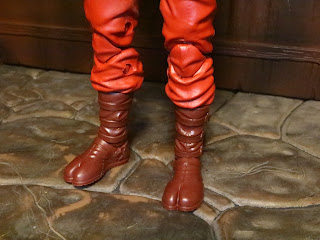 * The Hand Ninja has really cool tabi boots that complete his look. Very well done. If you want to learn more about tabi boots, check this out. I was looking for the names of these particular types of footwear and found this. 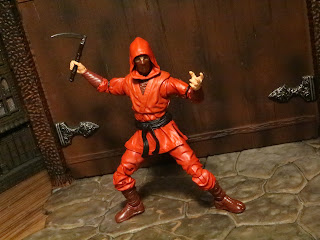 * The articulation on this guy is pretty par for the course for Marvel Legends, so it's excellent. He actually has the newer features, too, like the balljointed mid-torso and the lateral pectoral hinges. He's sturdy, poseable, and read to give your heroes a run for their money. Eh, what am I talking about? Daredevil, Black Widow, or Wolverine could eat this guy for breakfast. 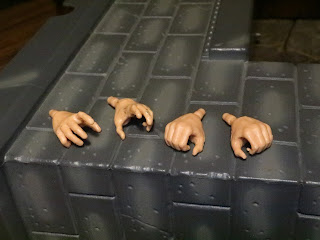 * Two pair of hands are included, too. You've got some gripping hands and some grappling hands for combat. They swap out easily and do add a nice bit of variety to the figure. 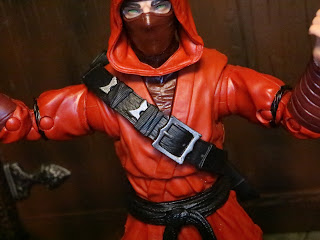 * The sheathe included with the figure has a really nicely sculpted buckle on the front with some shuriken only partially visible as they're tucked in to the belt. 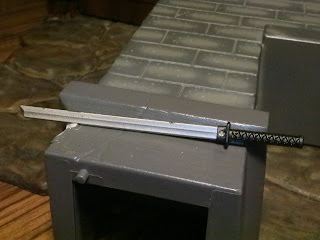 * The Hand Ninja's sword is a pretty simple piece that fits the figure well and stays securely in his hands. Silver blade, black handle. What more could you need? 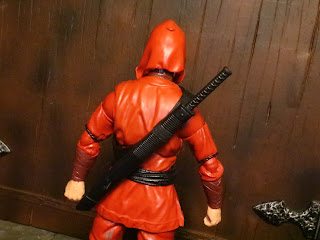 * The sword fits snugly into the sheath so it's always close at hand when The Hand Ninja wants to reach out and cut someone. 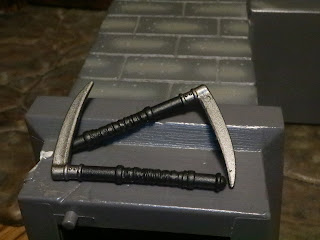 * He also comes with two kama for some up close combat. They look pretty wicked and very sharp.


* Remember, you also get the Stilt-Man legs with this guy if you buy him new. 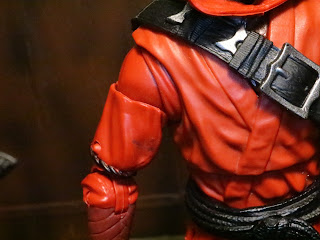 * The only fault I've found with this figure is that there are some black smudges on the plastic. It's not just paint slop, though, as it doesn't scratch away. 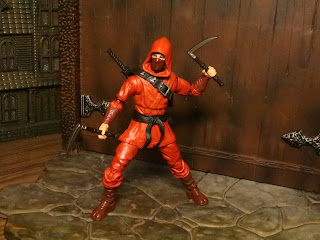 The Hand Ninja really turned out well. Yeah, he's a couple years old by now, but if you missed out on him he's definitely worth trying to track down if your villains need some help. The sculpt is really good, the articulation is fantastic, and he has a nice assortment of weapons. I'm not planning on amassing multiples of these (though I know plenty of folks have) but I wouldn't mind getting my hands on the Hasbro Pulse black/ gray clothed The Hand Ninja. This is an Epic figure that's a lot of fun to play around with and pose.