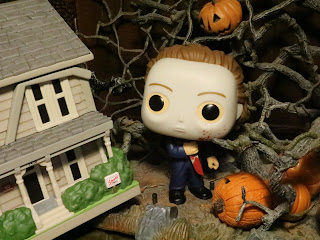 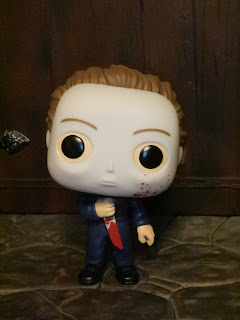 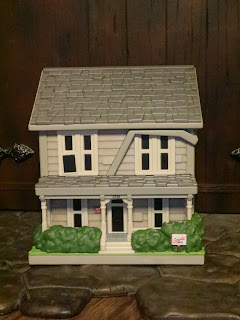 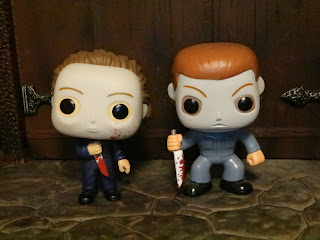 * The POP! Town Michael Myers is on the left while the original Michael Myers #03 is on the right. While they're based on the same character, these two really show the difference between the original style of POP! vinyls and how they've evolved over the past 12 years. The body is less stylized and the head is a bit more complex. More recent POP! vinyls also tend to have a pose of sorts rather than the same hunched over pose that most of the early figures had. 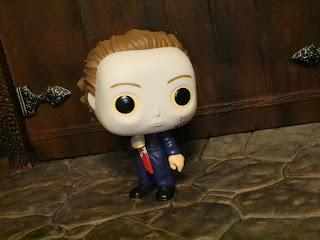 The Positives:
* Michael Myers is looking very classic here. From looking at the figure, the packaging, and the licensing information on the back of the package, it looks like this figure is truly based off of the original 1978 John Carpenter classic film. Michael's just staring with those evil black eyes (the devil's eyes) and holding up a bloody knife. He's also tilting his head a bit like he's admiring a kill, just like in the film. You can rotate the head freely on this one as he's definitely not a bobblehead. 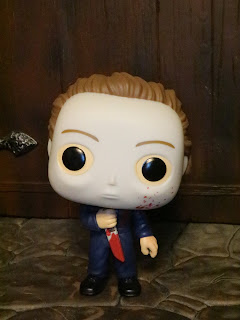 * Here's a full on shot. Michael's blue coveralls look pretty authentic to what you see on the screen and he's instantly recognizable. You can also see the head tilt here. Maybe this is right after he kills Bob? 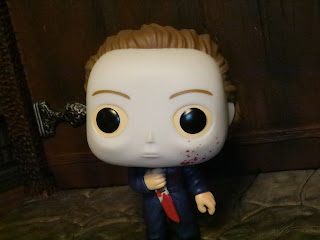 * Considering that Michael's mask is quite plain (that's part of what makes him so unsettling), Funko did add in some subtle details such as the accented cheekbones and the details of the mask. Yes, Michael is a Funko POP! with a mouth. But it's not a real mouth; it's part of the mask. The hair is also very shaggy and windswept, as the cheap hair on a costume mask would be. I mean, c'mon, the thing came from a hardware store. It definitely was meant to be cheap. 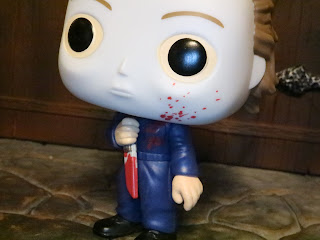 * The bloody knife not only looks cool and adds some more pizazz to the figure but there's even a spatter of blood on Michael's left cheek. Quite an effective detail on such a stylized figure. 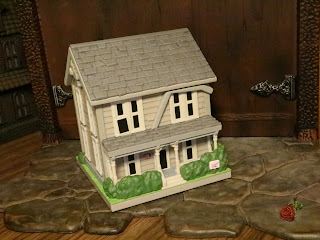 * Next let's check out the Myers House, since this is what makes this release part of the POP! Town collection. This is an interesting choice for the POP! Town line as it's not an instantly recognizable as some releases unless you're already a devoted fan of Halloween. Still, it's a spooky old house, and that's what makes it fun. The sculpt and paintwork are quite nice and while the house looks fairly realistic, it also still has a bit of a simplistic style to it to fit it in with the POP! vinyl aesthetic. 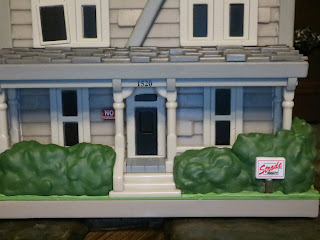 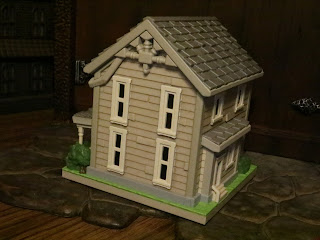 * Here's a shot of the Myers House from the side. The siding looks like it's coming off in places due to a lack of care. The eaves of the roof are also quite interesting. 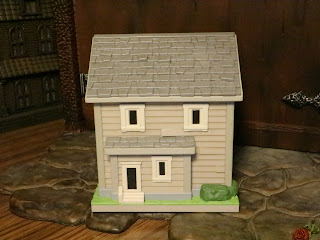 * And here's a shot of the back, including the back door that a young Michael Myers entered into on Halloween night 1963 in Haddonfield, Illinois as he sat out to murder his sister. Seriously, you could give tours of this house to your other POP! vinyls who are looking for a thrill. Think we'll ever get a Halloween Kills version of the Myers House with Big John and Little John? 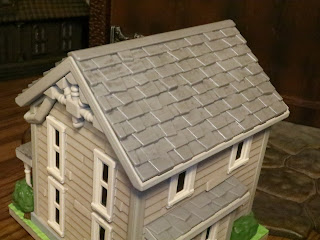 * The roof looks great. Great in a detail and atmosphere sense. In a sense of quality, there's definitely some problems with the shingles and a new roof, or at least some extensive repairs, are probably in order. 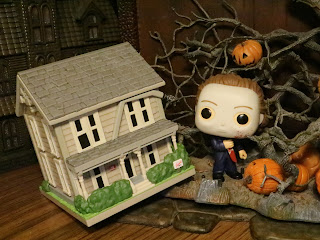 For fans of Halloween, this is a pretty cool set. I was incredibly surprised to learn that a POP! Town Michael Myers with the Myers House was a thing and I grabbed one as soon as I can. It's technically a Spirit exclusive but I actually found mine on Amazon and, since the package had some damage to it, I paid about $14 dollars less. Spirit does sell some of their stuff through Amazon, which makes this fairly easy to get at the regular retail price (or less). This is a Great set with lots of little nods to the movie that I really appreciate. Especially the head tilt on Michael Myers. That is a fantastic little detail!

For more POP! Town reviews check out the following:
Skeletor with Snake Mountain #23