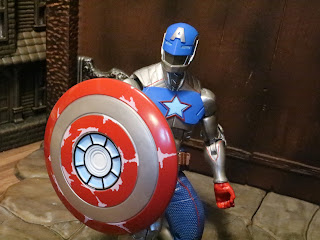 I'm super excited for Shang-Chi and the Legend of the Ten Rings but my Marvel Legends collection is mostly focused on comic based figures (or at least figures that fit in with the comic based line well). That meant that most of the current Shang-Chi series of figures didn't interest me (I have the comic based Shang-Chi from last year and he's awesome. maybe I'll review him at some point). Other than the Mr. Hyde Build-a-figure the only other non-move figures are the comic based Tony Stark A.I. and this Gamerverse Civil Warrior figure. I wasn't at all familiar with this incarnation of Captain America but it's based on the 2014 fighting game Marvel Contest of Champions and it was too cool to pass up. This is an alternate version of Cap from Earth-TRN634 where Steve Rogers kills Tony Stark during Civil War and ends up using the Iron Man technology to survive in his own suit. Personally, I like this as just a Captain America in a suit designed by Tony and it's just a really cool toy in general. Let's take a look at the Civil Warrior after the break... 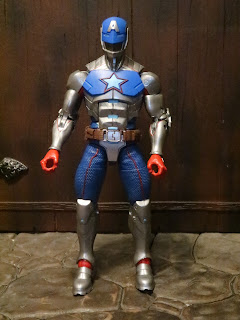 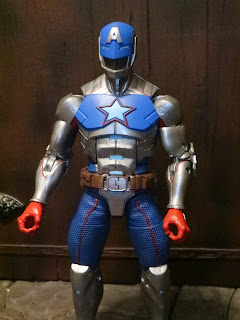 The Positives:
* If you're a fan of Captain America then there really isn't anything about this figure not to like. It's a great blending of the classic Captain America costume with an Iron Man suit. I very well could be wrong but it seems like this figure is mostly made of unique parts. The torso certainly seems like it was tailor made for Civil Warrior with the star logo reactor in the center of the armor and the military inspired belt. The paint work is excellent and the colors on this guy just pop off of the shelf. I love how he turned out. Even the molded silver plastic looks really good. The texture on the pants stands out, too. 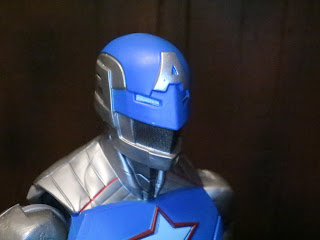 * The helmet looks like Cap's hood but obviously way more armored. There's no visible mouth, either; just a black open are that kinds of reminds me of Roboto's mouth. 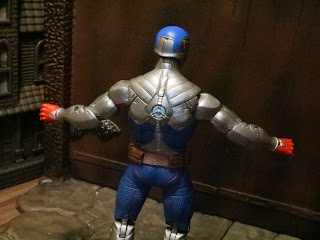 * The back of the armor is as elaborate as the front with pouches for the belt, lots of sculpted armored musculature, and a reactor of sorts. 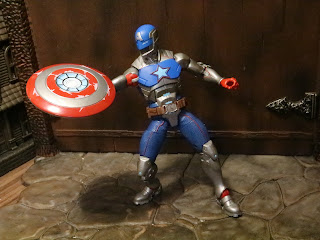 * The Marvel Legends Series almost always has great articulation and Civil Warrior doesn't disappoint. For being a guy in a suit of armor he has an excellent range of motion in almost every joint. You can get lots of awesome poses out of both without and with his shield. He's a really fun figure and I find myself picking him up and reposing him quite often. 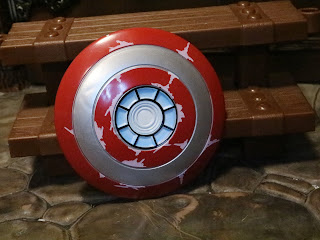 * Civil Warrior's shield is incredible. It's Captain America's shield but with an arc reactor mounted in the middle. How cool is that? Can he unleash energy blasts from the shield? I like to think so! 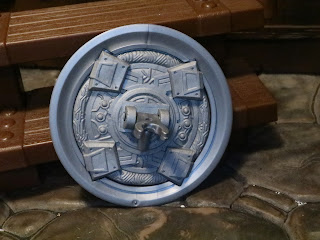 * Flip the shield over and there's actually a lot of detail on the back as well. It looks great! It also has a hinged handle that can serve as either a wrist clip or a peg. There's nowhere to store the peg on Civil Warrior but he can hold it in his hands (loosely) to look like he's tossing the shield. 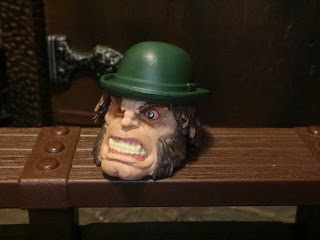 * The Build-a-Figure for this series is Mr. Hyde, a character I'm not at all familiar with. He's a pretty creepy looking guy, though, and seems to make use of the Joe Fixit Hulk body again. 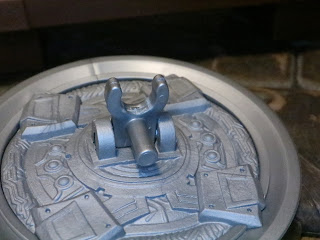 The Negatives:
* The clip for the shield already has stress marks on it. Hasbro has used these clips before on Captain America figures and they break way too easily. I wish they'd use straps or something better. 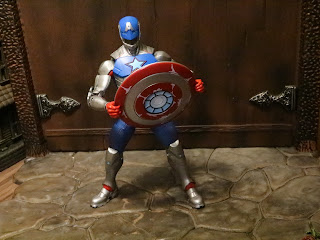 I wasn't planning on picking up Civil Warrior when I first saw him announced but when I saw him in person he really impressed me. He's a really nice action figure with a fantastic character design. I'm sure some folks are suffering from Cap fatigue and I know there seems to be some apathy towards the video game based figures but this one is so unique that I really think he's worth considering. Armored characters like this are so cool and this guy just works for me. I just wish he had a better shield clip. The shield itself is really cool but that clip just seems too likely to snap. A peg, a strap, or even a magnet would have been preferable.
Looking for more of Captain America/ Steve Rogers? Then check out my reviews of the Mezco One:12 Collective Captain America and the Marvel Legends Infinite Series 3-pack which included Ms. Marvel, Captain America, & Radioactive Man.
For more Marvel Legends Series figures check out the following: