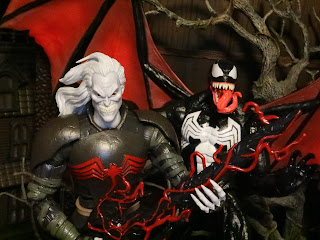 Near the end of last month I picked up the new Marvel Legends Series King in Black 2-pack of Knull and Venom through an Amazon warehouse deal. Since they're new figures and both pretty creepy, I figured why not add them into 31 Days of Toy Terror X. They fit the bill, right? I'm not very familiar with Knull or the King in Black storyline but I've been wanting a Marvel Legends Venom and Knull seemed like a pretty interesting to add to the display, so I figured I'd bite when I found the Amazon warehouse deal. Everything arrived safely and I'm now able to add these two to the Marvel Legends collection. Venom needs no introduction, and in King in Black trying to defend the earth from Knull and his army of Symbiotes/ Klyntar. Apparently Knull is a primordial evil deity who created the Symbiotes and motivated Gorr the God Butcher. He's kind of a big deal in the more recent Marvel Universe, which I'm just not that familiar with. Cool figures are cool figures, though, and I'm excited to finally have a Venom (with wings!). Let's check out the King in Black set after the break... 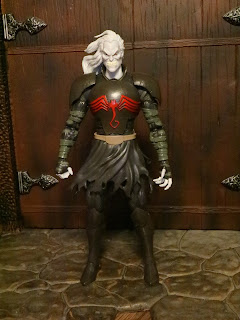 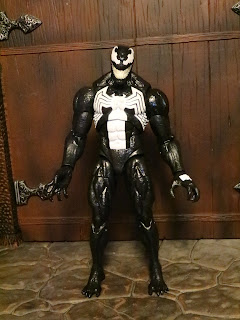 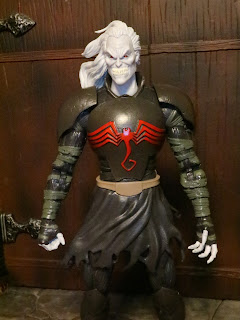 * Knull is humanoid and is tall, slender, and clad in decorative armor that looks like it's clearly from the past. His arms are covered in wrappings while his shoulder pads and chest plate are separate pieces attached to he body. The symbiote symbol looks pretty cool. There are lots of dings and dents on the armor as well, so Knull has definitely not just been sitting around all the time. 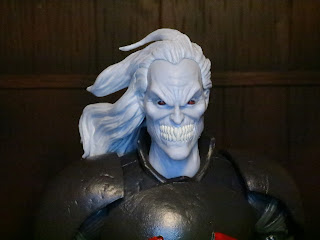 * Knull's portrait reminds me of a mixture between a White Walker from Game of Thrones and Vigo the Carpathian from Ghostbusters 2. He has white skin with just a tinge of blue, longer white hair, and some very creepy red eyes. That brow is pretty expressive, too. Knull comes with two portraits and this one shows him giving a very creepy grin that's showing all of his teeth. It's pretty intimidating. 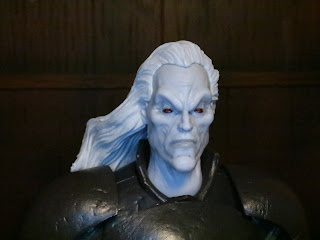 * Knull's second portrait is less expressive. He just looks displeased or annoyed. Maybe that's how he looks all the time. He's got a pretty strong chin, so at least he's got that going for him. 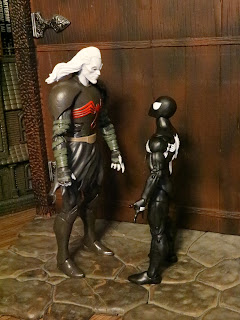 * This set retails for around $78 bucks which means that if you pay the MSRP you're paying around $40 per figure. Both figures are large enough to feel like they'd be Build-a-Figures, so that is definitely a plus. There's just something cool about the figures who are a bit larger than the rest of the regular releases and Knull fits that bill. He's noticeably taller than Spidey and most other standard figures. 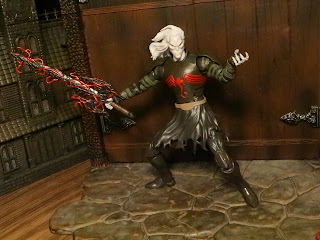 * Knull is an all new figure so he has a unique body and the new pinless joints. He moves well and is articulated as most any other Marvel Legends figure you'll come across, though he doesn't have the "butterfly" pecs. He feels durable and you shouldn't have any trouble making him look cool and menacing on the shelf. 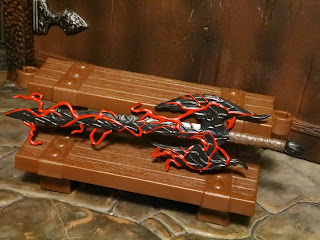 * Knull has Umbrakinesis, so he can control darkness and make things out of it. Did he make this sword out of darkness as well? This is All-Black, the Necrosword. It's actually a Symbiote and is tethered to the corpse of a celestial. It's a crazy, wicked looking blade with axe-blade like guards around the hilt and red tendrils flaring around it. 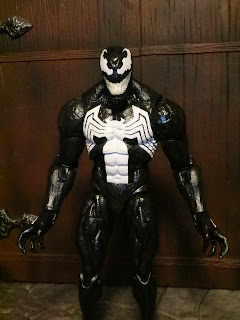 * Let's now jump in and take a look at Venom. The first Venom figure I ever owned was from series 2 of Toy Biz's Marvel Superheroes line. I also had the "Talking" Venom, who said things like "I want to eat your brains!" I've had the Diamond Select Venom on my shelf for almost a decade now but I really wanted a Hasbro Marvel Legends Venom, so he's probably my main draw to this set. Venom looks like Venom; he's black with some white details, looks bulky with slimmer, oozing arms, and his skin texture is all slimy looking. I think this body is reused from the Legends movie Venom figure from a couple years back but it fits perfectly fine in a comic based collection. 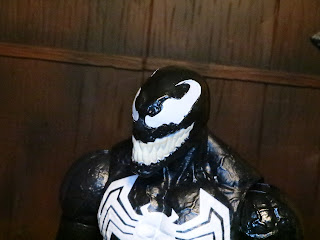 * Venom comes with two portraits as well and the first shows off his massive, creepy smile (look at all those teeth!) and his exceptionally weird eyes. He's a wicked looking chap, that's for sure. 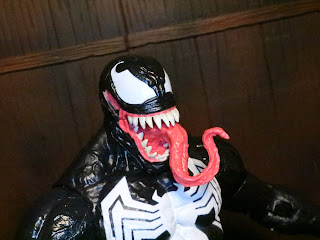 * The second portrait is my favorite as it shows venom with his mouth open and his tongue hanging out going crazy. This is fantastic work! His eyes even look larger! 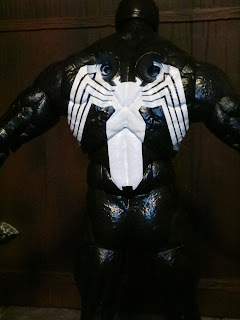 * The back of Venom has the white arachnid detail on it as well. Both sides are very neat and clean, which is impressive for white paint over black plastic. 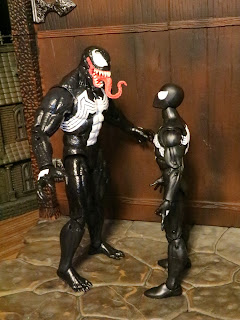 * Like Knull, Venom is pretty large. Maybe not quite as bulky or tall as a Build-a-Figure, but he's definitely a bigger guy than your average Marvel Legends figure and makes guys like Spider-Man look small in comparison. 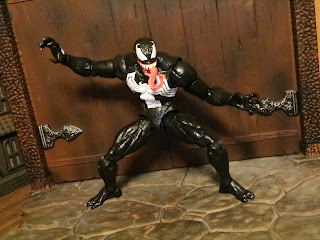 * I think this Venom body is from 2020, so it's still pretty recent. It has a great range of motion and it still really fun to pose. Venom's always fun to pose, though, isn't he? Those crazy arms and claws, putting him in weird crouching poses; he's just so very expressive. 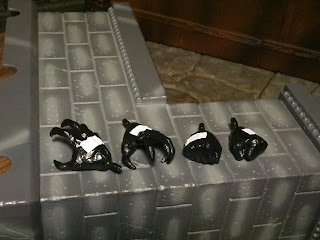 * Venom comes with two sets of hands: His gesturing hands with long, claw-like fingers and a pair of basic fists. It's nice to have some variety but the expressive hands are definitely the way to go here. 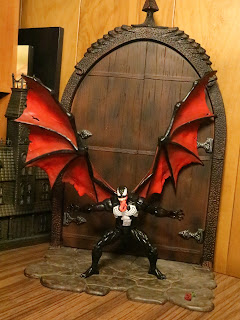 * What really sets this Venom figure apart are his massive wings! They're red and black and just look really utterly terrifying. He's seriously creepy with them and it's a pretty impressive sight to behold. The wings attach to the back of the figure and each have a swivel/hinge joint at the base with a swivel midway on the wing so they can fold in a bit. Who knew that we needed a winged Venom? 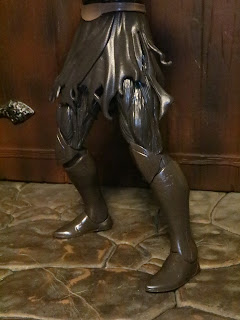 The Negatives:
* From the waist up Knull looks pretty impressive with some decent paint applications. Comic based Marvel Legends typically have a very clean, bold appearance, so they're not usually covered in extreme amounts of paint detail. From the waist down, however, Knull looks unfinished. He just looks overly shiny and there's no detail present. For a larger, "deluxe" figure like Knull, it seems a bit bizarre to have no painted detail on over half of the figure, especially on boots. 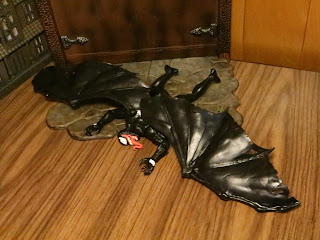 * Venom's wings are cool and if you're holding him and having him fly around your home to attack those who live with you, you should be good. Trying to pose him is a different story, though. The wings seem a bit too rubbery and heavy and they easily cause the figure to fall over. If you're going to display him standing with them you're going to deft fingers of a Jenga champion and possibly something like fishing line. Venom himself may have needed to be a bit bulkier or heavier to get this to work properly. 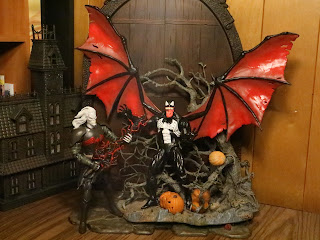 Both figures are quite cool and fun but, for the money, the set feels lacking. The alternate portraits are appreciated but why no extra hands for Knull? Surely a few sets of extra hands for both figures could have been tucked in. Some extra accessories would have also made a difference as well as more paint applications. You're essentially paying close to $40 per figure if you pay retail (I got mine at a steep discount), but compare these to other figures in the market and these just don't seem to have the same amount of "oomph" you'd get from a comparable purchase. This is still a Good and a 1/2 set but it's far from the knockout that it should have been.