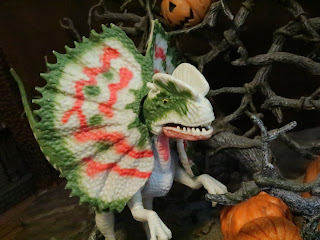 The Jurassic Park franchise got it's sixth installment this year with Jurassic Word: Dominion. It was OK. Not fantastic but not completely awful. The best part of the film was seeing the original cast again which made me nostalgic for the original Jurassic Park. While Mattel seems to be doing a nice job with the basic toyline (I think their collector targeted figures are too allover the place), for today's installment of 31 Days of Toy Terror X we're heading back to 1993 to take a look at the Electronic Dilophosaurus from the original Kenner Jurassic Park toyline. I really loved the Dilophosaurus, AKA Spitter, from the original film. The original movie made each dinosaur feel so unique and memorable, even making the three carnivorous dinosaurs horrifying in completely different ways. Dennis Nedry's encounter with the Dilophosaurus is still a pretty terrifying scene and still better than the Spitter scenes in Dominion. I had the standard Kenner Dilophosaurus but I ended up wanting this one as a kid, too. It was probably because of the frill that was included with this one. I have also recently learned that this figure was used by id Software in modeling the demon/ pinky enemy, so that's pretty cool, too. Let's take a look at a creepy creature I've had in my collection for nearly 30 years after the break... 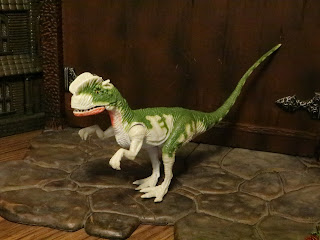 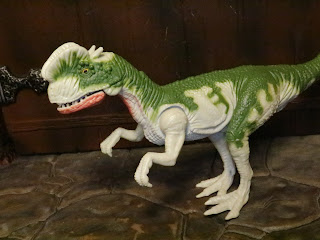 * While the Electronic Dilophosaurus is colored differently and a bit larger than the movie creature and the standard figure in the line, it still looks like Jurassic Park's depiction of the Dilophosaurus. Kenner put a bit more meat on her bones than the standard figure and she has brighter colors: A mottled mixture of green and white. I like it quite a bit. There's an excellent texture on the skin; Kenner's Jurassic Park dinosaurs were way ahead of nearly everything else out there at the time. 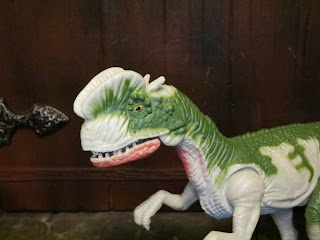 * The head actually looks a little fiercer than the movie Dilophosaurus. It still looks like the same species, though. Just a bit larger. She's definitely not the runt of the litter for sure. The paint work is pretty nice on the eyes and I like the red on her throat. That's just coloring, right? There's surely no way Kenner painted blood there, dripping down the animal's mouth. No, of course not.... 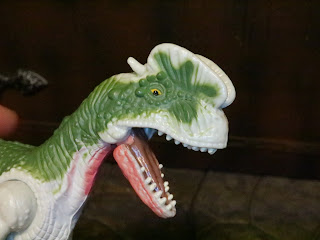 * This figure was a "deluxe" release so besides just being a bit larger than the standard figure she also has an electronic scream. Move her left arm at the shoulder and the Dilophosaurus lets out a shrill cry and opens her jaws. The batteries in mine don't work anymore (though they did a few years back, at least) but it was a cool feature at the time and the lower jaw still opens and closes fine today. 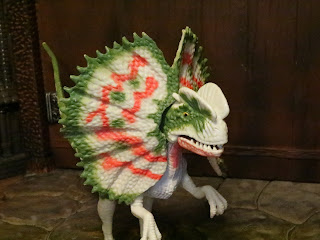 * As I mentioned above, the selling point of this one for me back in the day was the inclusion of the frill. While the Jurassic Park depiction of the Dilophosaurus is largely inaccurate to the real animal ( which had no frill, no venom spitting, and was a good bit larger), it certainly made for an amazing design, so that large frill was a huge part of the creature's look. The frill is a hard rubber piece that fits over the neck of the figure. You may have to mess with it a bit but it looks great once you get it in position. 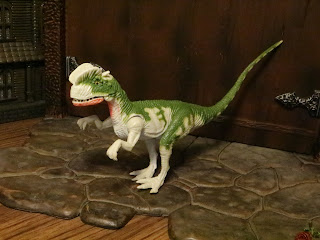 * Before Kenner's Jurassic Park toyline most dinosaur toys were simply rubber. The only other line I remember with articulated dinosaurs was Tyco's Dino-Riders, which were all quite cool. Those sculpts were even reused as part of a Smithsonian Institution branded dinosaur toyline (and again later in Cadillacs and Dinosaurs). Kenner's Dilophosaurus isn't crazy poseable but she does have swivel hips and swivel arms, though the left arm is tied to her opening jaw feature. These toys are really sturdy and were designed for serious play. 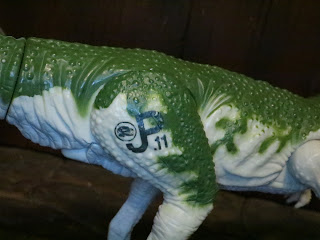 * To "brand" the dinosaurs as official Jurassic Park toys, Kenner came up with a cool logo and began numbering the dinosaurs. It's definitely a branding thing, but I've always liked it.
*The Jurassic Park figures also came with a very cool trading card with original art. I don't have the original card anymore, but the Electronic Dilophosaurus' card was called Spitter Danger! 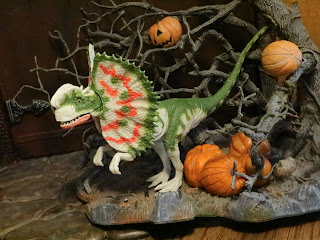 I loved my Jurassic Park toys as a kid and while I kept quite a few of them, I wish I had kept more. Oddly enough I didn't have that many Jurassic Park dinosaurs as they were a bit pricier than some of the other figures and I had plenty of other dinosaurs to fill in from other toylines like the ones mentioned above. The Electronic Dilophosaurus was one of my favorites, though, and is still a pretty neat looking figure with a really creepy vibe. Definitely worthy of a Great and a 1/2 rating for sure. What was more terrifying? The original film or the original novel? I still get creeped out by the scene from the book of Nedry's death and the T. Rex going into the water after Grant and the kids in the raft. Frightening stuff!

For more reviews from Kenner's Jurassic Park line check out the following:
Dimetrodon
Velociraptor
Posted by Barbecue17 at 10/26/2022