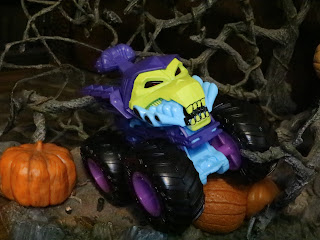 No, this year's 31 Days of Toy Terror theme isn't Skeletober (that was last year's theme), but there are still plenty of Skeletor themed items on the countdown for 31 Days of Toy Terror X and today's is one of the weirdest: A Skeletor monster truck! Last year Mattel put out a Battle Cat truck in their Hot Wheels: Monster Trucks line and this year we've got Skeletor. Pretty crazy, right? I love unique and bizarre stuff like this for Masters of the Universe! Let's get ready to roll with monster truck Skeletor, the bone daddy rolling baddie of the Eternos City coliseum. We'll sell you the entire seat but you'll only need the edge.... 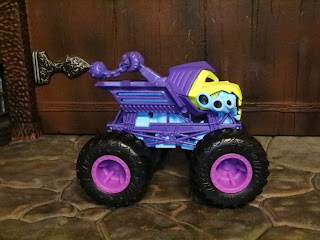 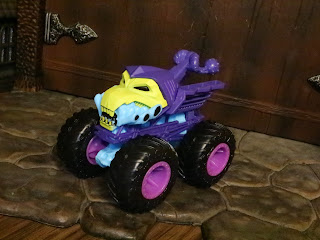 The Positives:
* Who doesn't need a Skeletor themed Monster truck in their collection? This is clearly a machine and not some unholy mixture of Skeletor and technology, so you'll see most of the stuff you'd expect to see on a Monster Truck. It's all been given a Skeletor themed paintjob, though, along with a unique cab and truck bed. Like the other trucks in this series you can see the engine, the body is a mixture of diecast metal and plastic, and the vehicle has a simple system that emulates shocks. 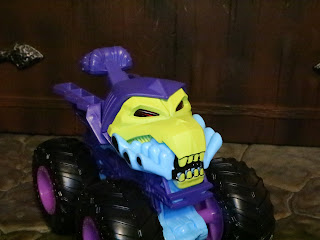 * The design of the cab reminds me a lot of the Hot Wheels Character Cars Skeletor but it also looks like one of the Skelecons, the minions who originated in the UK Ladybird kids books. I like the look of the skull and the red eyes that make up the windshield. The pipes sticking out of his mouth are a great effect, too. It'd be pretty cool if the horn of this truck went "Nyeh!" instead of "Honk." 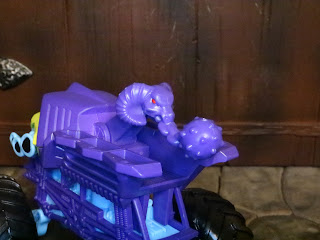 * The bed of the truck kind of looks like Skeletor's harness and there's a mechanism that looks like the base of a tow hook but, instead of a hook on the end, there's a Havoc Staff-like headpiece with a spiked ball hanging from a chain. 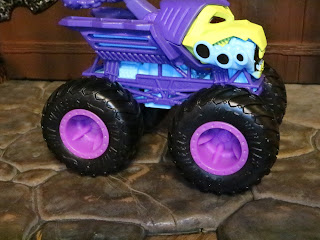 * The wheels on Skeletor are huge and they're actually rubbery, too. They look really cool and are perfectly functional for rolling over the good guys. 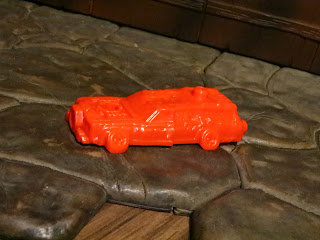 * This series of Hot Wheels: Monster Trucks come with small, smashed plastic cars that can be attached together via some simple pegs and ports. 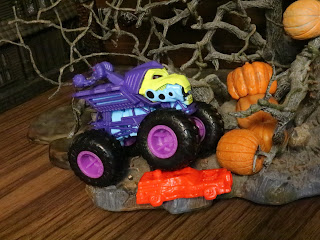 I'm really hoping that Mattel continues to add these Masters of the Universe inspired Monster Trucks into the Hot Wheels line because they've both been really fun so far. The Skeletor truck is hilarious and really well designed with a great color scheme. It's fun, silly, and a solid, well made toy. Considering these retail for around $5 bucks (sometimes a bit less), you're getting a pretty cool item to add to your collection. Skeletor is a Great and a 1/2 toy and a fun and slightly spooky supplement to the season.

If you're a fan of Skeletor/Keldor then make sure to check out Snake Mountain, the archive for all of my Skeletor reviews.