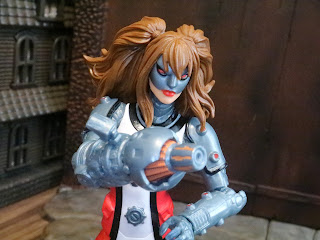 While I'm very familiar with Marvel Girl/ Jean Grey I can't say the same about her series mate, Omega Sentinel, who I'm reviewing today. She's part of the recent House of X/ Tri-Sentinel series of Marvel Legends figures although from what I have gleaned she's actually from the Powers of X comic series. Weird, huh? I purchased this figure just because she was incredibly cool looking so I had to do a bit of research. Omega Sentinel is actually Karima Shapandar, a former Indian police officer who was turned into some sort of Sentinel through nanotechnology and who has been part of the X-Men at times. I'm definitely more focusing on comics from the late 60s- through the early 90s in my current reading but I very well may get around to some of the series she shows up in in the future. For now, though, I'm just enjoying a cool figure. Let's take a look at her after the break... 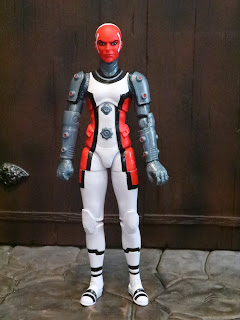 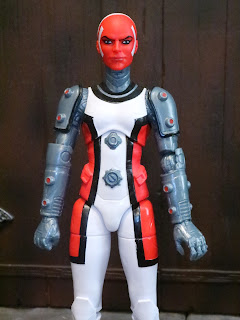 * The colors on Omega Sentinel are outstanding. I love the red and white with black outlines of her suit and her nanotech inspired parts look fantastic, too. She has a very impressive, very neat look to her. It's very modern with some classic comic flare and the bold, dark lines separating the colors. Hasbro really went all out with Karima as she seems to be a mostly new sculpt. She seems to be mostly unique. Heck, even her legs have some sculpted elements on them. Hasbro has been going all out on my Marvel Legends releases lately and it shows. They also kept the paint applications on her clean and as sharp as cheddar cheese, which is impressive with the white and black lines. 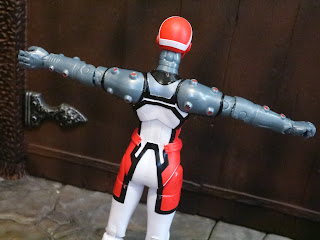 * Everything looks good from the back where you can continue to admire the great paint work, bright colors, and the cool armored look of her nanotech infused arms. Her outfit reminds me of characters like Kabuki and Katana though she's clearly not Japanese from what I have learn about her background. 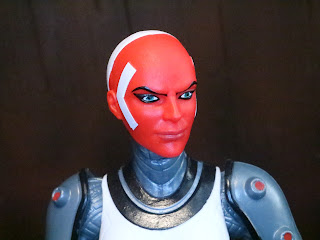 * This is Karima Shapandar from the future and I wouldn't have recognized that without help from the good folks at OAFE.net. She has a very piercing look and some amazing colors and paintwork. Her eyes are  incredible! I'm not going to pretend I understand anything about an X-Men storyline I haven't read so I'm just an outside admirer here. 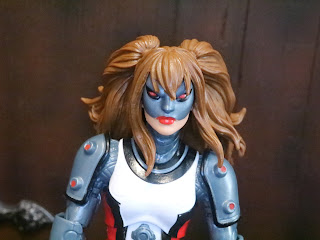 * Omega Sentinel comes with a second portrait that, again, just seems like it's influenced by Japanese design and anime hairstyles. It's awesome and Karima Shapandar has some gorgeous hair here tied back in two ponytails. The heads swap easily and it's always nice to have some variety in how you display your figures. 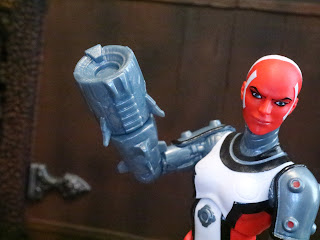 * Omega Sentinel's arms pop off at the elbow so you can swap on some cool weaponry. There are two options and both can fit on either arm. First up is a large, round cannon arm. I have no idea what it does but it surely can cause some destruction! 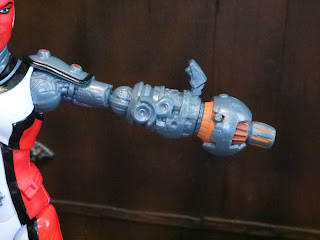 * The second arm is another large cannon with lots of detail and some cool painted details on it. This i my favorite of the two. 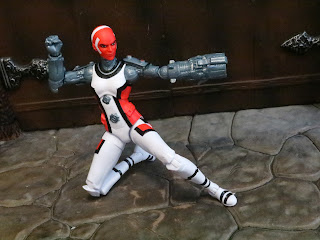 * Omega Sentinel has amazing articulation. There's really nothing that impedes her joints. You might think that the shoulder pads would get in the way of her shoulder movement but, nope! They are pliable and just slide up onto her shoulders. She's really, really fun to play around with! 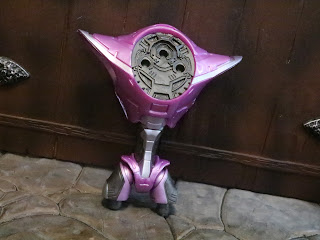 * This series comes with the pieces of an unusually spindly Sentinel called called the Tri-Sentinel on the packaging. I'm not sure that I'm planning to build this but it seems rather tall and the torso this figure comes with is pretty decently sized. 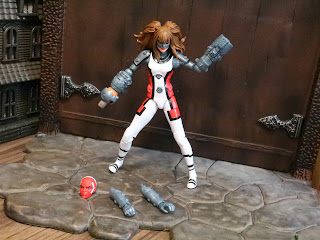 Knowing next to nothing about this figure like I do, I still think the Omega Sentinel is a pretty amazing action figure. She has such wonderful paintwork and is just so incredibly visually appealing. The red, white, and black look fantastic! The swappable arm weapons and interchangeable heads also make for the ability to create quite a few unique looks for the figure. I'm still reading through older X-Men stuff but I'm really looking forward to the modern era. It seems like there's some cool stuff. Omega Sentinel is an Epic figure and well worth picking up if you stumble upon her. I'm sure you can find a space for her somewhere in your collection!
This is the first figure of Omega Sentinel/ Karima Shapandar I've reviewed. For more reviews from Hasbro's Marvel Legends Series check out the following:
Enchantress (Mystic Rivals)
Firestar
M.O.D.O.K.
Nico Minoru (Mystic Rivals)
The Punisher