31 Days of Toy Terror X: Skeletor from Masterverse/ Masters of the Universe: New Eternia by Mattel 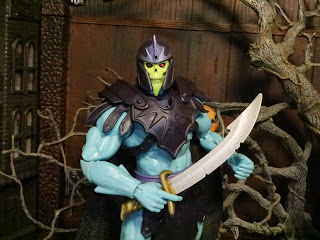 Sometimes I review figures and hold off on posting the review until 31 Days of Toy Terror to make sure that I have some recent stuff during this October festivity as well. While lots of horror toys come out, I don't collect them all and the ones I do don't always come out in that sweet period between late August and Halloween. If I want current stuff, I have to plan ahead a bit. Let's take the star of today's installment of 31 Days of Toy Terror: The New Eternia Skeletor. This guy came out much earlier in the year but I didn't get mine until mid-late June and I'm just now getting around to reviewing him. I'm still really excited about this guy because while it's Skeletor, it's also a new variant of Skeletor based on elements from a few Mark Taylor art pieces created during the birth of Masters of the Universe. The New Eternia figures so far have been a great blend of new concepts and classic details with this version of Skeletor borrowing from the vintage figure and the Mark Taylor pieces "Evil Incarnate," "Skeletor," and the piece that came to be know as Demo-Man. Let's take a look at this New Eternia version of Skeletor after the break... 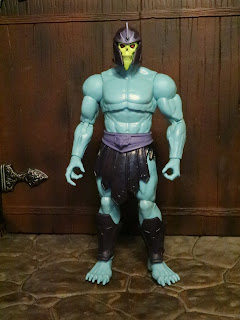 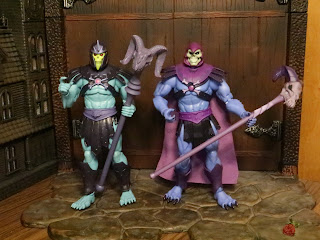 Comparison:
* Just for fun, here's a comparison between the Masterverse New Eternia Skeletor (left) and the Masterverse MOTU: Revelation Skeletor (right). While they both use the same torso and parts of the upper legs and arms, everything else is different. Even the shades of blue for Skeletor's skin are different. 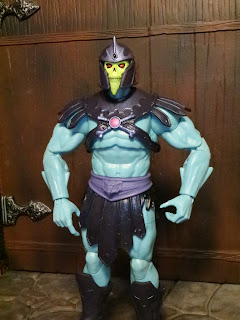 * For the most part the body of this figure, including the harness, are very classic Skeletor. Like the New Eternia He-Man, if you use the alternate head you've really got a very traditional Skeletor figure. The skin is a very light blue and is appropriately muscled while the armored bits have a nice mixture of shades of purple on them. The belt buckle is really well detailed, too. This is one of the few times on a toy that you can recognize it as a sculpted animal-head. The traditional bone harness is removable but the Roman styled battle skirt is not. 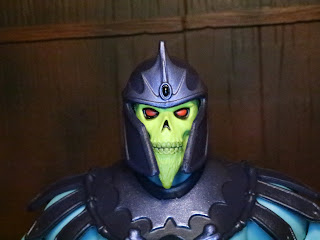 * The helmet is really cool. Rather than a hood, Skeletor is wearing a fantasy styled barbute or barbuta helmet, named  so because it allows the wearer's beard to visibly hang out from the opening. And, yes, Skeletor is wearing a beard here, kind of like the Demo-Man concept sketch (although, according to Taylor, that was intended as a separate character and not as a concept Skeletor. I love the eyes and the nose on this figure. The bright greenish-yellow color is really solid, too. It's a fantastic look for Skeletor. 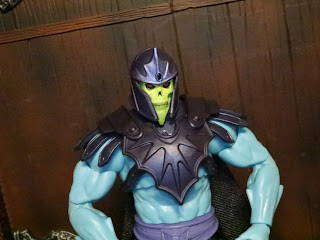 * To change up Skeletor's look a bit more there is an armored chest plate with a cape attached to the back. It fits over Skeletor's harness and matches the flow and design of his standard armor, but seems to offer up a bit more protection. 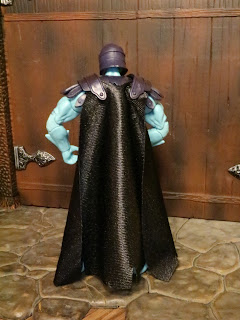 * The cape is an actual fabric piece that is attached to the back of the armor. It's pretty nice looking and just a bit tattered on the bottom. 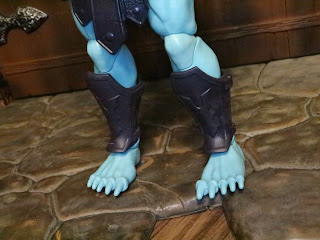 * New Eternia Skeletor has different feet from the Masterverse version and they're pretty gnarly looking. Armored greaves showed up on the skeletal warrior in Taylor's Torak drawing and in the Skeletor concept art piece and they definitely mesh well with the helmet and chest armor for a more barbarian inspired feel. 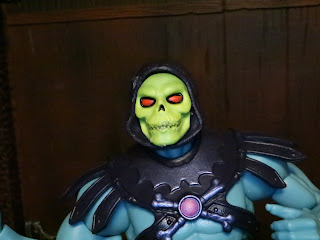 * There's a classic head included, too. It's a pretty good Skeletor portrait with great eyes and some pretty spooky teeth. 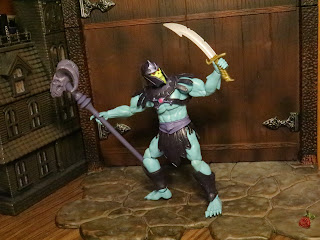 * Skeletor's articulation is pretty much the same as last year's MOTU Revelation Skeletor: It feels very modern with double jointed knees and elbows and most everything has a good range of motion to it. It's not as smooth as most of Hasbro's modern offerings but it rivals most everything else out there in this scale and price point. 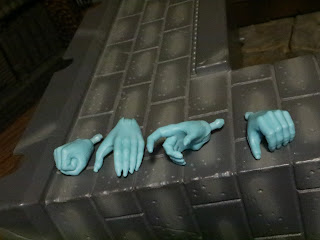 * Skeletor has the same four hands as the Revelation Skeletor: A right fits, a left gesturing hand with an open palm, a right trigger hand, and a standard left grip. They swap out easily, though they don't have painted black nails like the MOTU Revelation Skeletor. 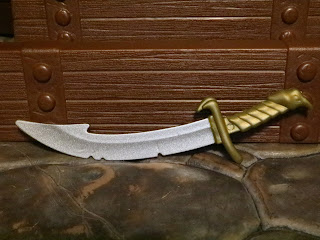 * The sword is really cool, a scimitar like weapon that appeared in Mark Taylor's drawing "Evil Incarnate" and in the Demo-Man piece. It's a great weapon that's excellent for a more barbarian inspired Skeletor and should catch the eye of connoisseurs of early MOTU art. I love the nicks in the blade and the elaborate hilt. 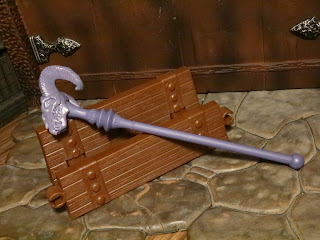 * Skeletor comes with his Havoc Staff as well and it's a pretty decent sized piece. It's as tall as Skeletor and quite heavy. At first I thought it might be too large but it actually looks really good in his hands. 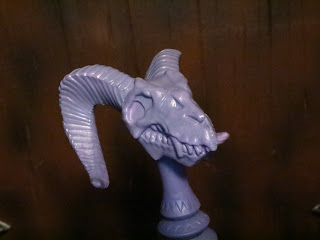 * The head of the staff is an excellent sculpt. There's a bit of a dry brush effect on the horns but mostly it's just solid purple. The detail is really nice, though. It's one of the best looking Havoc Staffs for a Skeletor action figure I've seen. 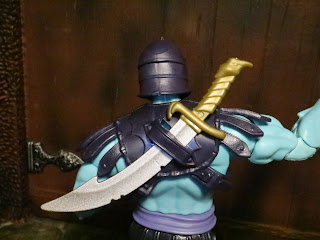 * Skeletor has a slit on his armor for storing his scimitar. Useful! 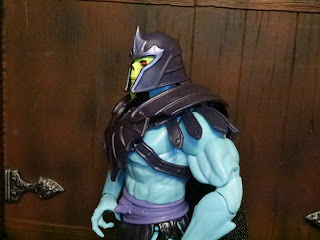 * My only real negative with this figure is that the armored chest plate doesn't really attach to the armor solidly: It simply rests over the harness. There is a slot on each side that fits over the leather strips on Skeletor's shoulders but it doesn't actually attach to them. If you're just posing this guy and putting him on your shelf he ought to be fine but if you're moving him around the armor is going to wobble. 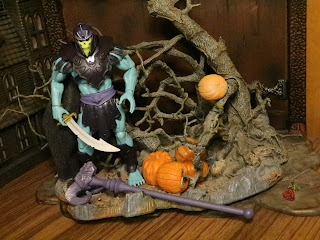 I'm really impressed with Mattel's Masterverse offerings as not only are they doing some cool and unique things with the MOTU brand but the prices are largely staying at a pretty reasonable price point while also still coming with multiple portraits and a nice amount of accessories. I really like this Skeletor. He's not my favorite Skeletor design ever or anything but he's a great tribute to some of the early concepts for Skeletor from Mark Taylor's artwork and yet he also adds in a few new ideas, too, such as the cool helmet and the chest armor. This is a pretty Epic figure that's a lot of fun. You can always use more Skeletor in your collection, right?

If you're a fan of Skeletor/Keldor then make sure to check out Snake Mountain, my archive of all of my Skeletor reviews.